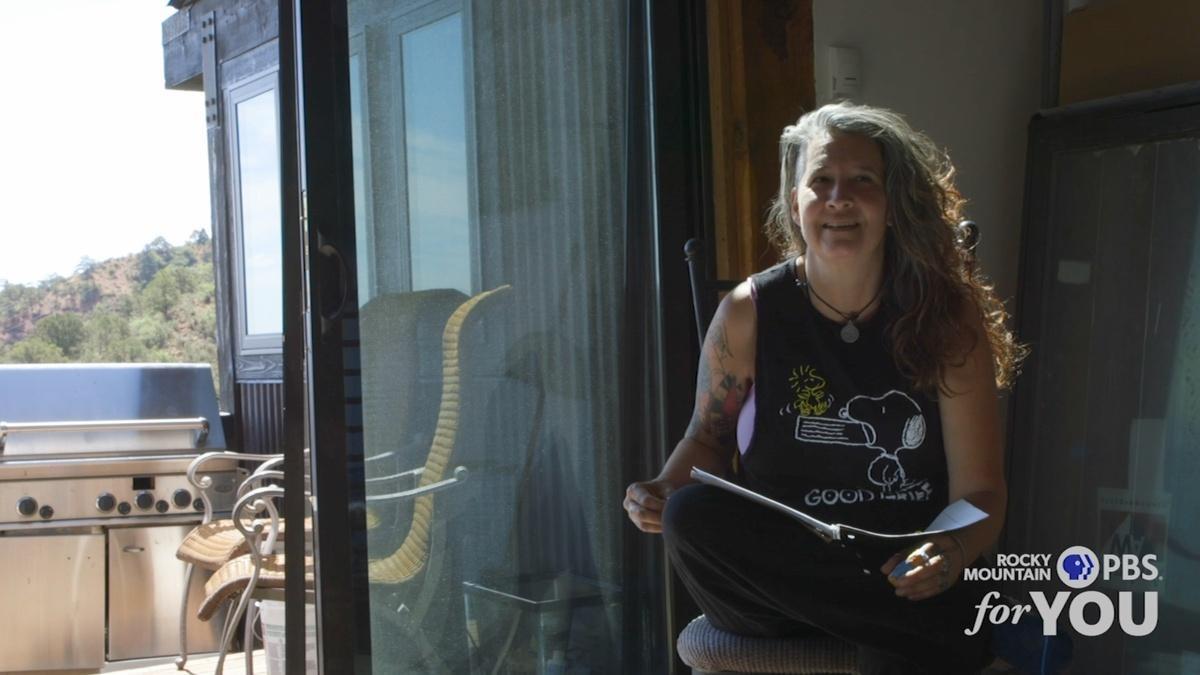 Watch: A woman experiencing homelessness in Colorado during COVID-19 shares her story.

Many organizations and programs aimed at helping the homeless have been restricted, or even permanently closed, as a result of COVID-19. As services become scarce and evictions threaten to destabilize Coloradans, advocates say now is the time for affordable housing policy.

For Kristy Milligan, CEO of Westside CARES, providing “essential services” to the community comes to life or death.

“Yesterday, a young woman presented at our office, hungry… she was worried about staying alive,” Kristy says.

As head of a direct services non-profit, Kristy says she finds it important to personally understand the struggles faced by those she serves — some of the most vulnerable populations in Colorado Springs.

“With so many local helping operations thwarted by coronavirus, I didn’t know what pantries might be open,” Kristy says. “Other than ours, which runs on Tuesdays and Wednesdays.”

This was a Thursday.

The conversation with the 211 operator, she says, went something like this:

Operator: Well,it looks like Westside CARES is your best bet.

Kristy: “No sir, I’m the CEO of Westside CARES, and we don’t have a pantry until next Tuesday. Anything else?”

Operator: Ecumenical Social Ministries is just a few miles away and…

Kristy: “I know where it is. It’s closed. Permanently. Forever and ever. Anything else?”

Kristy: “And just to confirm, your food box delivery program, which is ending next week… you’re unable to deliver to people without a fixed address, right?”

Operator: That’s true. If they were staying at a motel or something, we could probably…

Kristy: “No, that’s all right. Thanks for your time.”

Kristy says the call lasted a total of seven minutes, but if she was a person experiencing homelessness, “it would have robbed me of an entire day… Walking to Westside CARES only to discover that there was no pantry until Tuesday, and then walking to ESM only to discover it was permanently shuttered.”

Sudden closures of emergency resources, Kristy says, have become common in the midst of the virus pandemic. For example, a food truck that had been providing meals to dozens of homeless families suddenly stopped showing up, with no explanation. Kristy didn’t know what to tell those who arrived hungry and desperate.

And programs set up to provide assistance, she says, often miss their mark.

When she first heard stimulus checks would be provided automatically to those living on SSI (Supplemental Security Income) or SSDI (Social Security Disability Insurance), Kristy says she celebrated, thinking, They’re throwing people who need help the most a bone!

But it simply didn’t happen. The money has eluded many who make less than $12,000 a year and aren’t required to file a tax return — the basis for an automatic stimulus check deposit.

The IRS set up a website to help people locate their money. Kristy says her agency has assisted over a dozen people in this process, which requires email, internet, a phone number, and a physical address — each its own barrier for someone experiencing homelessness. And, Kristy says, it has been impossible to follow up on the status of some of the claims she has helped people file.

“Yesterday, I got a call from a man who’s still waiting on his check,” she says. “We filed his return and it was accepted, but his check status is showing up on the site as ‘on hold.’ No explanation. No human being we can talk to about it. Just a strong, clear message that reverberates throughout the stimulus check debacle: if you’re poor, you don’t much matter.”

Westside CARES continues to provide critical services for those without a house — including a postal address where they can receive a check.

Shelly, who has been living in her car off and on for four years, says she has relied on Westside CARES to survive. “They let me transfer my mail because I couldn’t afford the mailbox anymore,” she says. “They are there to make sure that people have food.”

Shelly says Westside CARES is helping her find a place to live, because what she really wants is to move out of her car. She just found a job cleaning hotel rooms, and is hoping to save enough to get a place — an increasingly hard feat in Colorado Springs, where a one-bedroom apartment averages $1200 a month.

If rental prices remain out of reach in an unsteady economy, Kristy says, “we are going to be looking at a lot more people experiencing homelessness. Now is the time to act to assure that affordable housing is available.”

By Executive Order, Governor Polis allocated $10 million from the State of Colorado’s CARES Act Coronavirus Relief Fund for rental, mortgage and other assistance for low-and moderate-income households. This included money for short-term rental housing subsidies, utilities assistance, and improvements to existing shelters to make them more apt to accommodate safety restrictions from COVID-19. It is unclear if these provisions will be extended beyond the current July 31 expiration.

If not, Kristy says, the state is ill prepared to deal with the housing crisis on the horizon.

“Increasingly, we are going to see a rash of evictions at the tail end of this,” Kristy says. “Governments at every level need to be looking at incentivizing affordable housing, and truly affordable housing. Dollar for dollar, it’s much cheaper to keep people housed in the first place.”

According to the US Census Bureau, an estimated 16% of Coloradans missed June’s rent or mortgage payment, or have slight or no confidence that their household can pay August’s rent or mortgage on time. Meanwhile, rental assistance is the number one request on Colorado’s 211 information line.

As local, state, and federal systems struggle to accommodate those currently living on the brink of eviction, Kristy stands humbled by the generosity of community members. “For every failure in our systems,” she says, “there are people — ordinary citizens — who are standing in the gaps. And that’s a hopeful thing.”

“We are definitely seeing a lot of new relationships being borne of this crisis. People who are saying, ‘I don’t need the stimulus money, let me make it available for someone who needs help with rent.’ We are seeing brand new donors. We are seeing people bringing food to pantries who have never been to pantries.”

Kristy says, of course, they’re seeing the other end, too — “folks who never thought they would have to go to a pantry are showing up and asking for help from their community.”