A look at the future of the 'transformational' 5280 Trail, which could take a decade to complete

DENVER — The final stretch of the walk from Union Station to the Buell Public Media Center on 21st and Arapahoe has become a lot shadier...in a good way.

More than 30 Shumard oak trees line the sidewalk on 21st Street from Lawrence to Larimer. And although they are currently in above-ground tree boxes (i.e., not there permanently...yet), they are a small part of what city leaders believe will be an enduring, “transformational” addition to Denver: The 5280 Trail.

A project of the Downtown Denver Partnership (DDP), the 5280 Trail is a 5.280 mile trail that, once complete, will encircle downtown Denver, connecting neighborhoods and landmarks. When the design process for the trail began in 2019, it drew comparisons to New York City’s High Line. In an interview with Rocky Mountain PBS last month, officials with the DDP said the project that most inspired them was the Cultural Trail in Indianapolis.

The 5280 Trail is designed to connect high-traffic neighborhoods like La Alma/Lincoln Park, Capitol Hill and LoDo, to name a few, while also making stops at popular destinations like Union Station, Coors Field and the Colorado State Capitol building.

“We’re in desperate need of open space and park space in our city and near our neighborhoods, and this is really meant to provide that space,” said Andrew Iltis, the director of economic development at DDP.

“We began to look around the country to see some really great examples of how these types of trails were being integrated into urban environments,” explained Tami Door, DDP’s president & CEO (Door is leaving her post in November).

“This is a very big vision,” Door added. “This is the type of infrastructure project that will transform our city and the way our neighborhoods and people connect with each other.” In terms of the size of the project and how it would change the city's urban landscape, the 5280 Trail, Door said, is "on par" with the 16th Street Mall.

Projects of this size come with a big price tag and a long timeline. Though the tree boxes on 21st are emblazoned with Coming Soon!, Door told Rocky Mountain PBS the goal is to have the trail totally completed in 10 years, noting that certain sections, including the one on 21st Street, will be entirely built out before then.

As for funding, DDP officials said the 5280 Trail will come to fruition through a combination of public and private dollars. Door said that “hundreds of thousands of dollars” from the private sector have already been put forward for early planning and exploratory trips to other cities like Indianapolis.

When it comes to public funds, the DDP is banking on $7 million earmarked for the 5280 Trail in the City of Denver’s $450 million General Obligation (GO) bond package. The bond package, which also includes about $37 million for purchasing and improving homeless shelters, as well as plans for a new arena at the National Western Center, needs to be approved by voters in November. You can read a sample ballot here (The 5280 Trail funding is included in Question 2C: "Constructing a segment of an urban trail and pedestrian walkway in downtown Denver").

If passed, that $7 million will go toward building out the 5280 Trail on Acoma Street from 10th Avenue to 12th Avenue. The city has already committed $850,000 to the planning (but not the construction) of the 21st Street segment—which will extend from Benedict Fountain Park to Coors Field—and that will be the first part of the trail to be developed.

“Here’s the power of that: Once the public starts to see what something really looks like, the private dollars start to come faster and faster,” Door said. “Especially people who have investments in different neighborhoods and they’re excited to bring the trail to their neighborhood.”

Presently, no money has been identified for the actual construction of the 21st Street segment. Denver City Councilman Chris Hinds, who represents District 10, said the segment on 21st is estimated to cost $30 million to complete. If the voters approve the Acoma Street segment's funding as part of the GO bond package, "the segment will be 100% realized," Hinds told Rocky Mountain PBS.

“We have 100% no concerns that we will get the money,” she said. “This vision is very powerful. It’s transformational. It supports so many varied aspects of our community: visitors, employees, residents.”

People who live and work on this particular section of 21st are used to these types of transformations: For two months in the summer of 2017, 21st between Larimer and Lawrence closed to traffic and became "The Square on 21st," another one of DDP's projects. The Square on 21st was designed to show the potential of the 5280 Trail. Since then, the same section of 21st has closed to traffic in order to create a pop-up park during the MLB All-Star Game in 2021, and it hosted this year's Oktoberfest.

What the 21st Street section of the 5280 Trail will look like is still to be determined. On August 19, The Department of Transportation and Infrastructure (DOTI) held a public meeting where people could provide feedback on initial concept designs for the area. The agency has also issued surveys for people to submit ideas. You can read results of the first survey here.

There are currently two options for the trail's 21st Street segment. The first option is the “trail” design, which would close the street to motorists (excluding emergency vehicles) and create a shared trail for cyclists and pedestrians. The second option is called a “shared street” in which cars would be allowed.

You can take a community survey about the 21st Street design options here. The survey closes Tuesday, September 28. What we do know is there will be lots of trees.

Brett Boncore is a senior engineer with DOTI and the project manager of the 5280 Trail on 21st Street. He told Rocky Mountain PBS that reintroducing a tree canopy to downtown Denver will be a "huge piece" of the 5280 Trail.

And, Boncore added, The 21st Street segment of the 5280 Trail will help inform the design of the remaining parts of the trail.

“Whatever is designed on 21st, we can learn from and apply to the rest of the 5280 Trail,” Boncore said. But that doesn’t mean the design for the 21st Street section of the trail will extend for all 5.28 miles. Some sections could have the shared street design, while others could have car-free trails, Boncore explained.

Below are some of the potential designs of the 5280 Trail in individual neighborhoods, as detailed in DDP's vision plan. 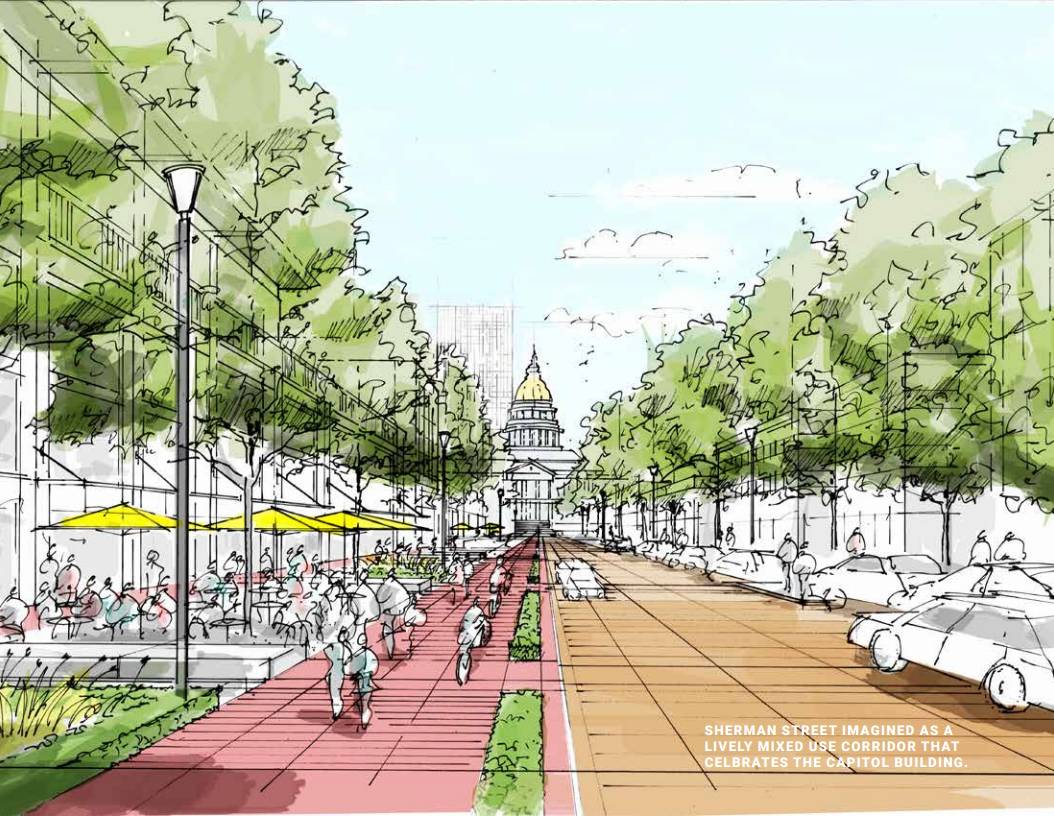 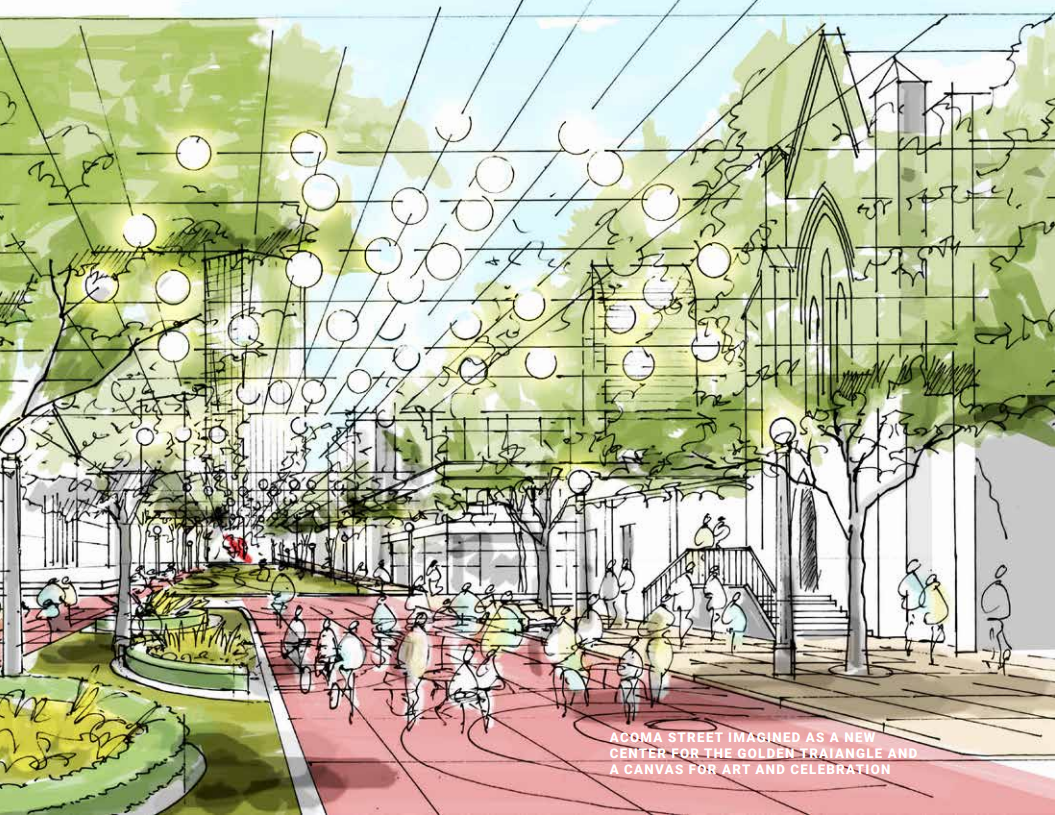 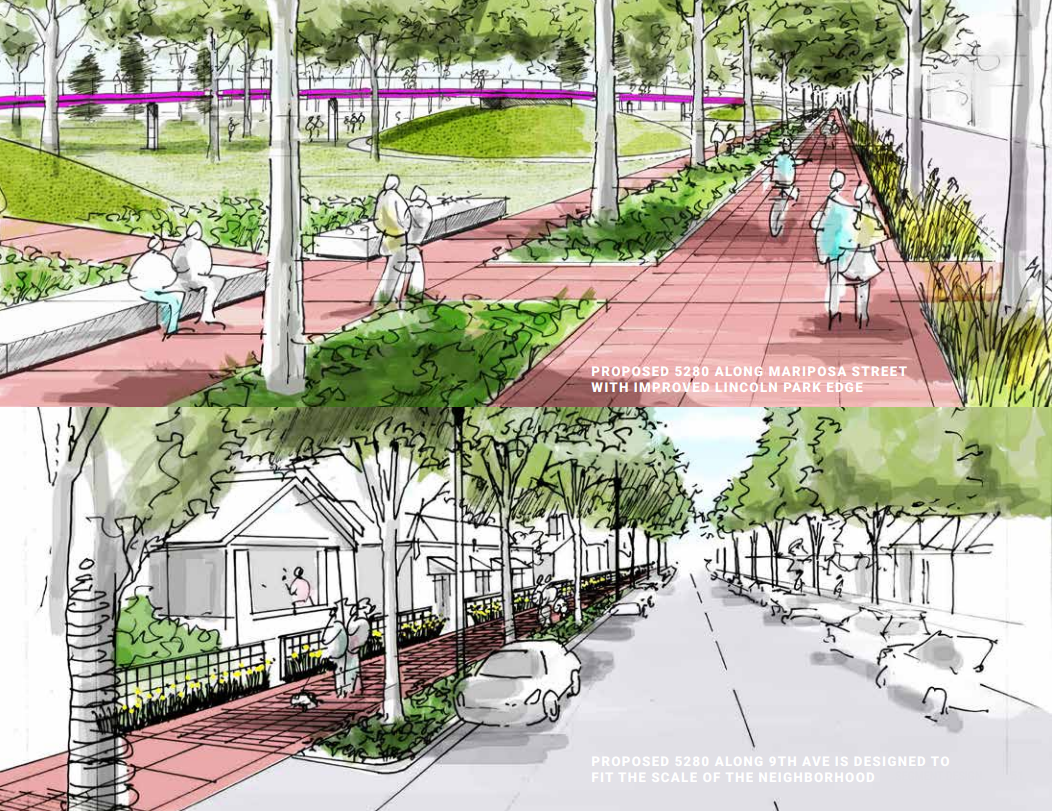 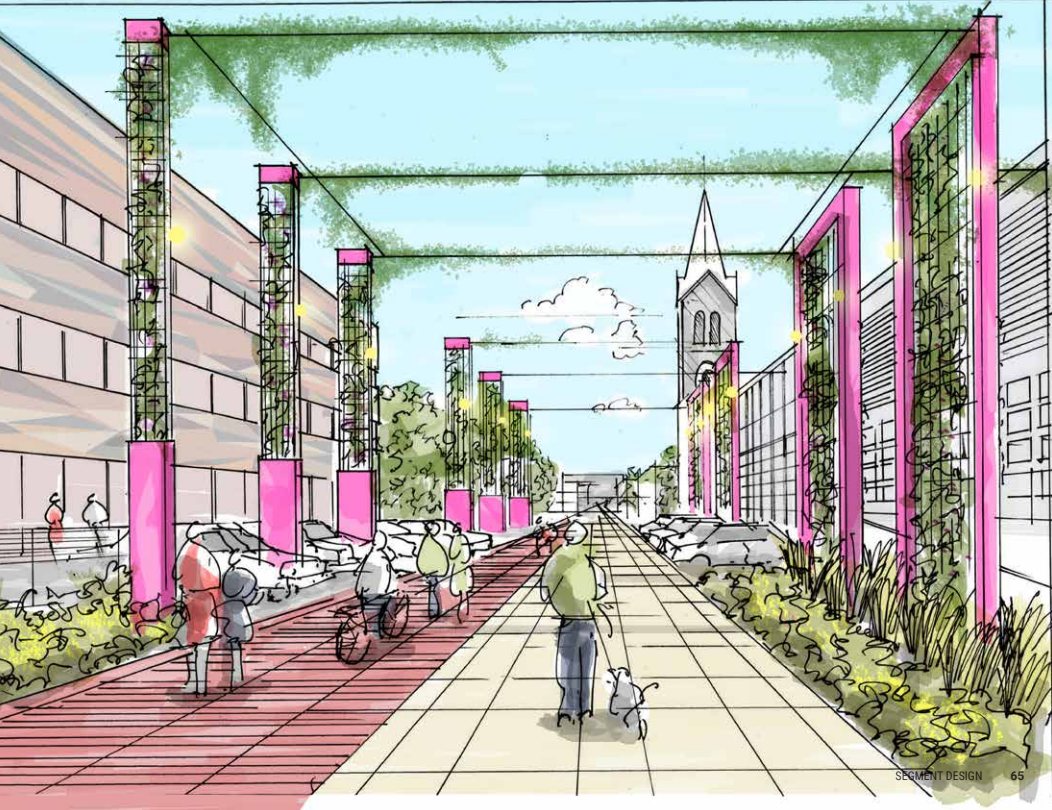 “It won’t look the same along the entire route,” added Iltis. “It will definitely relate to the place and that's really important. That’s important to make it interesting as you move around the trail, but it’s also important to make sure that the community feels that value.”

In La Alma Lincoln Park, for example, the hope is to commission new artwork that fits in with the culture and history of the neighborhood.

“Every place should feel special and have its own distinct identity," Door said, "but yet still be threaded together with a commonality of what it means to be Denver.”

Kyle Cooke is the Digital Media Manager at Rocky Mountain PBS. You can contact him at kylecooke@rmpbs.org.