DENVER — Few artists are able to capture a moment like Thomas Evans.

The artist, who paints under the name Detour, specializes in large-scale public art. His murals of people like George Floyd, Breonna Taylor, Elijah McClain and John Lewis became popular landmarks over the last year and a half, especially during the racial justice movement in the summer of 2020.

But while many people may think of those nationally known figures when they think of Detour’s art, most of his murals depict community members, people he knows personally. The new mural at the intersection of Colfax Avenue and Race Street—the original location of Detour’s George Floyd mural—is no exception.

What was once a gray wall now stands a stunning, vibrant mural of Trina Fernandes, an acute care nurse with Denver Health.

“There’s nothing to describe how amazing his art is,” Fernandes said of Detour.

Their friendship dates back nearly 10 years. Fernandes met Detour when she was an undergraduate student at the University of Colorado, Denver. Detour was finishing up his master’s degree and working at the Student Life office. When Fernandes remarked to him that she was impressed by the artwork at the office, Detour admitted that he had made it all.

“I just cannot say how amazing he is,” Fernandes added.

Their friendship continued, but Fernandes never expected that one day, she would be featured in one of Detour’s murals.

“It is very surreal,” Fernandes explained. “Because I feel like there are so many people he could have showcased, but he chose me.”

In the mural, Fernandes is shown holding her stethoscope over her shoulders, similar to how a baseball player might hold their bat in the on-deck circle. With a slight smirk, she looks confident, triumphant. When Rocky Mountain PBS arrived at the mural to record video, a man admiring the work said it looked like Fernandes had “unfinished business.”

"I see someone moving forward, who has been through something," the man said about the mural. "I see somebody going somewhere."

The mural was completed at a time when health care workers who were once celebrated with flyovers and nightly applause from balconies in the early months of the pandemic are now facing threats and violence for simply doing their jobs.

[Related: Health workers once saluted as heroes now get threats]

Fernandes said she knows many people who have left the health care industry over the last 18 months. And she doesn’t blame them. In order to take care of others, you have to be able to take care of yourself, she explained.

But Fernandes—who works 12 hour night shifts and was recently honored as Denver Health's "nurse of the year"—is going strong, and the mural reflects that.

The flowers that once haloed George Floyd’s head are still visible in the mural of Fernandes, if a little faded. Fernandes said she was a little hesitant to have her mural painted over George Floyd.

“I don’t want to take up that space because [Floyd] is such a huge, prominent figure in what has happened within the last year,” Fernandes remembers telling Detour. But it was never his plan for the Floyd memorial to be permanent. On a wall adjacent to the new painting, Detour left a message on a pair of posters.

“I just want to inform everyone that I will soon be changing up the wall the George Floyd mural is on,” he wrote in July. “When Hiero and I first put down paint on this wall we didn’t know the journey it would take us on or how impactful street art would play in our current society.

His message continued on another sign: “I just want to continue telling the stories of the community and will continue to do that through this wall space...I just wanted to give a heads up because I know the community has grown close with this work.”

Detour, who has also painted murals of activists and educators over the past couple years, told Rocky Mountain PBS he prefers to paint murals of people he knows personally.

“The biggest thing for me was just being able to paint a friend; paint someone who never really had a mural but they are amazing community members and just good people,” Detour said. “It’s showing a lot of representation in the neighborhood, the city, the state — just the larger community.”

Detour told Rocky Mountain PBS that the next person he has in mind for the wall at Colfax and Race is Paul Hamilton, a Denver art collector with more than 800 pieces of African art.

Excited to meet up with the inspiration, nurse Trina in front of her mural. pic.twitter.com/KBJViGhkHz

As for Fernandes, she is getting used to texts and phone calls from friends saying they “saw her on Colfax.” But both she and Detour hope that even if someone doesn’t know Fernandes personally, the mural will make them think of someone they do know.

“Maybe they don’t know who I am, but I mean, as a nurse, as a first generation student that [made it] where I am, it’s something that a lot of people can relate to,” Fernandes explained.

Detour said the mural shows “it doesn’t matter what you do, or who you look like or what income level or what occupation [you have]. Basically, you’re able to be celebrated on that scale.”

Kyle Cooke is the digital media manager at Rocky Mountain PBS. You can contact him at kylecooke@rmpbs.org.

Brian Willie is the content production manager at Rocky Mountain PBS. You can contact him at brianwillie@rmpbs.org. 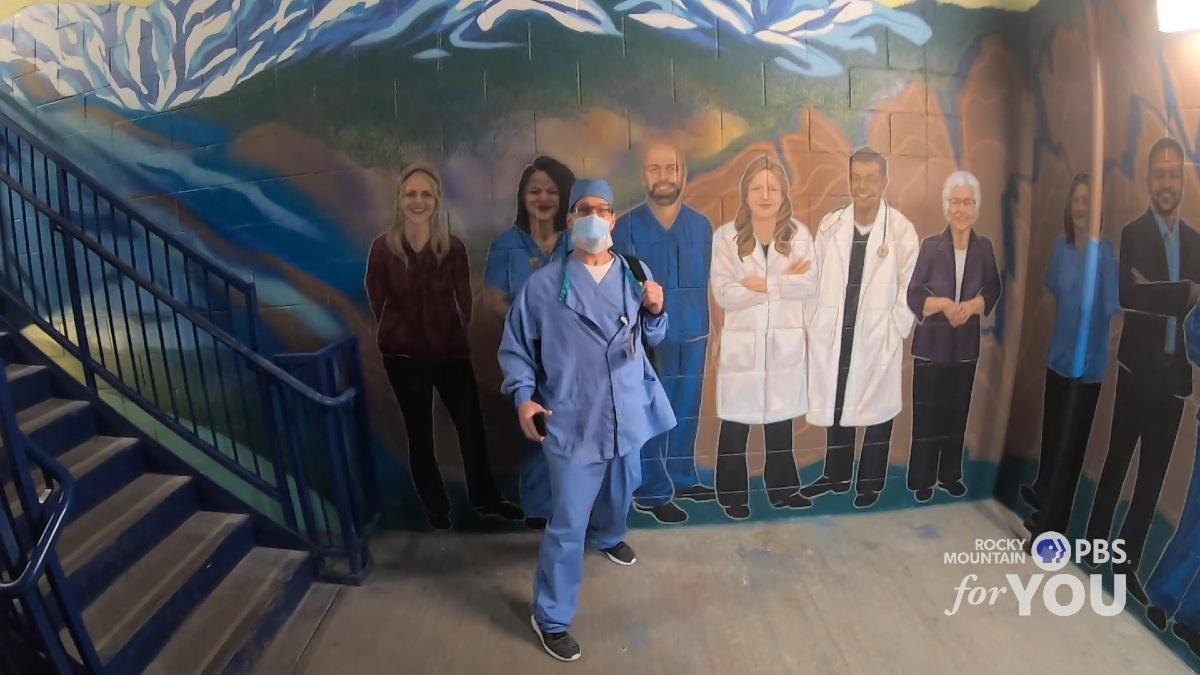