DENVER — “As an Indigenous Two-Spirit person, I think what I’m bringing to most birthing humans is an Indigenous ceremony from start to finish,” Melissa Ivey said.

Ivey is a musician and doula that provides physical, emotional and informational support with a Native and Indigenous lens to birthing individuals and partners. The support Ivey provides is centered around understanding the community member's wants and needs.

Some practices include building an altar, journaling, creating a song for the baby, guided meditation, massage and sharing food. Ivey also loves growing herbs and putting together medicine bags for the community.

Providing support for celebration and healing

When Hathor Brown found out she was pregnant during the first year of the pandemic, she was worried.

“Being pregnant during a pandemic was really scary,” Brown said. “Just even being able to go outside, being able to make it to your doctor appointments was really confusing. Protocols were different depending on where you would go … a whole bunch of things.”

Brown added that she and her husband were also struggling financially due to the pandemic. They were worried about becoming homeless.

During a time of great stress and anxiety, Brown began looking for a doula to help support her during her pregnancy, but the doulas she found were too expensive.

Then she met Ivey.

During their first meeting on the phone, Ivey had Brown do a breathing exercise — take a deep breath through her nose, a breath so deep that when she exhaled it became a hum.

Ivey explained that music can help calm breathing and keep the muscles relaxed while a person is experiencing contractions. Exercises like the one Ivey had Brown do can help clients know how to stay relaxed while giving birth.

Ivey and another doula came to Brown and offered a package of their services, free of charge. They provided massages and food, ran baths and helped take care of Brown's eldest daughter Kimimila. They even organized Brown’s closet.

Brown added that Ivey also made sure to include Brown’s husband throughout the sessions.

“Mel taught that vibration, that humming, to my husband and was like, ‘When she starts to fall, you gotta lift her up. When she's running out of breath – when she can't take that breath – remind her how to take that breath,’” Brown said.

She treasured being given a safe space to process her anxieties and fears.

“Sometimes we get support around us, and we don’t know how to use it because we’re so used to taking care of everything ourselves,” Brown said. “So I had to do some unlearning. And even that unlearning is healing.”

Ivey explained that every session is aimed towards building trust. When that trust is built, Ivey makes sure to have the tough conversation with the client: a plan for if something goes wrong during birth.

But once a plan is made, Ivey encourages the birthing individual to shift and visualize a positive birth – to redirect and reframe the brain so that it isn’t stuck in worry.

Brown recalled that her water unexpectedly broke while Ivey was bringing over some food. In the end, Brown gave birth to her daughter in her bathroom.

She emphasized that despite the surprise birth at home, the day still felt celebratory. Brown’s doulas brought a photographer to the house to take pictures of the home birth. A flower garland was placed above the nursery. Pictures of Brown and her husband’s family members were put up. People prayed.

“We got back to being Indigenous, being people of the land and enjoying childbirth,” Brown said. “I would do it all over again, because I had people around me who made sure to treat it like it was the best blessing.”

Drawing from Indigenous practices and tradition to celebrate birth

Sedona Moreno-Castelan felt that meeting Ivey at a climate strike rally was meant to be.

“Our paths crossed in a very magical and synchronistic way,” Moreno-Castelan said.

The two met at a climate strike rally and discovered that they shared a passion for advocating for missing and murdered Indigenous women, Two Spirits and girls.

When Moreno-Castelan became pregnant, she asked Ivey to be her doula. Moreno-Castelan explained that she wanted a companion that could support her and her husband as they navigated pregnancy and birth. She also wanted a natural birth that felt magical, ceremonial and honored her ancestors.

Moreno-Castelan remembers giving birth to her daughter Yaretzi at the Birth Center of Denver as a transformative and deeply moving process.

Every time she opened her eyes, Moreno-Castelan said, she would see Ivey there making sure she was hydrated, putting a rag over her head, massaging her, or using a rebozo – a traditional Mexican shawl or wrap – to help loosen her hips and provide counter pressure when she was in intense pain.

“There were definitely times when it would get so hard, and I was in meditation the whole time. I was in a trance, almost, bringing her earth side. Really deeply moaning,” Moreno-Castelan remembered.

Looking back, she said that she wouldn’t have had anyone else but Ivey as her doula.

Even after giving birth, Moreno-Castelan said that Ivey helped support her by providing bone broth, sharing herbs, making a yoni steam and encapsulating Moreno-Castelan’s placenta. With the help of another doula, Ivey also performed a Closing of the Bones Ceremony for Moreno-Castelan.

“When you bring someone earthside and you give birth, you're opening a portal through your body, and that portal is remaining open until we do ceremony to physically, emotionally and spiritually close up the body,” Moreno-Castelan said. “And that ceremony was so amazing.”

Ivey wants to continue sharing Indigenous traditions with the community. In order to create a space where Indigenous oral tradition can be preserved and celebrated, they are working on the Recording Womb project, a nine-foot, womb-like dome that offers access to private and communal audio recording and is a space where people can share and exchange stories.

“It follows in the footsteps of my ancestors. It's a safe space and kind of like a red tent tradition. But I'll be having recordings here littered about and, with consent, we'll be recording some of these conversations for our future ancestors to listen to,” Ivey said.

For Ivey, the project unites their service as a doula with their artistry as a musician, storyteller, educator and future ancestor. 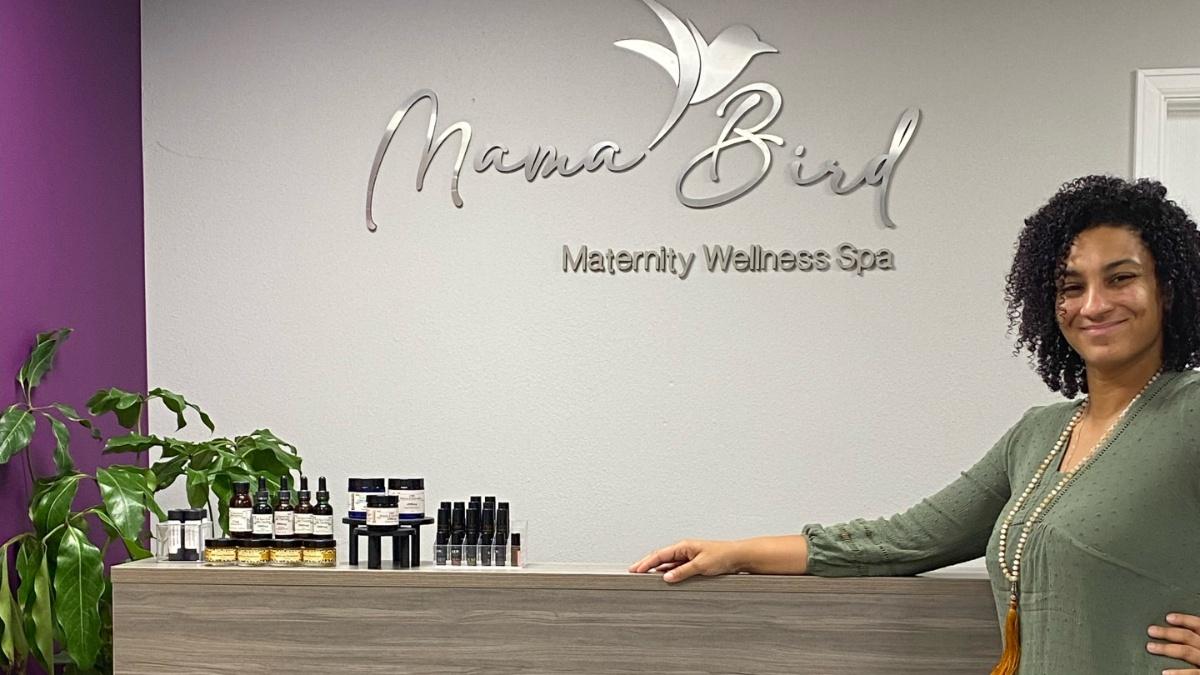