DENVER — For a military kid who grew up moving around the world, there was one place that Janet Damon could always call home, a place where her life’s work continues through the pages of books for the next generation.

“Every time we moved somewhere, I knew I was able to connect to the library. And books have been my friend since a very early age,” said Damon.

She shared childhood stories that included her book-loving father signing her up for a library card as soon as possible when they moved to a new place. Her father, who is Black, also cherished reading. But growing up in Texas when Jim Crow laws were in full effect, he wasn't allowed in libraries. Instead, two librarians drove a book mobile to rural areas and that's how his love for books began. That deep-rooted understanding and love for books was passed on to Damon. It's a love that one can easily see as her face lights up pulling back the cover of a new book in her hands.

“Every person has had a journey and a story,” said Damon. “Through books we can just get a taste of what other people have endured and overcome and be inspired in our own lives.”

Her passion for books as a child transformed into a career as an adult. Damon is the library services specialist for Denver Public Schools, which means she provides diversity and equity training for librarians and paraprofessionals within the district’s couple hundred schools. She also helps to make sure the libraries have culturally-sustaining collections; or as Damon likes to sum it up as, “just ensuring that students can see themselves in our libraries and our collections.”

Why Representation in Books Matters

Janet Damon is a community librarian and advocate for representation in books.

Damon continued to explain the importance of equity in literature: “So for a very long time a lot of the stories were told through a single lens, a single view. And so, we did not see Black students represented in a lot of collections; you didn't see LGBTQ students and their families represented. And so the work was really to help teachers and educators value the labor of looking for and finding books that share these multiple perspectives and lived experiences and bring them into the classroom.”

Outside of her job, Damon, along with three other Black, Indigenous, People of Color (BIPOC) and/or LGBTQ+ librarians, started an organization called Afros and Books. It promotes authors from diverse background and literature to the community.

“Dr. Rudine Sims Bishop, who is a foremost advocate for culturally sustaining collections, talks about books as windows, mirrors and sliding glass doors that we see ourselves, that we see windows into other places and that we can walk through a story into someone else's shoes, and we get to experience a little bit of their lives too,” Damon said in full support of that viewpoint for her organization.

Afros and Books also created several sub-groups to promote their work, including one called "Black to Nature Book Club." Started during the pandemic when children and families were experiencing isolation, stress and anxiety, the club hosts events where people can connect to nature and pick up some free books. Damon said both of those things can help a family more than we may realize.

“We really believe in just nature as a healing space and families being able to have some of these shared experiences together,” she explained. 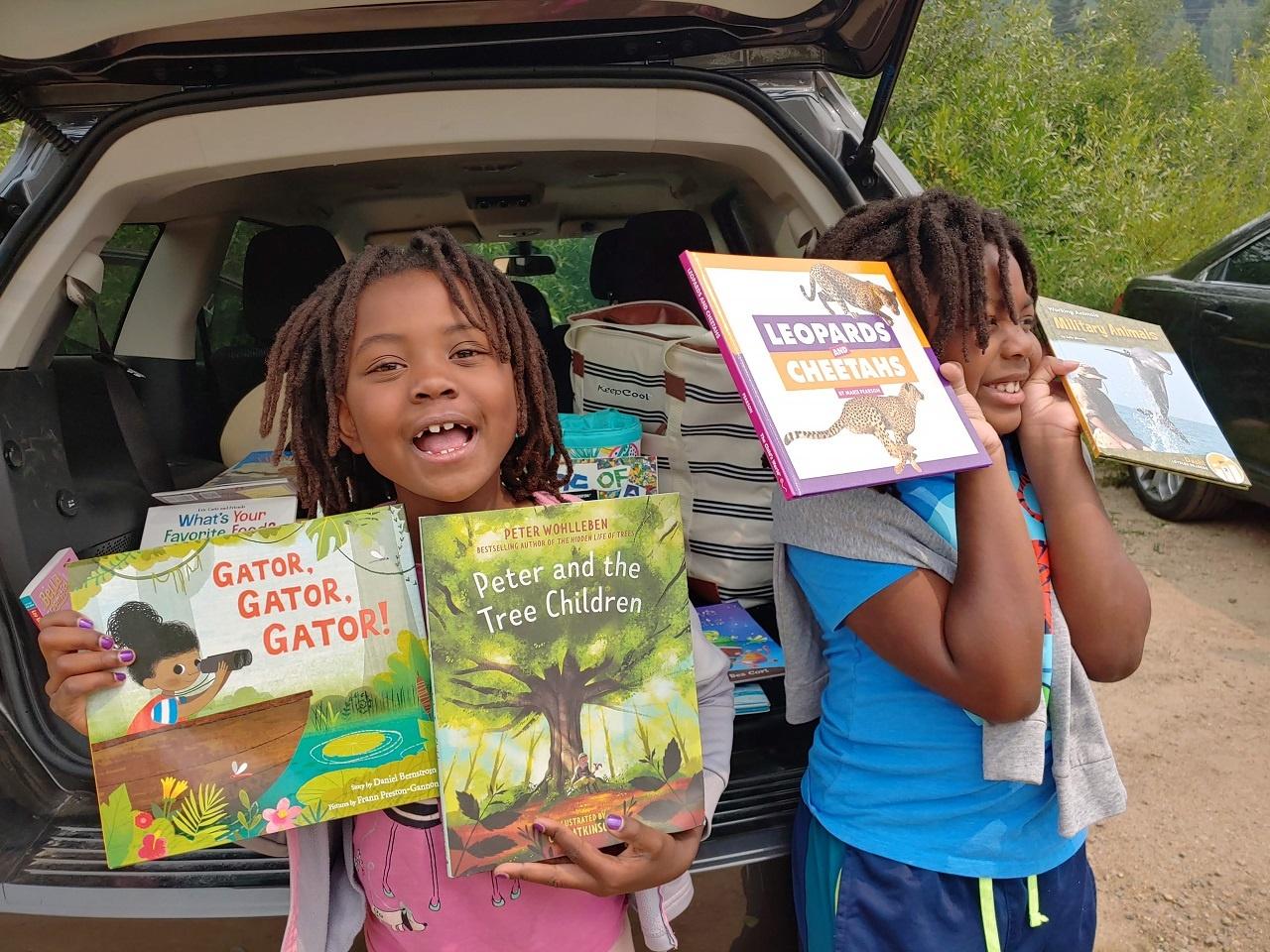 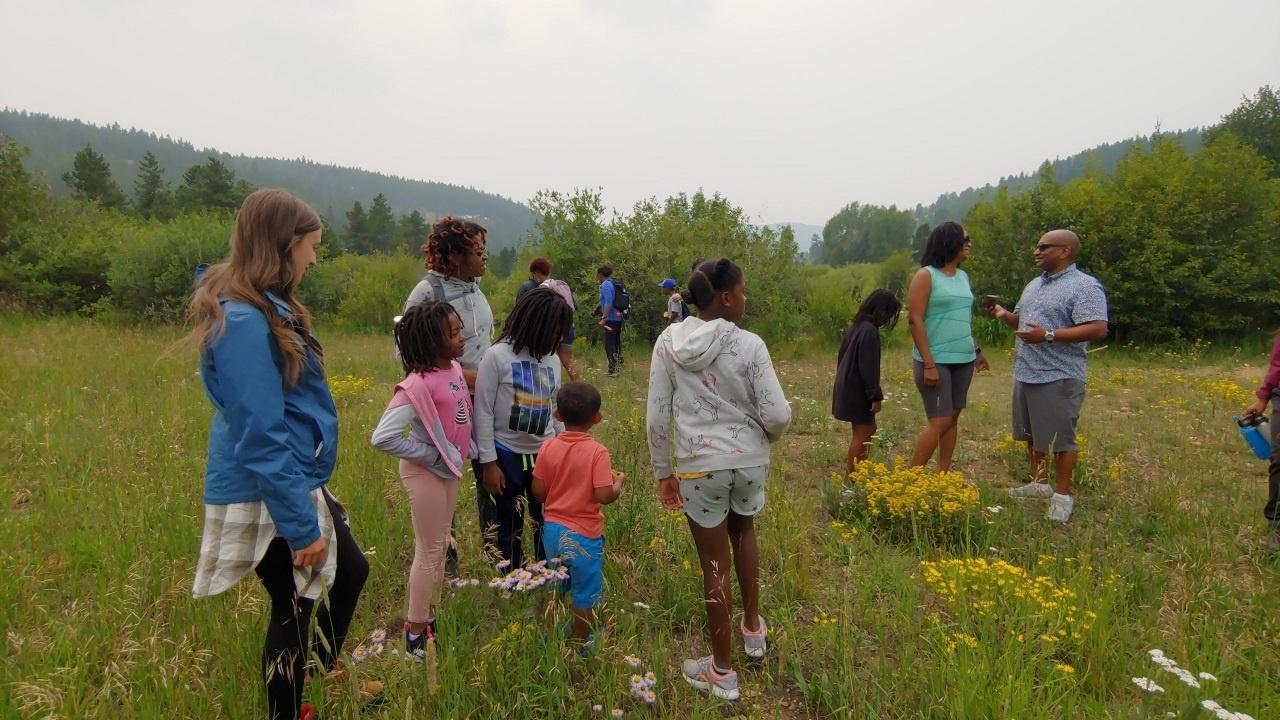 2 / 14
Share This Gallery
Fly fishing, Microbiology and Peotry of the Harlem Renaissance at Lincoln Hills 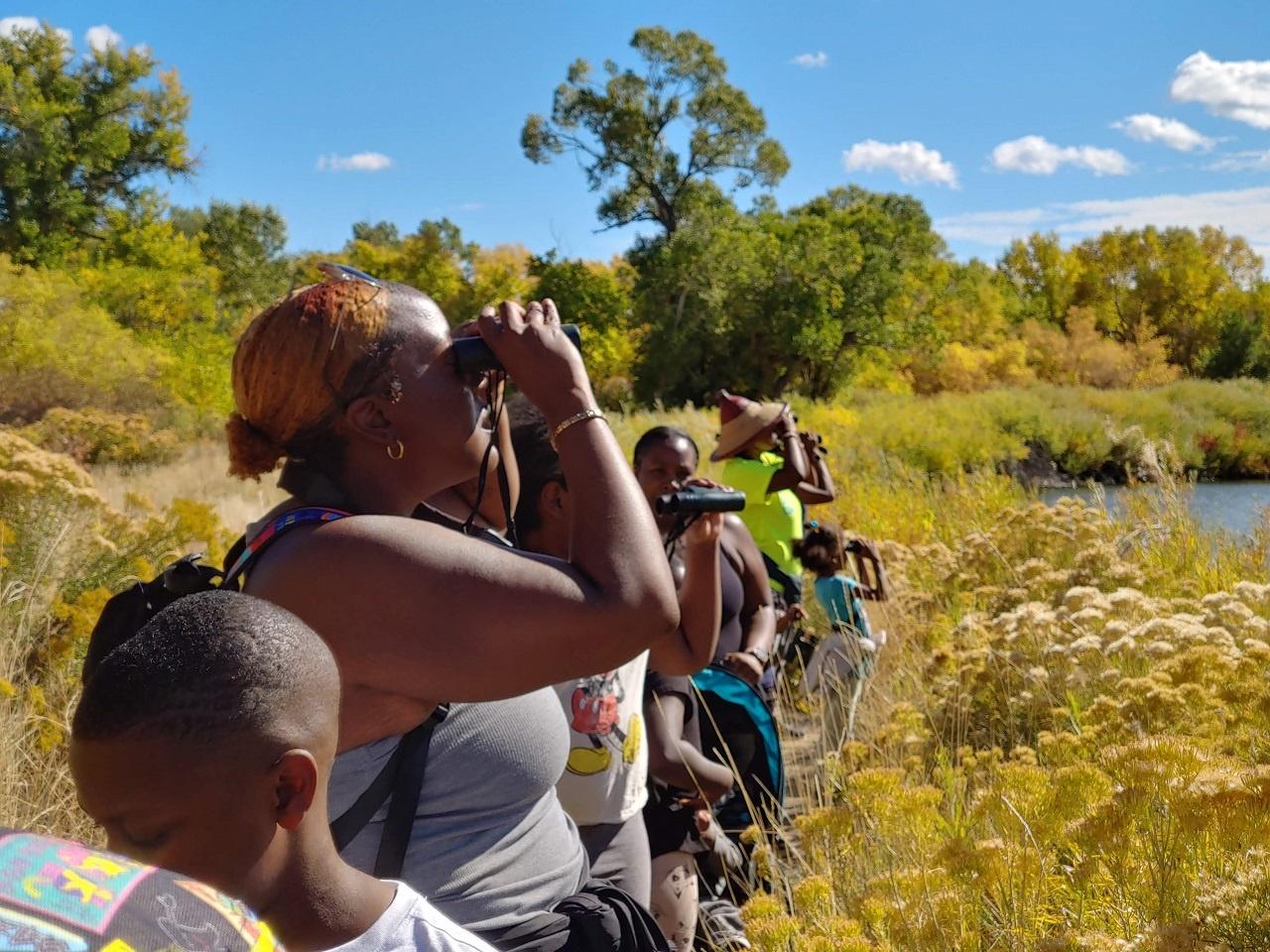 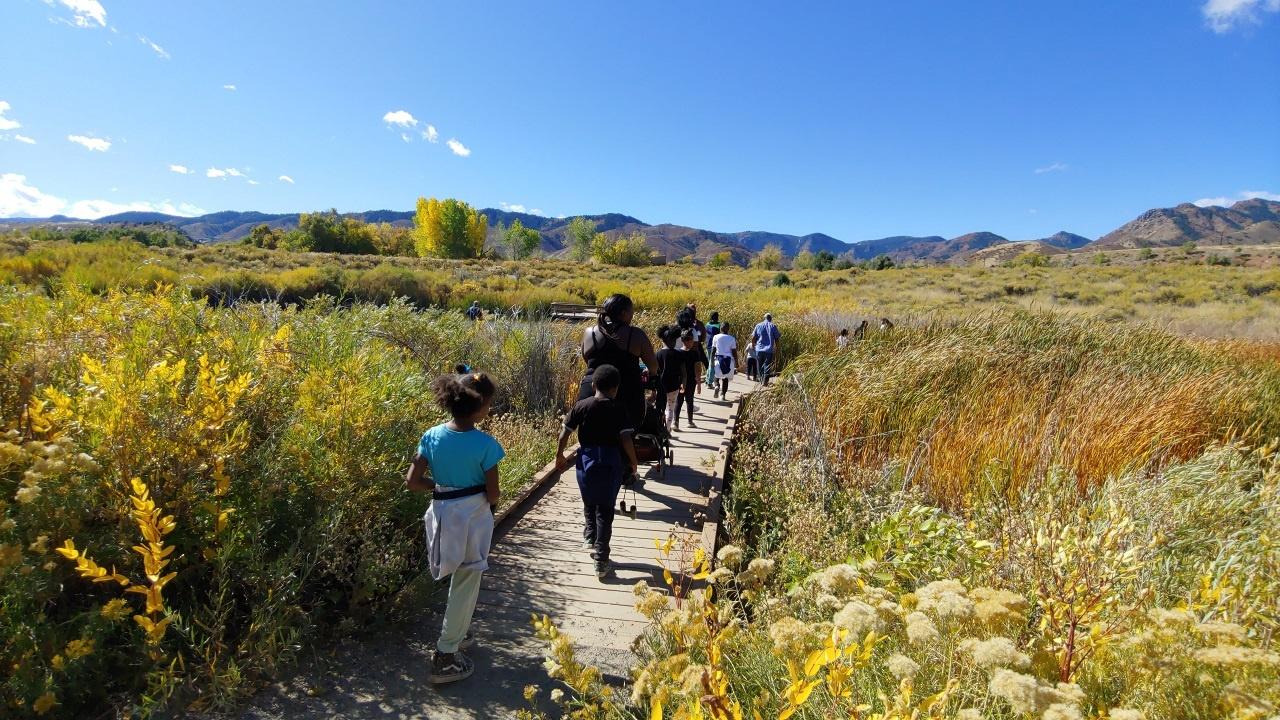 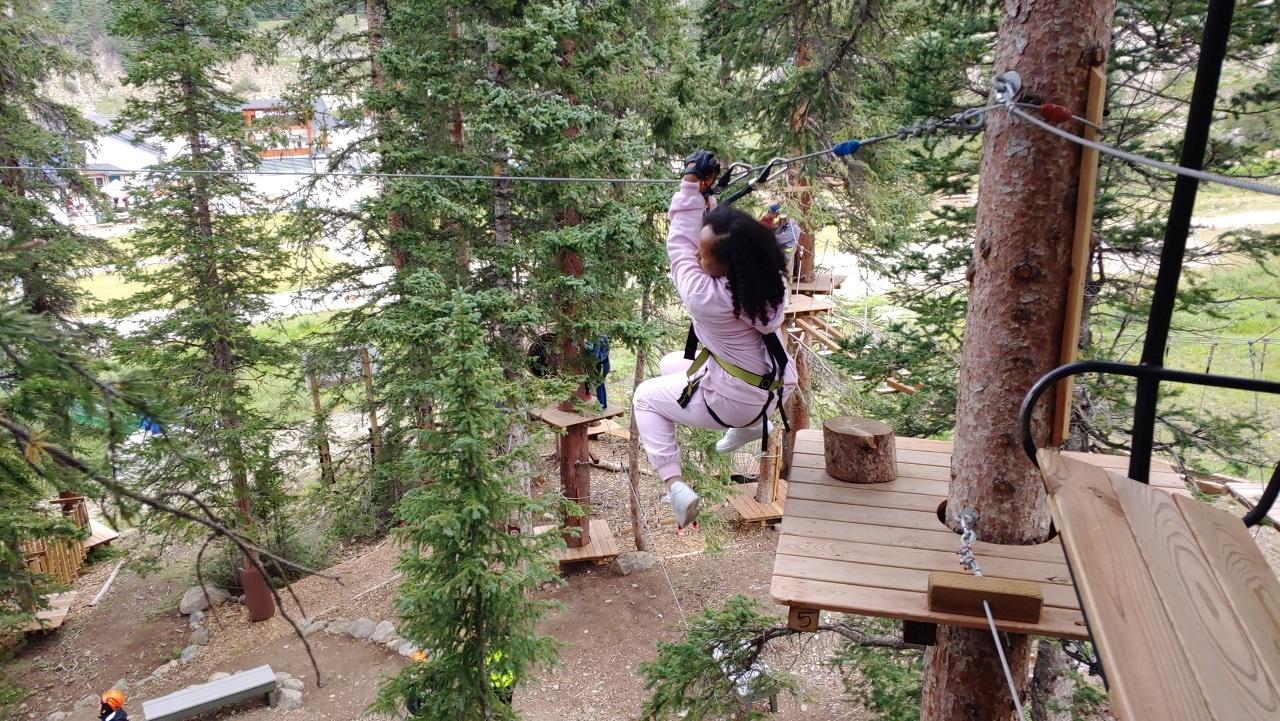 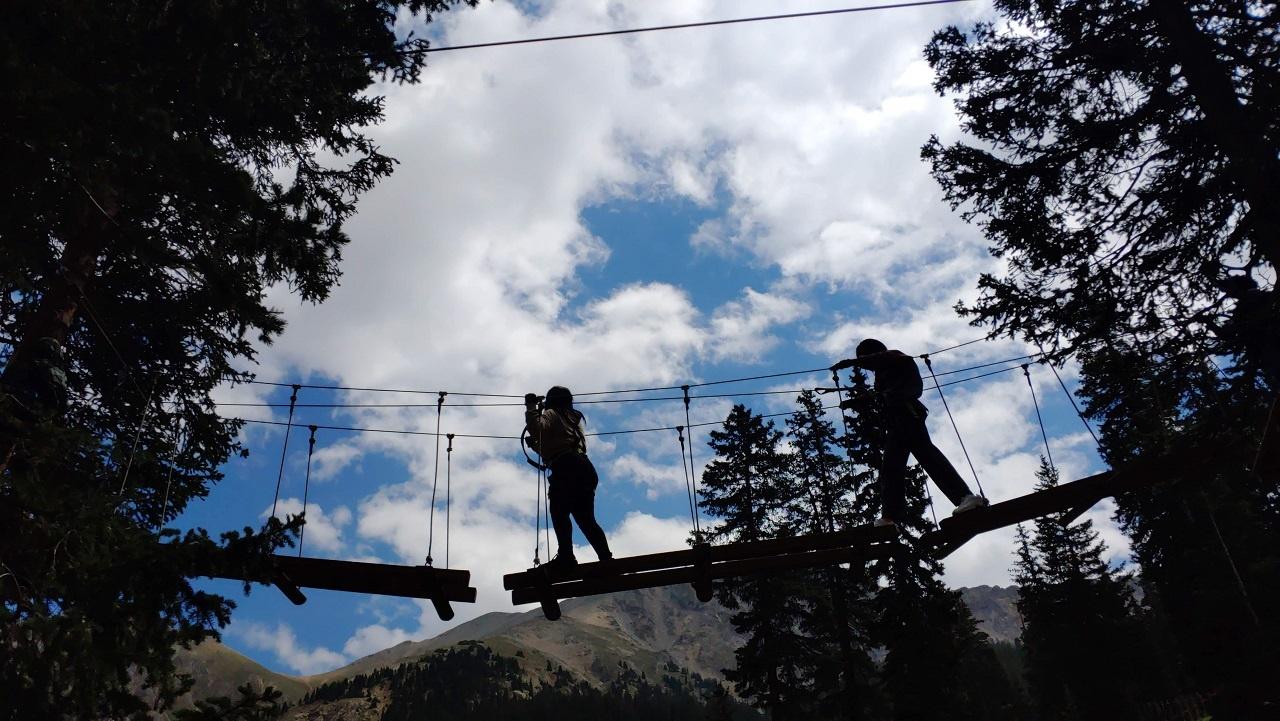 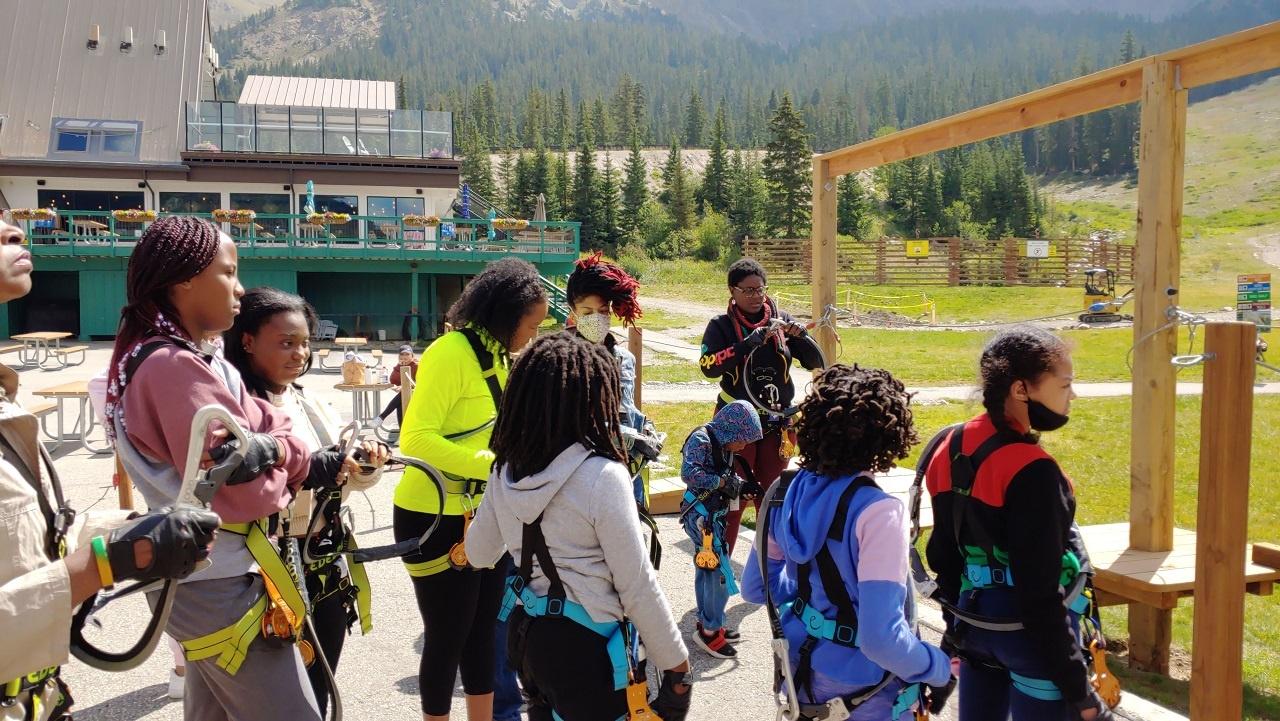 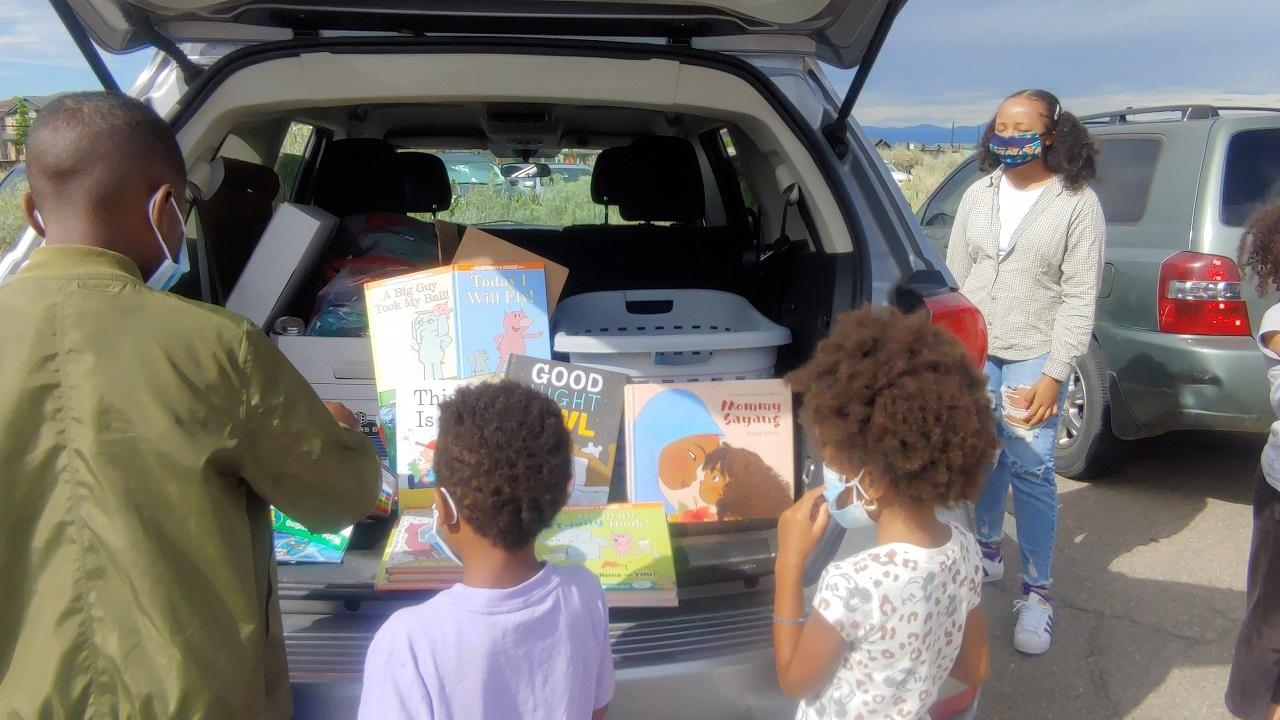 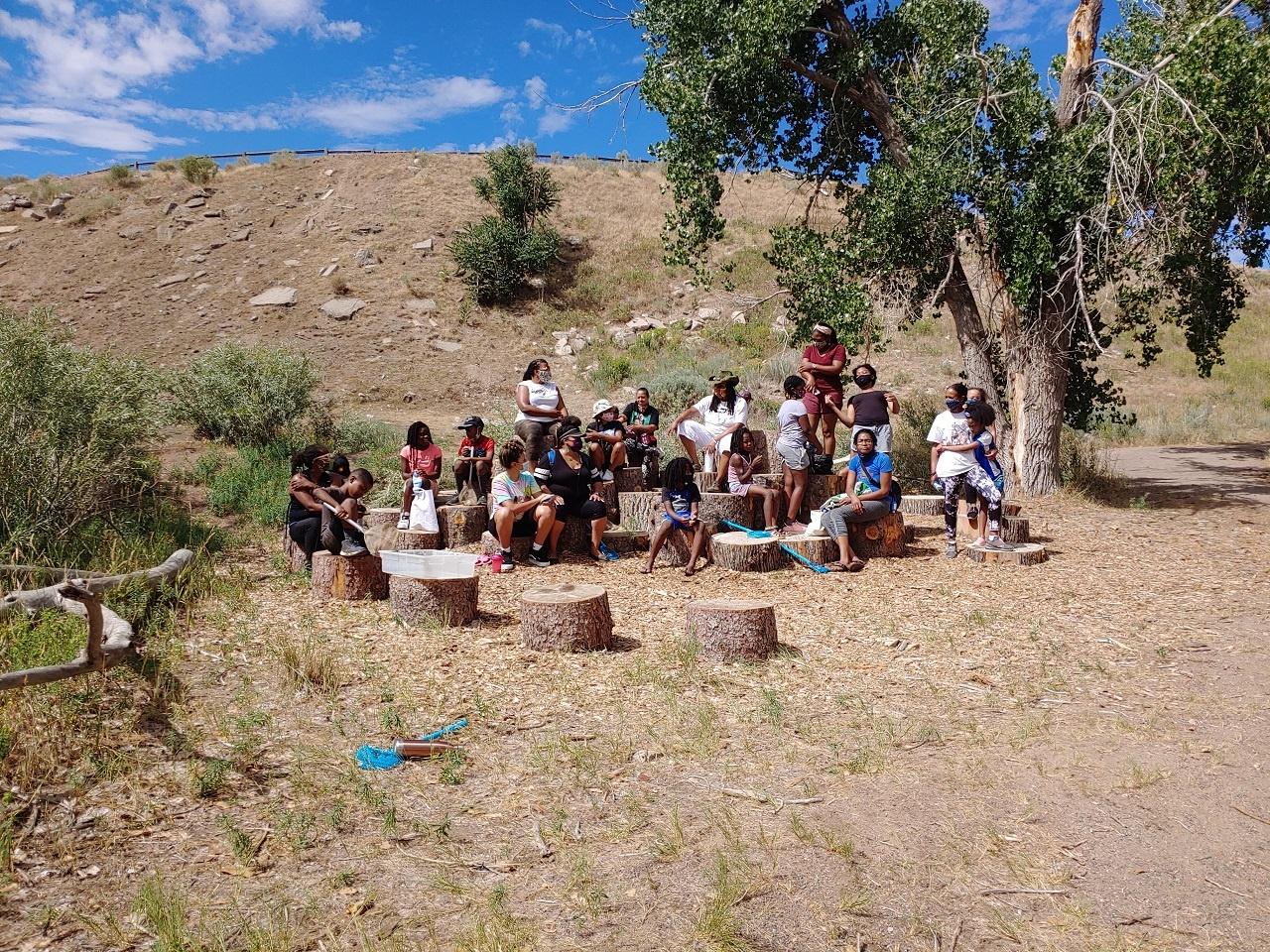 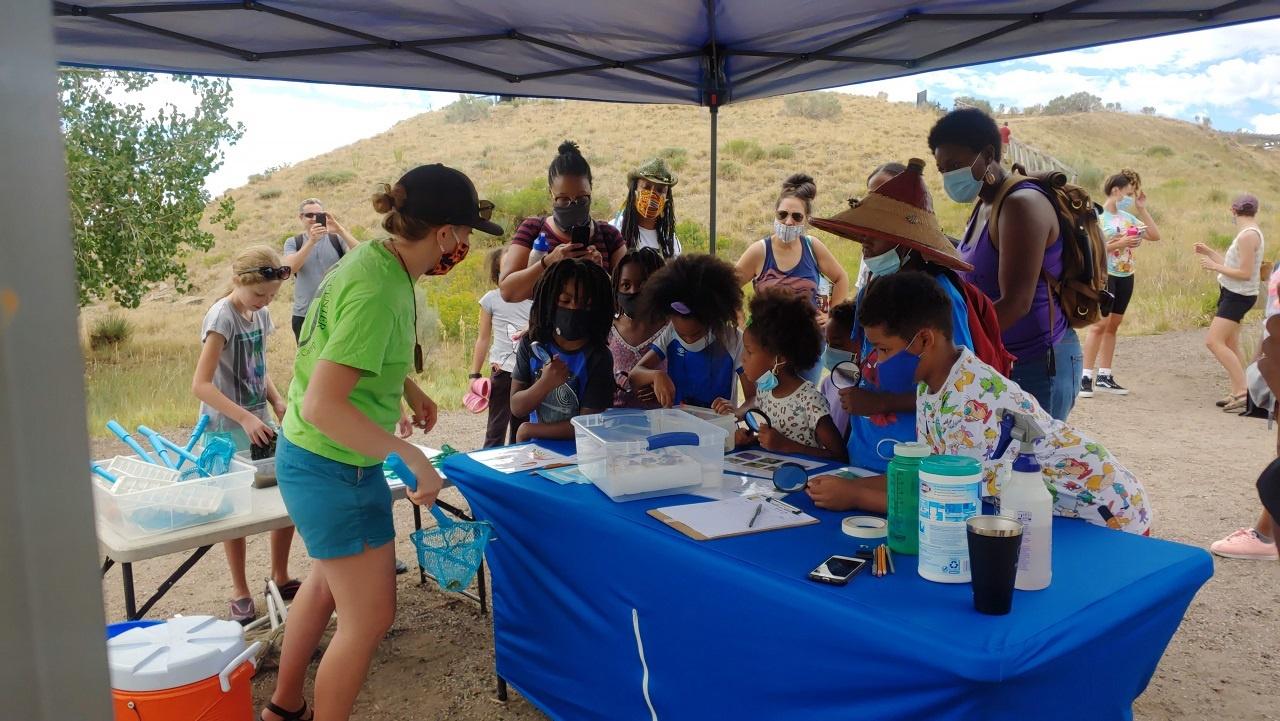 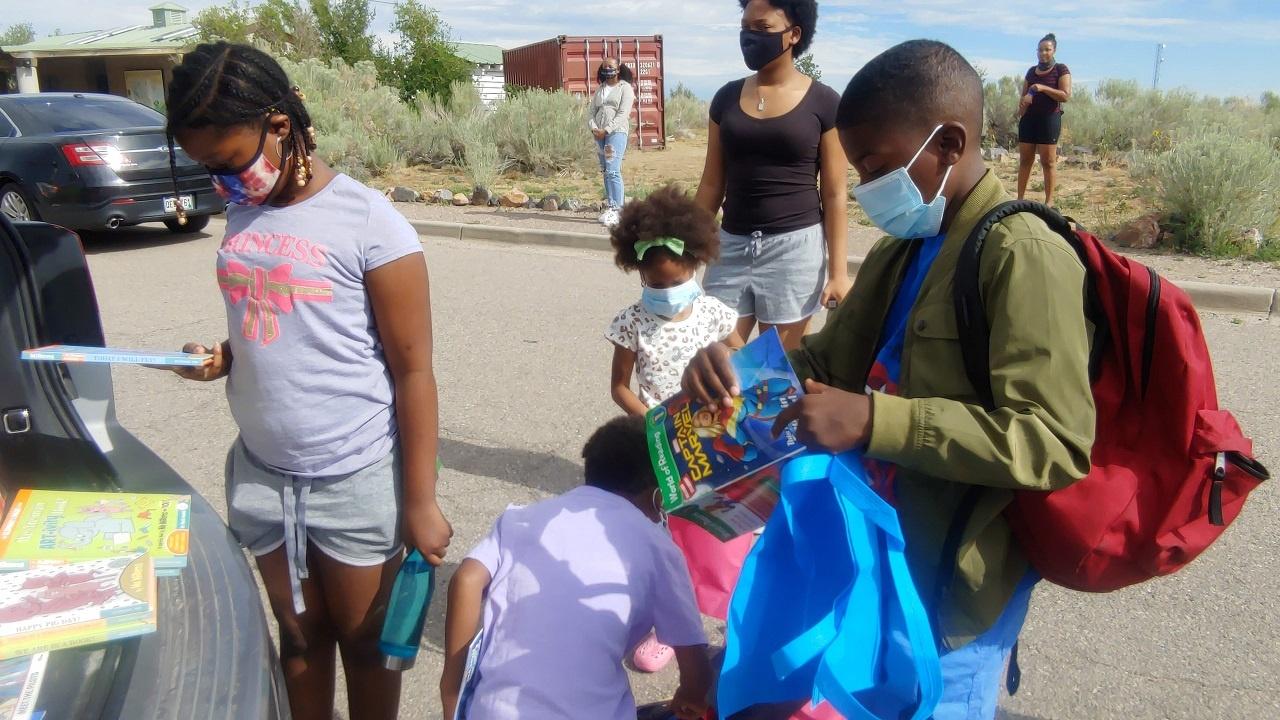 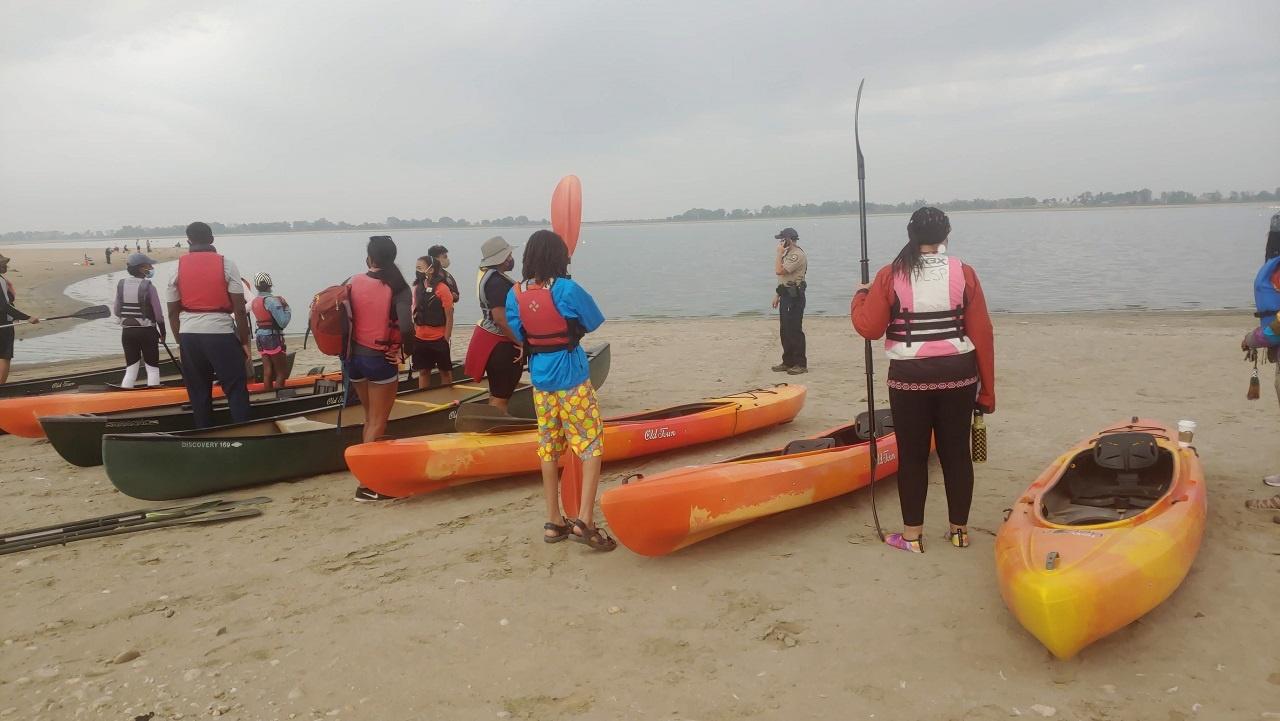 12 / 14
Share This Gallery
Kayaking and canoeing at Barr Lake 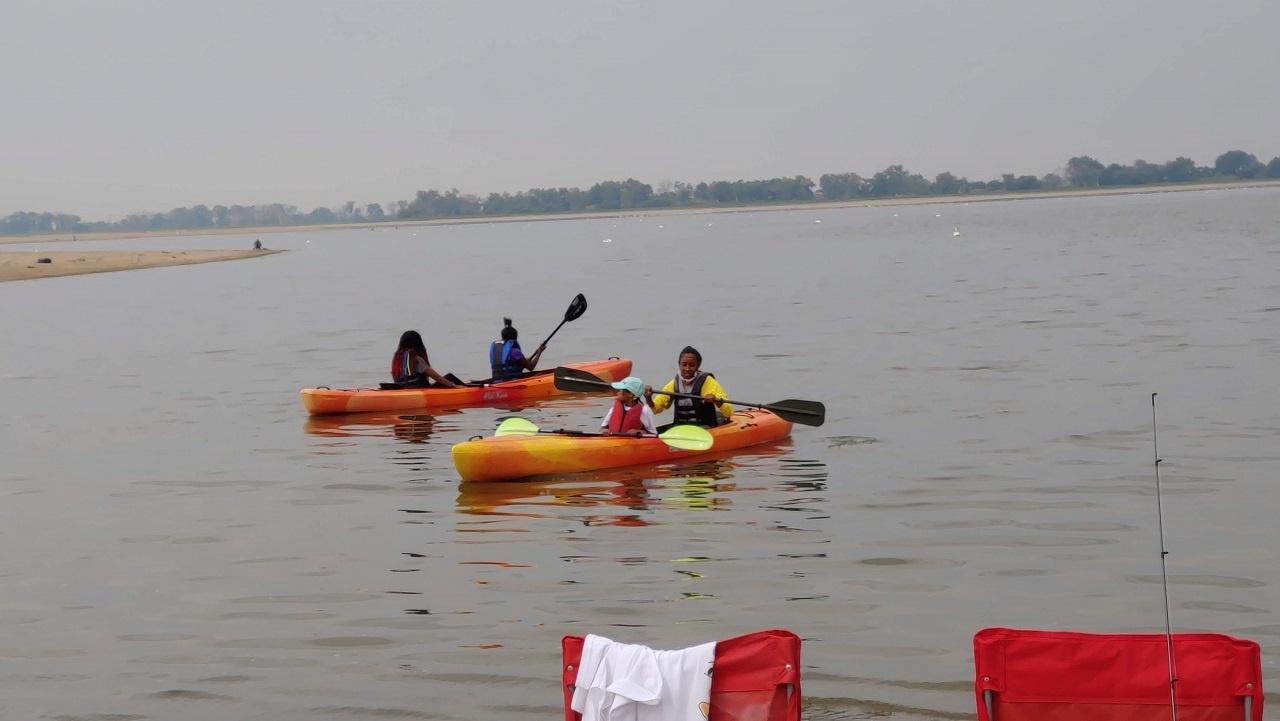 13 / 14
Share This Gallery
Kayaking and canoeing at Barr Lake 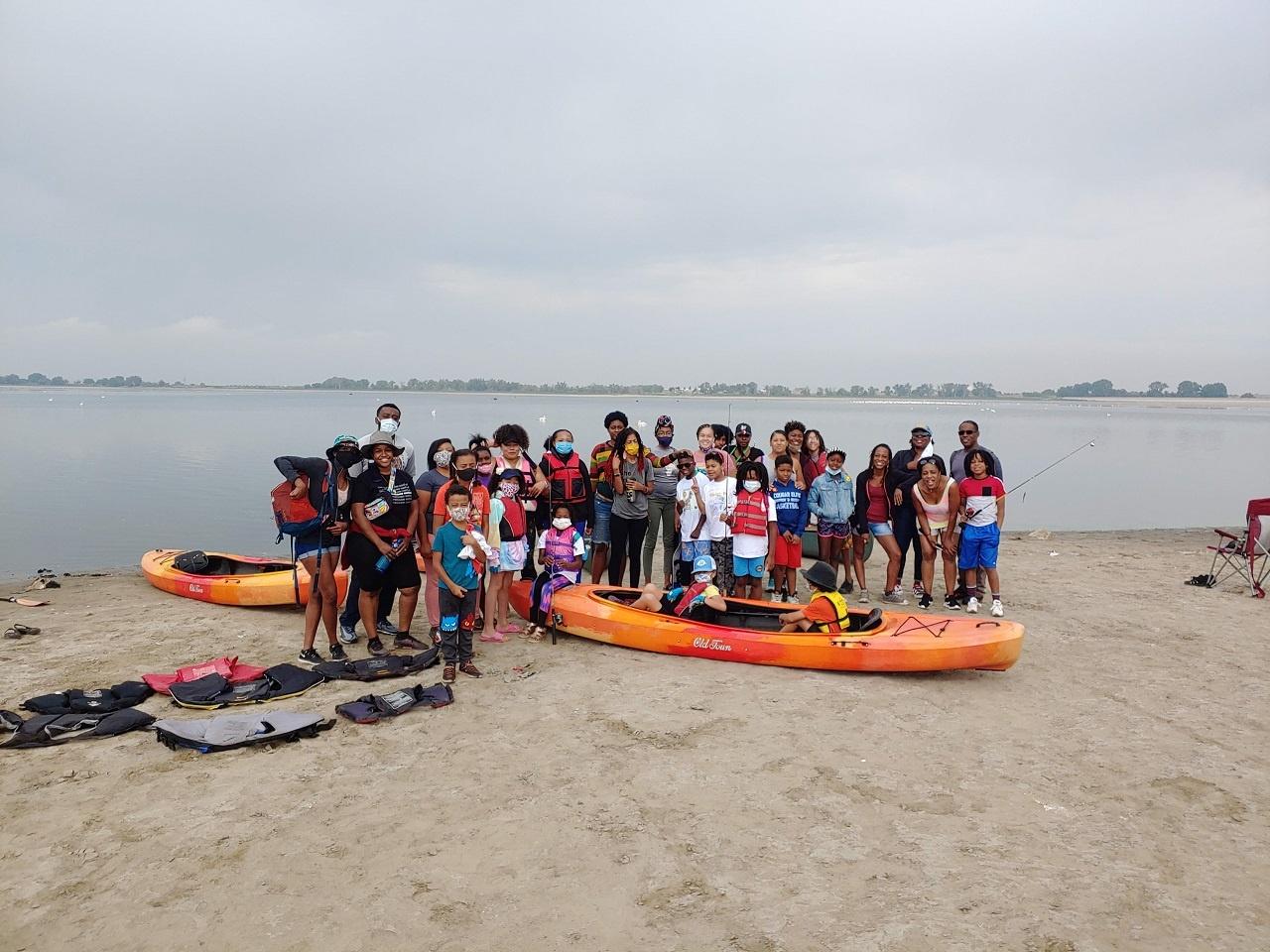 14 / 14
Share This Gallery
Kayaking and canoeing at Barr Lake

To make all of this happen, Damon works with a number of other organizations to ensure they’re reaching families and kids where they are located. She said she often finds Afros and Books and other groups are trying to reach the same people.

“When we started to do book giveaways and especially targeting some of the families that were unhoused, what we found was that a lot of … there's so much intersectionality between … needing support with your literacy and your comprehension and your reading and having this instability around housing and food instability,” said Damon. “So, we really worked to make sure that there's some opportunities for folks to get books who do this work of providing food for families and providing housing support.”

Her passion for books and creating learning spaces for all kids was clear as she walked around the Pauline Robinson Library branch in Denver pointing out some favorites. All examples of expanding representation in stories. She also spoke to Rocky Mountain PBS about the recent, harmful trend of banning books while wearing a shirt on that stated, “Support Freadom.”

[Related: School librarians speak out against recent upsurge in attempts to ban books]

“We look at right now across the United States, there are people who are working hard to get some of these books that are inclusive out of libraries and to limit access,” said Damon. “These librarians are organizing to protect the students' rights, to have collections that show their lived experiences, their lives … and that, you know, is under attack right now across the United States. So this work is even more critical.”

Damon pointed out there are some parts of the country that are so fearful of teaching critical race theory, a way of examining how American racism has shaped public policy, that they are banning entire inclusive book lists.

[Related: The push to ban books in Texas schools spreads to public libraries]

While this is a terrifying reality for her, Damon said in her mind there is a small win when she hears complaints about inclusive books.

Her viewpoints and her work for the community is what led her to receive a special honor this January. Damon was one of three winners of this year’s Reverend Doctor James Peters Humanitarian Award as part of the 31st Annual Dr. Martin Luther King Jr. Holiday Humanitarian Awards Colorado Symphony public benefit concert.

Damon said she first heard she had won the award when she was driving in the car with her daughter. She received a phone call from a number she didn't recognized but decided to answer. On the other end, the caller told her it was not a scam or a prank phone call; it was real. She had won this humanitarian award. And on the call congratulating her was someone she always looked up to – Charleszine "Terry" Nelson.

“When I started working in libraries I was 15 and six months, and she was a librarian down at the central branch library. And I saw her all the time and I thought, 'Wow, I want to be a librarian,'” explained Damon. “And so I said, ‘Oh, it's so special to me that you're on this call Dr. Nelson because you inspired me so much.’”

Nelson responded by telling her that you never know who is watching and recognizing the work you are doing.

Damon admitted with a slight laugh that at the ceremony she got a little emotional. Especially when she said the audience gave a little cheer after her life’s work description was read aloud.

“It was also sweet because after the ceremony, two librarians who recently graduated from the University of Denver stopped me and just said that was so inspiring for them,” said Damon. “This is my joy. I think it's important when we feel like we're walking in our purpose and integrity with what our soul is here to do. And truly this is the work for me.”

My dad grew up during Jim Crow in Texas not allowed into the public library. Two librarians drove the #bookmobile to his rural community. He loved reading! So our home was full of books and he read to me everyday. 📚😊🌟 I dedicate this award to him. #Freadom#LibrariansMatterpic.twitter.com/SxZ0MqxwPe

Damon will continue to do more of her work to make the world better and more inclusive for the next generation. She’s planning another Black to Nature outdoor book giveaway event for the end of the month or beginning of February. This time she hopes to give children and their parents a chance to go horseback-riding and learn about Buffalo Soldiers, African American soldiers in the late 19th century who were responsible for escorting settlers, cattle herds and railroad crews through the West.

All of her work is done with the thought and intention to give children the chance to feel proud and seen.

“I think that representation is so important for students because they contain genius. They contain this powerful purpose for being in the world. And every one of us carries this amazing and powerful potential to transform everything,” said Damon. “So I think for me, it's about unleashing the power and potential of every single child to be a world changer, a game changer.” 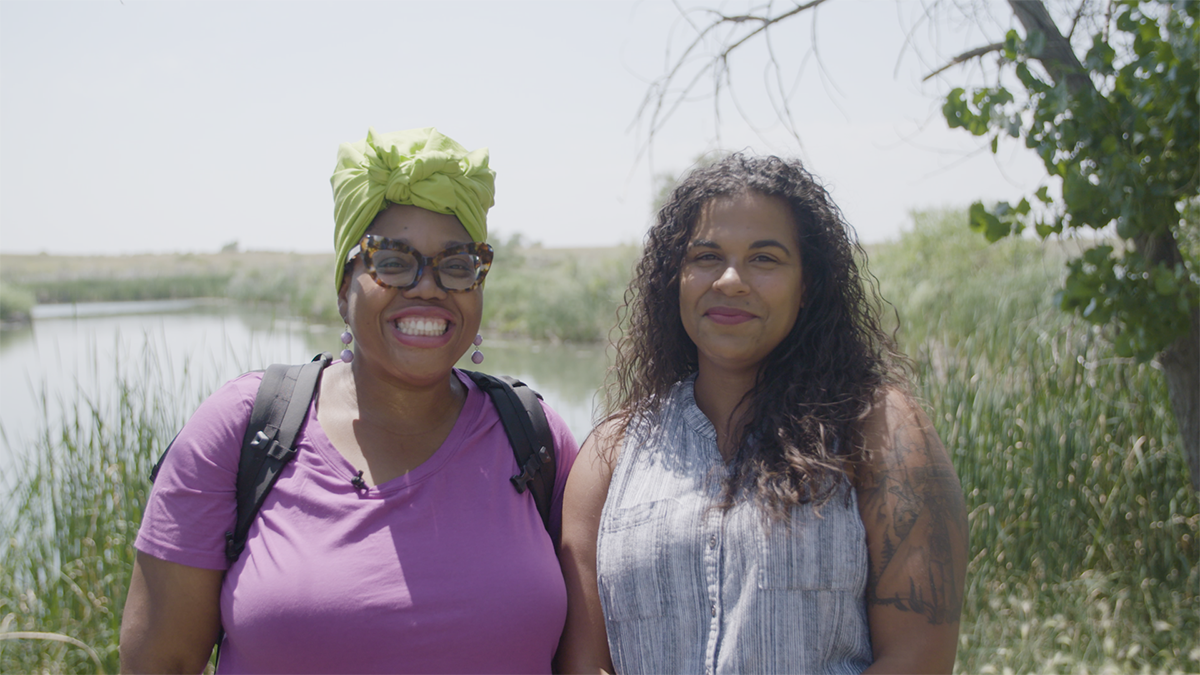 Inspired by the Green Book, these women created an 'Inclusive Guide' to help make businesses safer 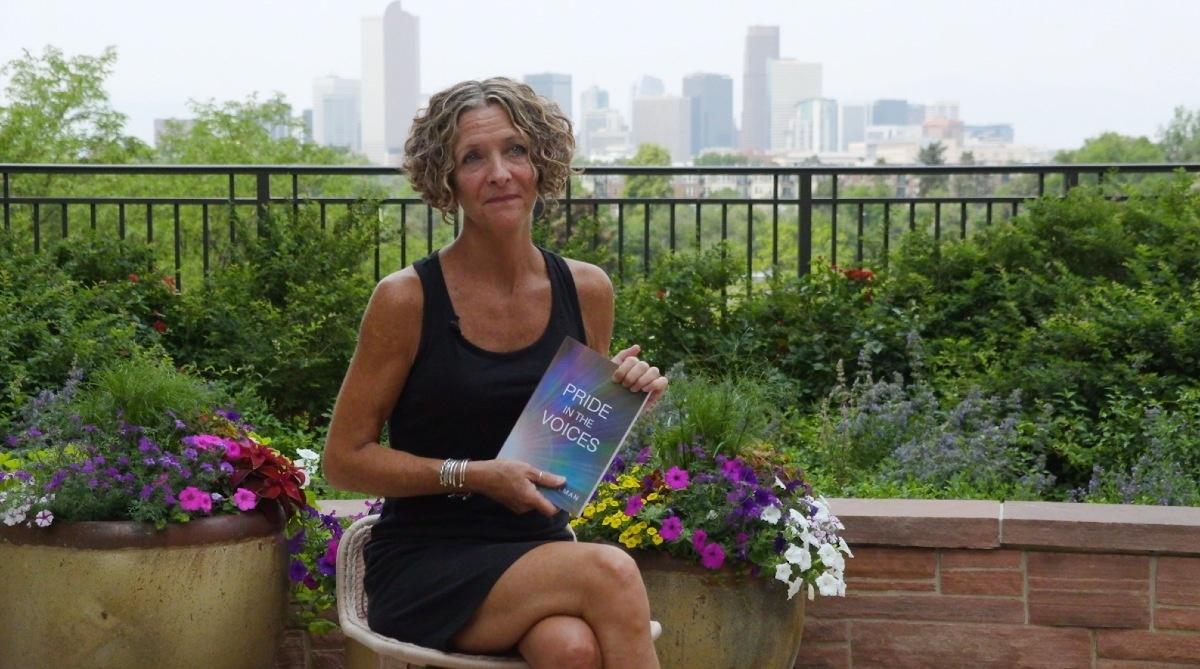 Pride in the Voices: New book compiles over 50 years of LGBTQ+ stories

Heather Spillman published a book, "Pride in the Voices," which tells the stories of nearly 30 LBGTQ+ individuals.