HESPERUS, Colo. — Sitting at the edge of a dry orchard with her head bowed, Ana Henry recalled her grandfather’s experience at an Indian Boarding School, and how his 12-year-old cousin hanged himself in a similar place just decades ago.

“It makes you think about what was going on—what they were subjected to—that would make a 12-year-old kid be that desperate,” she said. “And I think it's a little naïve to think that any other boarding schools were different, even the Old Fort.”

As a student at Fort Lewis College and a member of the Cherokee Nation, this is a history that is present every day for her.

“The boarding school was a structural system that was designed to separate Native people from their culture and from their families,” she explained.

Also known as Indian Residential Schools, these institutions operated from the late 1870s through the mid-20th century. By 1926, over 80% of Native and Indigenous children were attending these boarding schools. The goal was assimilation, or cultural genocide. In many cases, these practices resulted in the deaths of children, a horror that is just now being addressed on a national scale.

Across the U.S., various steps are being taken to do that, although there is still a long way to go. Tribes in Montana recently announced their support of the Truth and Healing Commission on Indian Boarding School Policies in the U.S. Act. It would establish a commission to investigate and document Indian Boarding School policies and then recommend practices for the federal government to acknowledge these atrocities and promote healing.

In October of this year, 20 college students and descendants of Indian Boarding school Survivors received $3,000 scholarships. Individual locations of other boarding schools, like in Genoa, Nebraska, are in the middle of reconciliation projects.

At Fort Lewis College, a council of campus and community advisors will be recommending a course of action to President Tom Stritikus to "better recognize the past, understand more fully how it’s lived today, and look to the future with more intention around these depictions."

Dr. Majel Boxer, Chair and Associate Professor of Native American and Indigenous Studies at Fort Lewis College and an enrolled member of the Assinibione and Sioux Tribes of Montana, has been working to uncover details on the Fort Lewis Indian Boarding School. While the historical records are sparse, so far, she has found that several dozen children perished while attending the school.

“The college has been, this past two academic years…really in just the initial process of acknowledging even its own history as an Indian Boarding School,” Boxer said.

As a first step in this process, Fort Lewis College removed harmful and inaccurate information panels from its campus during a ceremony in September. The removal was initiated by Dr. Joslynn Lee, an Assistant Professor of Chemistry at Fort Lewis College and an enrolled Pueblo of Laguna, who couldn’t believe the panels were still displayed after seeing them as an undergraduate at the college years ago.

Because of the tenacity of Lee and others, the panels now rest in white boxes, respectfully dressed in orange ribbon, in the Center of Southwest Studies. The hope is that they are used to cultivate meaningful dialogue around the subject of Indian Boarding Schools.

While there is much more reconciliation work to come, some hope the very land that once hosted such deprivation might provide the opportunity for healing.

Elicia Whittlesey, the Farmer Training Program Coordinator at the Old Fort, is a hopeful:

“We are always asking the question, 'How can what we do here be informed by this history in the most positive way possible…kind of in a way that goes against everything the boarding school and the Fort stood for?'”

These 6,000 acres are owned by the Colorado State Land Board but managed by Fort Lewis College. And the college offers a number of educational opportunities and development programs.

[To read more about the history of how Fort Lewis came to manage that landclick here.]

College students can pursue senior seminar projects or academic labs, such as mammalogy labs, on the land. A telescope can be used at night or accessed through a live feed anywhere on campus. And over 100 cows and 300 acres of hay keep staff and students busy year-round.

A large part of the Old Fort’s work lies in its farming programs. Students can start their journey in the farmer-in-training internship, working 150 hours in the summertime. Then, they can grow into a larger, paid role managing up to an acre of vegetables. The journey ends in the incubator program where they can receive low-cost access to land, water, mentorship, and marketing assistance.

Whittlesey thinks this is so crucial to offer because the cost of land is high in the area—and across the country—making farming both hard to break into and to sustain. But she also made it clear that students don’t have to be thinking about a career in farming—they could just be curious.

What is even more crucial is supporting Native American farmers. “And this has been something that we've been able to realize more fully through the Native American Agriculture Fund grant,” explained Whittlesey.

“We're using much of the funding from that grant to support students, to do food-and-farming-related internships so that they not only make minimum wage, but they also receive a housing and food stipend,” she continued.

The funds are also available to Native American incubator farmers who want to farm on the land.

Ana Henry was one student that was accepted to the farmer-in-training program and was financially supported through the Native American Agriculture Fund grant.

“I was out here with a team of four other young farmers learning how to sustainably grow my own food. My experience out here was awesome…just having my hands in the dirt every single day,” she said.

Four days of the week the team was out planting and maintaining a variety of vegetables, from potatoes to squash to peas. They worked pesticide-free, used polyculture or companion crop methods, and only used machinery when necessary—a very sustainable approach.

Today, techniques are dressed in adjectives like “sustainable” and “regenerative,” and masquerade as new agriculture developments. However, many were developed and used by Native and Indigenous people for hundreds of years—and still are. Their mystery to the general public today is a product of forced assimilation.

“Knowing that agriculture was used as a tool of assimilation during the boarding school era, it feels necessary to continue incorporating Traditional Knowledge,” she said. “And so at the beginning of our farmer training programs, we acknowledge the way agriculture was used and we acknowledged that there are many ways of doing farming and that we are mostly teaching one specific way.”

“The Three Sisters, it's a farming method that's really common in most North American Native cultures. The three sisters [are] corn, beans and squash,” she explained.

Henry said: “I'm not Navajo, so I can't speak to the ceremonial uses to it, but it definitely is a sacred plant… [Brandon] told us that when we plant corn we're also creating a pact with the earth and the land…you're just making a promise to that relationship between you and the crop, to water it, to weed it, to make sure it grows big and strong, so that you can eat it. And then the cycle continues.”

Henry thinks reinstating these traditional practices is a first step in the healing process.

“And I think we just need to continue doing that and just listening to Native voices that haven’t been heard for so long,” she added.

And Whittlesey is positioned to listen and respond.

“How can we be informed by the history of this land?” she asked. “I don't think I'm the one to answer [that]. And it feels like this exciting way of opening up the future over and over again to say, what's next and how can this be more beautiful and more in-service to everybody?”

At the season’s end, Henry and her fellow workers asked Whittlesey where their food would go. Henry recalled that Whittlesey responded by asking them where they wanted it to go. The team decided they would donate it all to the Native American Center at Fort Lewis College.

“And I think that’s what reconciliation means to me,” said Henry.

She still finds it difficult to talk about the Indian Boarding School, but knows it is important to do so. In the end, she hopes the legacy of the Old Fort will be about the farmers.

“We can’t change the history here but what we can do is we can move past it, and we can heal. I think that’s what we’re doing here, is through sustainable agriculture we’re healing the land and we’re also healing the people, especially Native students that are working here as well,” she explained.

For her, this healing process was also deeply personal.

While her grandfather lost much of his culture and language, some of the few words he remembered in Cherokee were food words. She remembers he loved food and the healing it could bring people. At the end of her time, she asked her mother if he would be proud of her.

“She said yes,” Henry declared, as a palette of sunset golds softened the orchard trees, dry corn stalks and dusty sagebrush around her.

In six months, another planting season will begin. And the work continues.

The story is part of an episode of Colorado Voices: An Indian Boarding School. It aired Thursday, November 18 at 7 p.m. on Rocky Mountain PBS and can be streamed here. 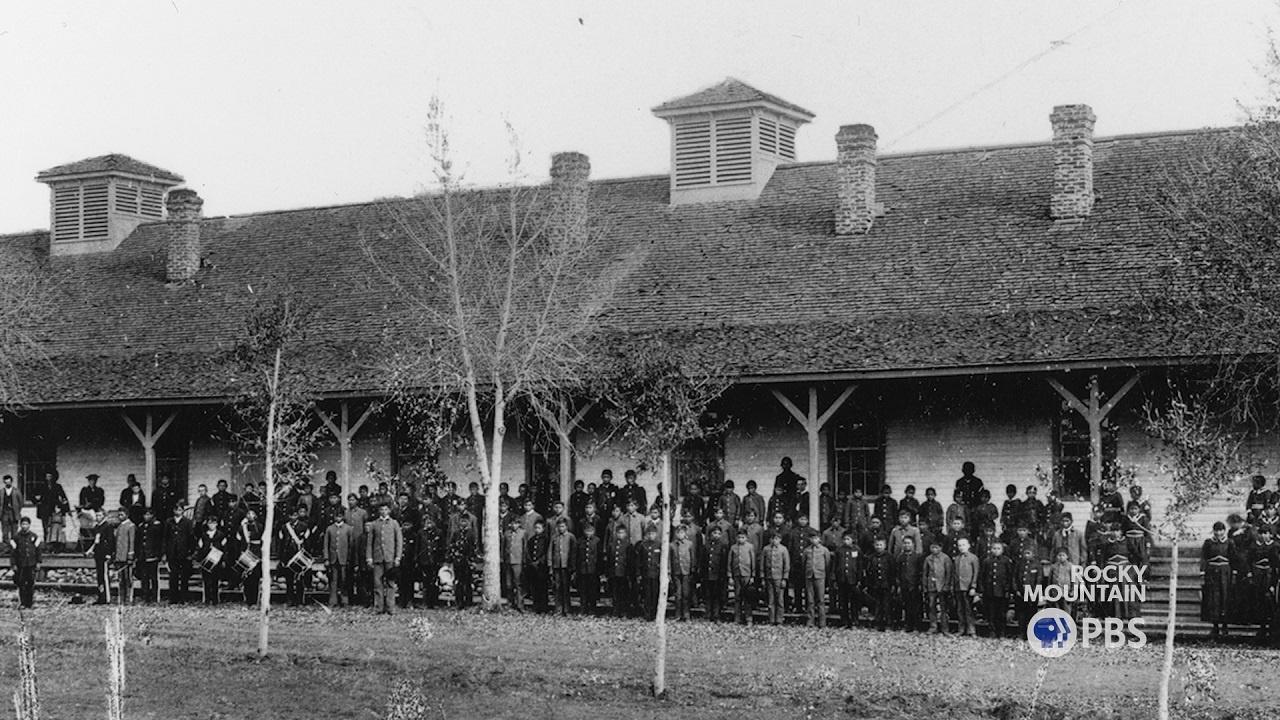 Rocky Mountain PBS takes viewers inside the experience of faculty members and students today as the Fort Lewis College's past comes into full light. 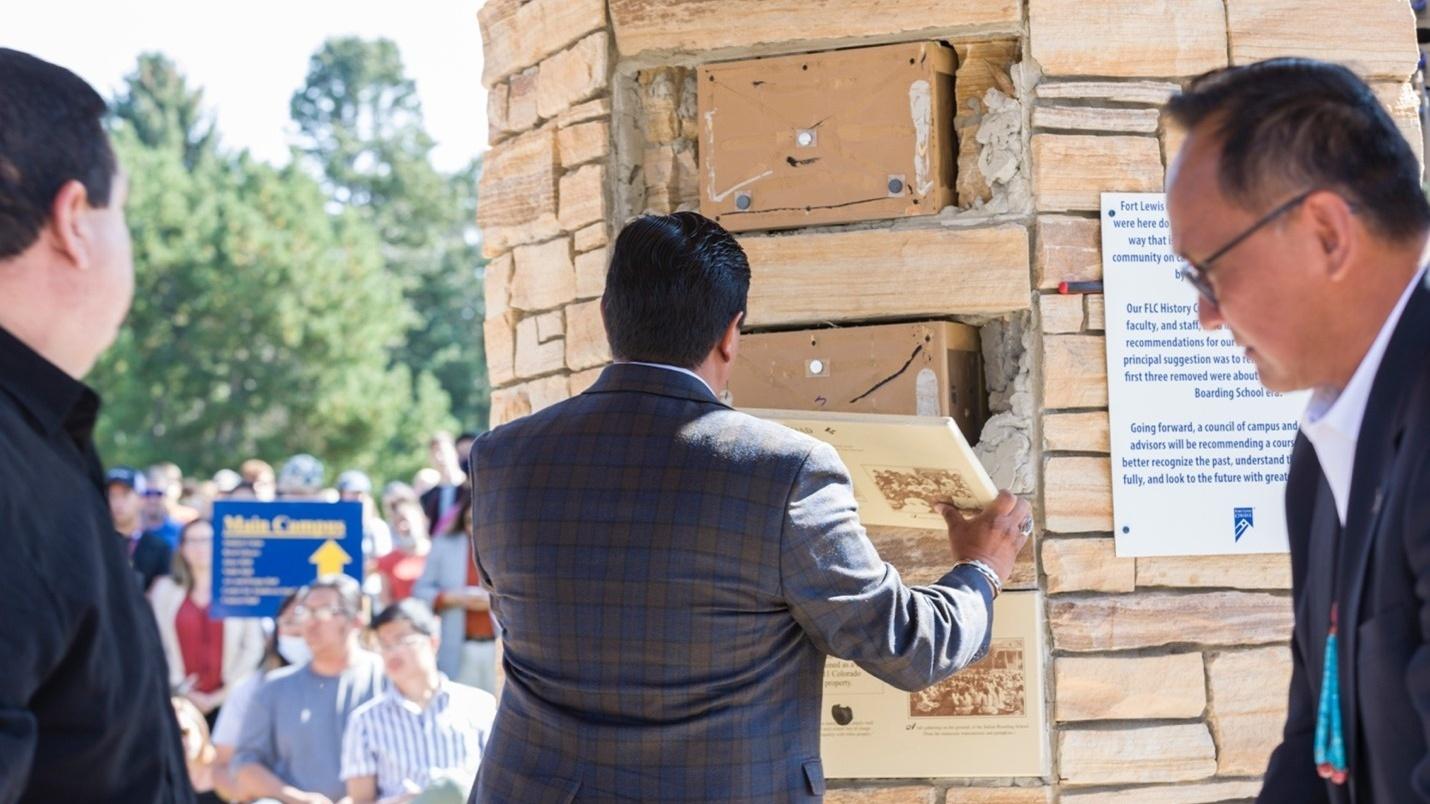 Trailer | Home From School: The Children of Carlisle

Native Americans recover the remains of children who died at an Indian boarding school.