Heartbeat Jazz: Music has the power to heal

by
Mitch Jelniker and Jennifer Castor
• Published on May 17, 2020 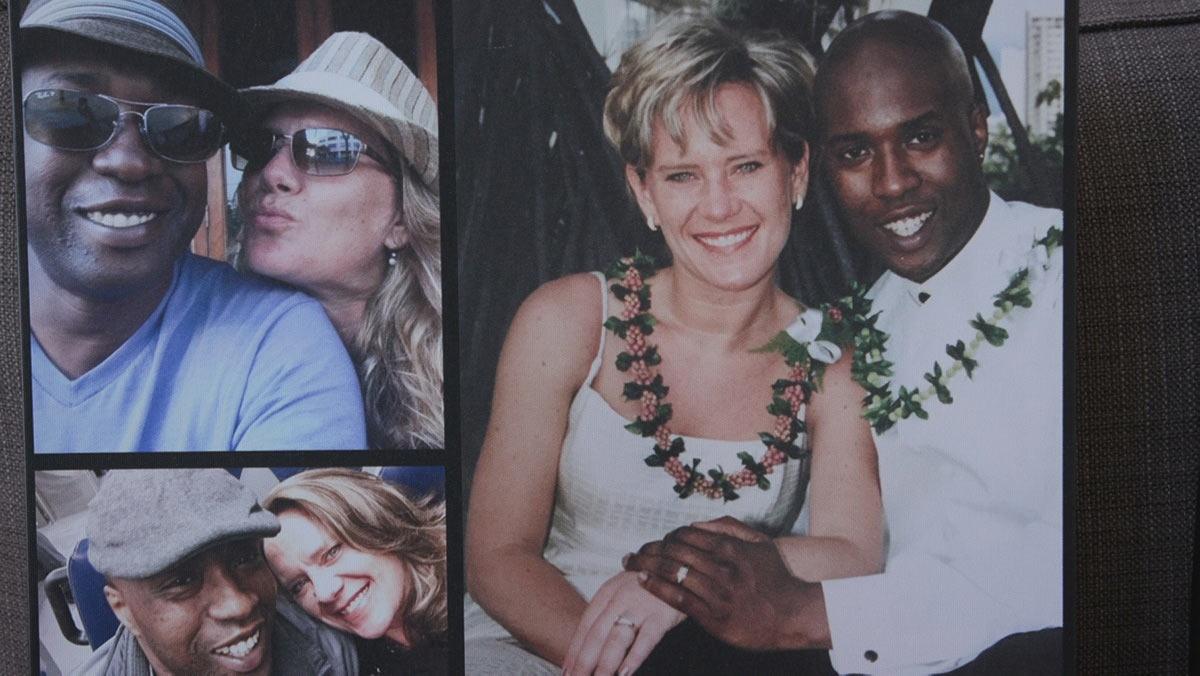 There is no mistaking the power of music. It connects us to life, dreams, and each other.

And it often touches our hearts. But this is a story of how the heart itself influences the music.

For Penny Hamilton, hearing just a few bars of one particular song marks the beginning of a love story with a man named Rhone. Their song is called Moody’s Mood for Love.

A couple's love lives on through song.

“If life was harder or we got too busy, Rhone would find the song and play it and it makes you stop and slow dance or slowdown,” said Hamilton.

Penny met Rhone surrounded by music at a jazz club.

“I was sitting at a table and Rhone just came up to me and asked my name, so I told him. He said: ‘Penny for your thoughts, nickel for your kiss, dime if you tell me if you love me.’ At the time I was like, you’re a bit much for me, what is that? I didn’t know it was a song,” said Hamilton.

It would be the first of many songs that would connect Rhone and Penny in both good times and in bad. When they began to date, Rhone gave Penny a cassette tape full of music.

“There was quite a variety of music on there. Everything from Mary K. Blige ‘Sweet Thing’ to the King Pleasure James ‘Moody’s Mood for Love.’ It was all on there. It was probably the first time I heard that song,” said Hamilton.

Moody’s Mood for Love is an old song, but Rhone was an old soul. A romantic at heart, who had a special saying to help face life’s challenges.

“He would say: ‘The man with a plan always has a chance.’ Like, think about what you want to do and then go make it happen,” explained Hamilton.

Part of Rhone’s plan was to marry Penny. And together they would have a son, named Roman.

“Rhone taught Roman how to golf. Which is now Roman’s sport that he’s most passionate about. He’s also a basketball player – Rhone taught him,” said Hamilton.

Life for the Hamilton’s was full. Rhone was operating aerial cameras for the NFL, Penny was thriving in her career, and young Roman was excelling in school and sports. And of course, there was plenty of music involved in their lives.

“Every morning before school, Rhone would have some sort of song playing and that would set the pulse for the day or he’d be dancing around, or we’d have a Stevie Ray Vaughan on,” said Hamilton with a smile.

Rhone made life fun. Every day was filled with hope, love, and music. But when Rhone turned 40, the music threatened to stop when he had a stroke.

“That was sudden. He had a stroke on a plane to California. His crew was there and met him at the hospital. And the next day I was out there. The hospital did what they call light therapy on his head. Apparently to stimulate the nerves to get them talking to the brain again. And during this session all the lights were down and we’re all in the room and they were doing light therapy and Rhone started singing, ‘there I go there I go, there I go,’ and I joined him,” said Hamilton.

Those are the opening lines of Moody’s Mood for Love, Penny & Rhone’s special song. The treatment and the music worked. Soon Rhone was back to dancing, singing, and working, with a healthier diet and some medication. But he did not like the medication.

“Statins, I have never been on Statins. I heard people don’t like them, but he decided with his new lifestyle and healthy way of living was all he needed,” said Hamilton.

Healthy eating and exercise were top of mind for Rhone. And for eight years it seemed to work, everything was fine.

“And then he had a second stroke that was even more devastatingly massive,” said Hamilton.

Once again, Rhone and Penny turned to music to help heal. They met with therapists at the University of Colorado Hospital who use art to help families cope with illnesses.

“Our goals in this group are to create a space for people to express emotionally and through themselves a little bit of insight into what brings them comfort and creative meaning in their life, and we do that through music and art,” said Angela Wibben, UCHealth Board Certified Music Therapist.

“Oftentimes there aren’t words to express what a patient is going through when they’re diagnosed with a serious illness and through the arts, they’re able to say things that words can’t hold and that could be through an image, it could be through a song,” added Amy Jones, Art Therapist & Licensed Professional Counselor.

Rhone’s special song choice was Moody’s Mood for Love. But the second stroke was just too much for Rhone to endure. After a brief, and brave fight he passed away. In his final days, the Palliative Care team at UCHealth did something extraordinary. They asked to record Rhone’s heartbeat before he passed so they could put the sound to the music.

“I picked the song ‘Mood for Love’ and I still wasn’t quite sure grasping what was going to happen and they said they were going to put Rhone’s heartbeat to the song,” said Hamilton.

“Just hearing the heartbeat to me was amazing. Then they reached out to me and said they were going to collaborate with RMPBS and found live musicians to record the song,” said Hamilton.

Musicians who had never met Rhone, gathered at Rocky Mountain Public Media’s KUVO Jazz studios to record Penny & Rhone’s special song: Moody’s Mood for Love. In addition to the instruments, the sound of Rhone’s heartbeat was mixed through the audio board to help lead the musicians.

“It’s such an honor to get to play and perform music with such a purpose I think the point of art and the point of what we do is to serve people and to help improve people’s lives to tell a story,” said Saxophone player Rico Jones.

“It was very interesting because as you could imagine the heartbeat isn’t perfect as far as metronomically perfect. So, there is an ebb and flow to it but actually, I think that maybe gives the music kind of a cool organic feeling,” said Drummer Kevin Matthews.

The musicians had to alter the arrangement to match the rhythm of Rhone’s heartbeat, and perform with Penny sitting right there in the studio.

“It was inspiring to be playing honestly. It felt like something we had to play up to, you know, because of what she was going through was definitely more intense and heartbreaking than what we were going through,” said Bass player Hunter Roberts.

“The thought of it was cool and wholesome and it’s nice to be able to use this thing I get to do for myself and that often feels very selfish for a different purpose to serve someone else,” said Piano player Jack Dunn.

Penny asked them if they ever heard of Moody’s Mood for love.

“And the answers were ‘No.’ And within five minutes they all dabbled a little bit and the next thing you know it’s just this beautiful song,” said Hamilton.

There’s a line in Moody’s Mood for Love that goes: “Come and put our two hearts together, when we are one, I am not afraid.” It is the soundtrack of Penny and Rhone’s life together.

Though Rhone has been gone for a couple of years now, Penny still enjoys playing the song from time to time.

“I took some video on my phone when I was there in the studio and so I watch the video piece again because it’s not just the song from that day, it was working with all of those wonderful people that made it happen. And by watching the video I feel like Rhone was there and not just me dancing. Now I hear it and I can dance to it again, with the warmth of Rhone around me. And it makes me smile,” said Hamilton.

Penny has another way to keep Rhone close to her heart. She had this necklace made with help from Amy and Angela, the UCHealth art therapists. The lines you see are of the electrical impulses, or the signature, of Rhone’s heartbeat. Just like their special song, it is art influenced by love.