Día de los Muertos: a celebration of life in a time of loss

Editor's note: The videos in this story were originally produced and published in the fall of 2020. The article has been updated.

DENVER — Monday, November 1 is the beginning of Día de los Muertos. Meaning “Day of the Dead” in English, Día de los Muertos is a celebration of life and death that dates back thousands of years to the Indigenous tribes of what is now Mexico. Families gather to pray for and remember their loved ones who have passed away.

“Día de los Muertos has its roots in Pre-Columbian cultures and beliefs,” Isabel Dobrin wrote for NPR. “Before the Spanish arrived in what is today Mexico, the Aztec gave offerings to their deceased ancestors as part of their death rituals. After the Spanish came, the celebration morphed to incorporate Catholic beliefs and practices, creating this deeply religious, syncretic tradition.”

Día de los Muertos is celebrated on November 1 and November 2. These days are known as All Saints' Day and All Souls' Day, respectively.

Though predominantly celebrated in Mexico, a growing number of people of Mexican and Latin American descent are celebrating in the United States.

Día de los Muertos is a holiday steeped in tradition. One of the most recognizable symbols of the multi-day celebration is face paintings of calaveras, or skulls.

“I like painting calaveras because it’s part of a tradition. It’s a beautiful form of art that actually brings the spirit to life,” said Atisha Pisaña, a makeup artist. “It’s something to represent our ancestors.”

Pisaña said she never expected she would be making a living like this. “I love art. But I never thought I would be painting on faces,” she said. “I’m so used to doing it with acrylic, used to pencil. But never did I ever think this is what I would be doing for a living.”

Halloween this year marks the eight year anniversary of when Pisaña started painting calaveras. Pisaña says she feels her grandmother’s presence when painting the calaveras, especially the ones that include orange accents. “She had a little thing for orange like orange lipsticks,” Pisaña explained.

During the interview, Pisaña was wearing a pin on her shirt with pictures of her grandmother and grandfather. “They’ve been there since day one,” she said.

“It’s been a hard one. And so I like wearing them,” Pisaña said of the pins, “because it feels like they’re here with me and it’s a piece of them.”

“I want people to realize that Día de los Muertos is a celebration of life,” said Angélica Jiménez, who had her face painted by Pisaña. “It is not scary, it’s not spooky, it’s not a costume—it’s more than that.”

The symbolism of the holiday is represented even in the small details of the face paint. The yellowish orange represents marigold flowers, also known as “flowers of the dead.” Their scent is believed to attract souls of the deceased to the celebration. Pisaña’s work also frequently includes Monarch butterflies, which flock to Mexico by the hundreds of millions in the winter. Many believe these butterflies represent the spirits of the dead.

“Don’t be afraid to learn about other cultures and to see how other people in the world celebrate and honor their loved ones who have passed,” Jiménez said. “There is still so much to learn.”

Another integral part of Día de los Muertos is ofrendas, elaborate homemade altars that honor a loved one who has passed away. The altars are often decorated with flowers, photographs, and even the favorite foods of the deceased.

In Denver, The Center on Colfax displayed altars for Día de los Muertos last year. The Center is an LGBTQ community center, the largest of its kind in the Rocky Mountain region, according to their website. Their altars also honored supporters of the Black Lives Matter movement and the transgender community who have died from acts of violence.

Day of the Dead Altars

The Center on Colfax Day of the Dead celebration.

“Especially in times like this with COVID, people have felt that isolation, loneliness,” Mireles said. “But yet here they are celebrating Día de los Muertos with their loved ones, and really making it celebratory.” 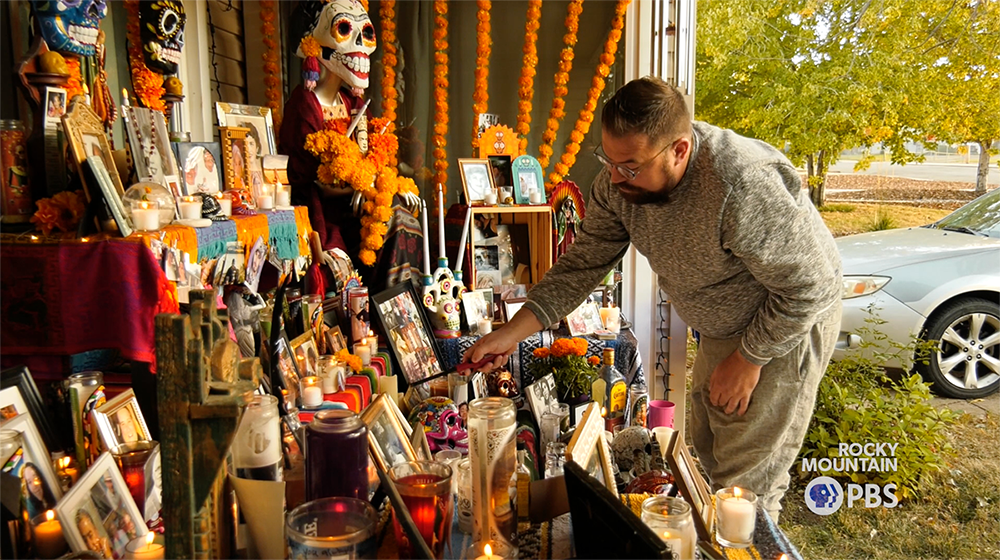 Community-based ‘ofrenda’ offers space for people to honor the dead

Instead of typical Halloween decorations, Denver local Christopher Jorgenson had something else in mind this October. He and his partner, Paul, constructed a community-oriented ofrenda, or home altar, to help people honor loved ones who have passed away.