Update: The Occupational Safety and Health Administration’s (OSHA) investigation into Juan Panzo Temoxtle’s death found that Shelton Land and Cattle, a dairy farm in LaSalle, “failed to protect its workers from drowning and chemical hazards.”

Temoxtle drowned in a manure pit on March 30 of this year while training for his new job at the dairy. In its findings, OSHA said the dairy “did not ensure that the pit had adequate guarding or curbing to prevent the truck from falling into the manure pit while moving it into position on the push-off platform.”

“Manure pits are known hazards in dairy farming operations,” said OSHA Denver Area Director Amanda Kupper in a news release. “If required guarding had been installed, this worker’s life could have been spared.”

The OSHA investigation determined that Shelton Land and Cattle “failed to implement measures to protect employees from drowning or crushing hazards, did not have a hazard communication program, and failed to train workers on hazardous chemicals in the workplace.”

"We took into consideration the fact that there were struggles opening the [truck's] door," Kupper told Rocky Mountain PBS in an interview. "However, if the pit would've been adequately guarded, the individual would not have been able to drive into the pit. So being able to open the door would’ve been an irrelevant point.”

The company faces up to $24,575 in fines, according to OSHA. The dairy has 15 business days from the time they received the citations, which you can read here, to comply, contest the findings or request a conference with OSHA officials. Rocky Mountain PBS reached out to Shelton Land and Cattle for comment but has not heard back.

Temoxtle's brother, Alfedo Panzo Temoxtle, said it felt bad knowing there was someone to blame. "If someone is guilty, there needs to be justice," he said in Spanish.

Attorney Britton J. Morrell, who represents the family, said, "We are still waiting for the final report to see if there was any design or manufacturing defect or flaw.  If so the family will consider their legal options.  Since the injury is covered under workers compensation there is no other further remedy to be pursued against the employer."

You can read our original story on Temoxtle’s death below.

LASALLE, Colo. — Juan Panzo Temoxtle’s family says he went to work every day with a goal in mind: to build his family a new home.

A father of three young children, Temoxtle left his family behind in Mexico and headed to the United States to work. He had nearly saved up enough money to return home, his family says, when he met an unexpected and unthinkable end: he drowned in a manure pit while training on a new job at a LaSalle dairy.

Temoxtle’s death in March became a rallying cry for advocates who lobbied successfully for a farmworkers’ bill of rights in Colorado.

But investigators are still working to find out what caused the accident that claimed the life of Juan Panzo Temoxtle.

It is the kind of accident federal occupational safety investigators have encountered several times before on dairies across the country.

Juan Panzo Temoxtle died after an accident at a Colorado dairy, mobilizing calls for change.

It was early the morning of March 30, 2021 when a dispatcher received a 911 call from Shelton Land and Cattle.

Sounding shaken, the dairy’s owner, Jason Shelton, told the dispatcher one of his employees needed help. He said the employee was stuck inside a piece of equipment that was submerged in a manure pit.

When a Weld County Sheriff’s deputy arrived on scene, Temoxtle had been freed from the equipment he had been driving, a manure vacuum, and was receiving CPR. Employees had attached chains to the vacuum and used excavators to pull the vacuum partially from the 12-foot deep pit, according to the deputy’s report.

Weld County Sheriff's Office body camera video shows employee Taylor Cross tell first responders he was working nearby when the vacuum went into the pit and the cab became “completely submerged.” He said another worker, identified in the incident report as Cristino Sanchez, was on the front of the equipment training the driver, Temoxtle, when the crash happened.

“He jumped off the side of it as it came over the edge. And then I jumped in to try to pull this guy out of the cab,” Cross said on the scene.

Cross wrote in a witness statement that he and Sanchez tried to open the door to free Temoxtle but couldn’t due to the water pressure. Cross also wrote that before the crash he heard the manure vacuum bump a curb, and heard Sanchez say something to the driver. He said he turned and saw the vacuum back up, approach the curb again “at a higher rate of speed,” then break through the "emergency stop" and go into the pit. 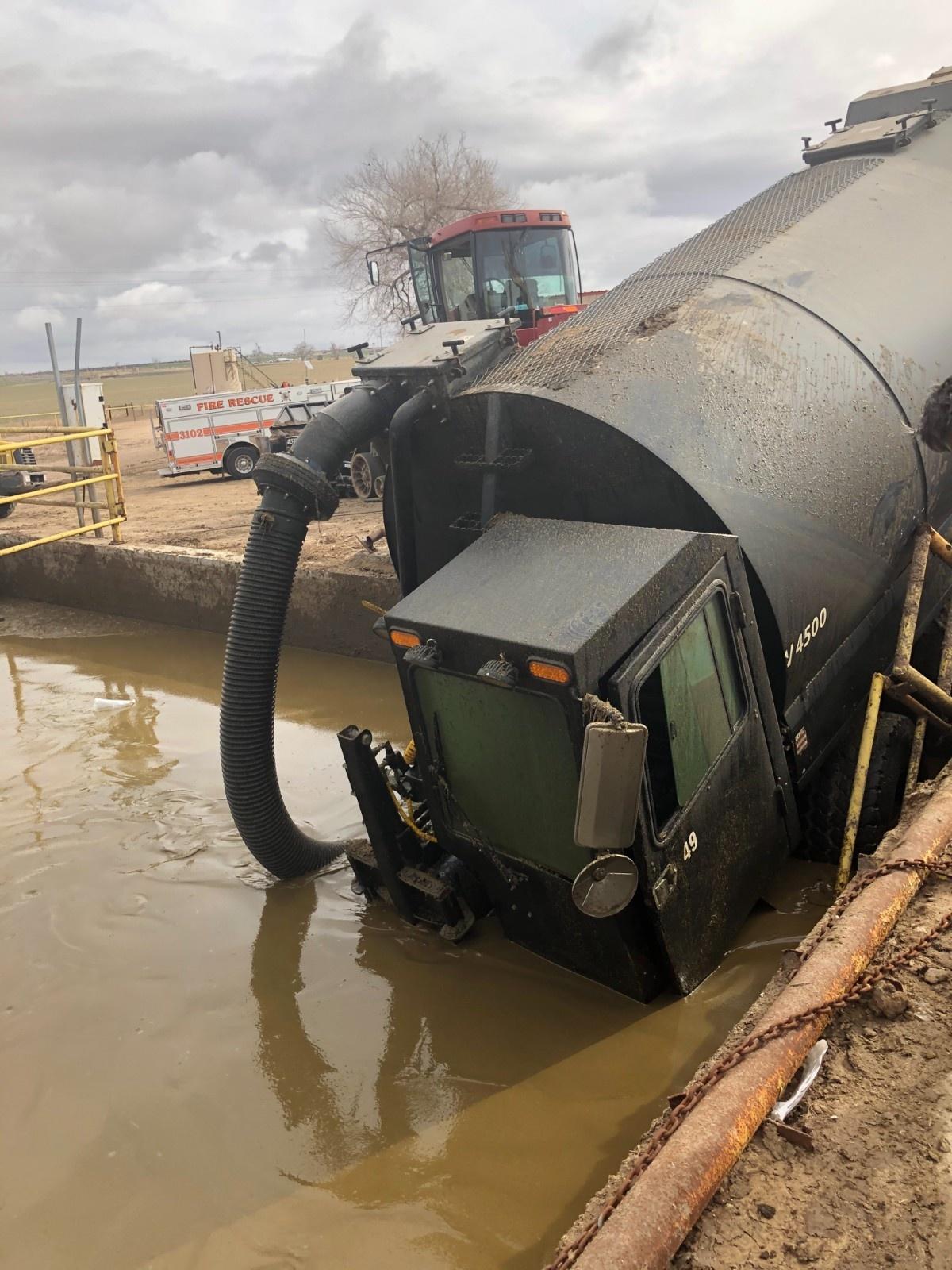 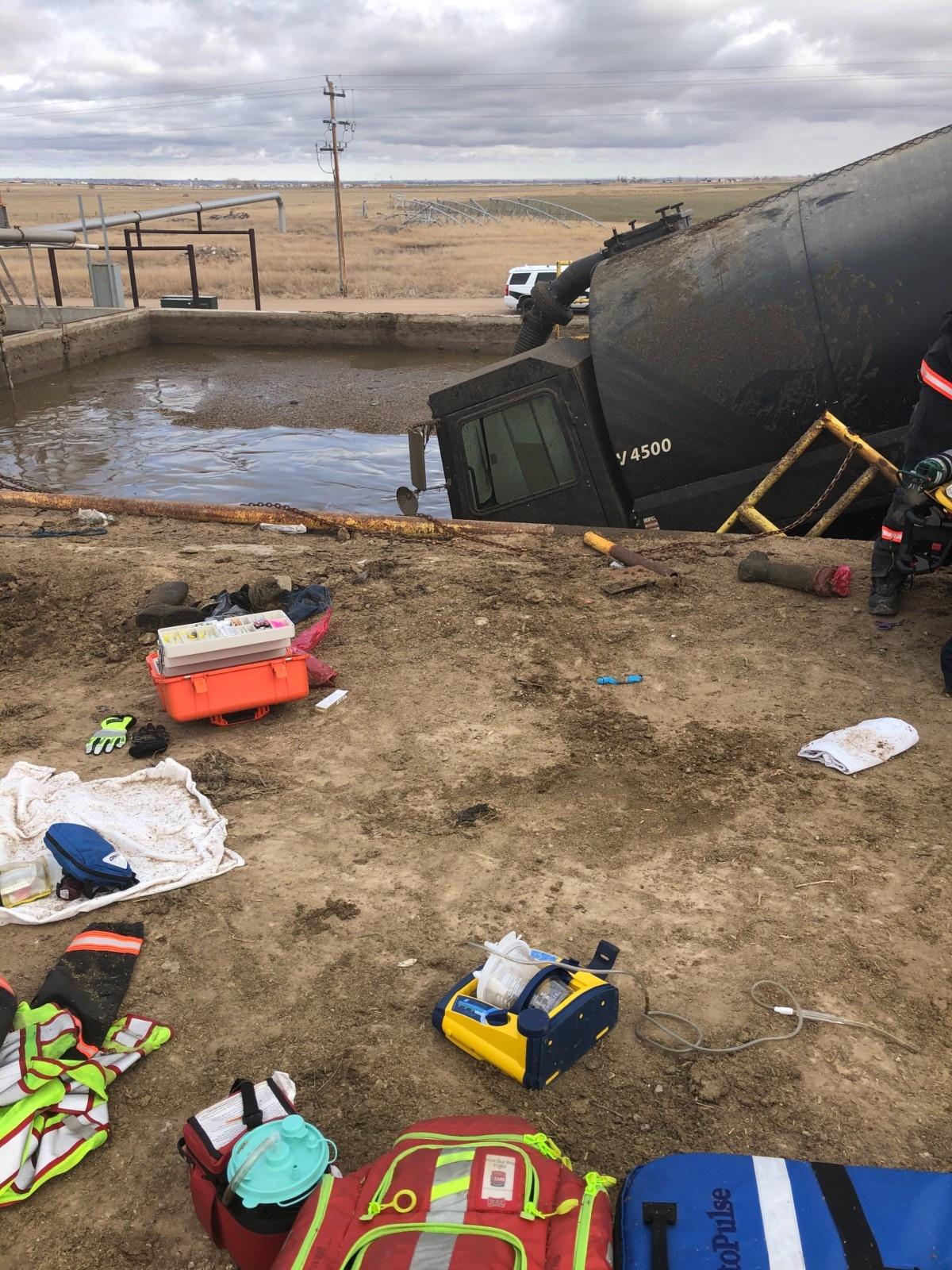 ABOVE: Photos of the accident scene from the Weld County Sheriff's Office

The sheriff’s incident report says there was no gate or fence around the pit. Photos from the scene obtained by Rocky Mountain PBS from the sheriff’s office do appear to show some type of yellow barricade wedged next to the equipment in the manure pit, potentially damaged in the accident. While Shelton Land and Cattle representatives declined interview requests from Rocky Mountain PBS, citing the ongoing investigation, the company said in a statement that physical barriers were in place at the time of the incident.

The sheriff’s office closed its case, writing that the incident appeared to be “purely an accident.”

Federal investigators at the Occupational Safety and Health Administration (OSHA) opened an investigation the day of the incident. That investigation is still ongoing.

Records reviewed by Rocky Mountain PBS show the agency has investigated at least 10 similar fatalities at dairies across the country, dating back to 1997. In each incident, work equipment or a vehicle ended up in a liquid manure pit, leaving the worker unable to escape.

Yet OSHA said it does not have specific regulations aimed at preventing this particular type of accident, such as requirements for physical barriers around manure pits or required safety training for employees working around the hazardous manure liquids.

Temoxtle had only been working at Shelton for six weeks before he died, and his family told Rocky Mountain PBS he had little experience with manure vacuums.

“If that existed, I think he wouldn’t have died,” said Quiahua, who said he has worked on five dairies in the past.

OSHA had not inspected Shelton in the five years prior to the incident. Such inspections are typically only prompted by fatalities, serious injuries, or complaints.

Advocates for farmworker health say the lack of specific workplace safety regulation in the agriculture industry means it is up to individual farm and dairy operators to research and implement safety controls.

“Farmers aren't necessarily workplace health and safety experts,” said Bethany Alcauter of the National Center for Farmworker Health. “There is sometimes this disconnect, I think, between the resources needed both mentally, intellectually and financially to implement everything, and the resources that are actually available for farmers to do it.”

The U.S. dairy industry estimates its economic impact in the hundreds of billions of dollars. But in the ten prior manure pit fatalities reviewed by Rocky Mountain PBS (nine of which resulted in fines being handed down by OSHA) initial fines averaged less than $7,000.

“Employers have a legal general duty to protect the health and safety of their workers. But without the presence of having really specific rules that the employer has to follow, it's really difficult for OSHA to do very much,” Alcauter said.

“In agriculture, they have really some of the highest workplace fatality rates and workplace injury rates, compared to any other industry in the United States,” she said.

‘Agriculture cannot function without these workers’

Advocates for farm workers put out word to the public about Juan Panzo Temoxtle’s death shortly after it happened in March.

They wanted to raise money for his funeral. And they also wanted lawmakers to pay attention.

In a news release, the organization Project Protect Food Systems said Temoxtle’s death was exactly what a piece of state legislation called Agricultural Workers’ Rights was designed to prevent.

“This is another tragic loss of life that could have been prevented. We do not do this work to see farmworkers die, and this has been devastating to us as advocates and as a community. We need to guarantee protections for workers,” an advocate wrote.

Lawmakers listened. They debated whether anything in the legislation specifically addressed prevention of incidents like what happened to Temoxtle, and whether the new provisions would impact some farmers' ability to stay in business.

Ultimately, the bill passed and Governor Jared Polis signed it into law in June. Among the protections provided, sponsors said it gives workers the right to unionize, take water breaks during hot summer days, report safety concerns without fear of retaliation, and potentially earn overtime pay.

“It’s an important first step in acknowledging that agriculture cannot function without these workers,” said state Rep. Yadira Caraveo, a Democrat who co-sponsored the new law. “It’s not just about who owns the farm, it’s about who works the farm.”

‘We need someone to help them’

“The whole family was crying when we heard the news,” Juan’s brother Alfredo Panzo Temoxtle told Rocky Mountain PBS in Spanish. “It wasn’t a normal death. If he would’ve been sick, it would’ve been a different story. But suddenly like this… really hurt us.”

“He had a family and little kids,” Alfredo said. “We need someone to help them.”

In a statement, Shelton Land and Cattle’s management team said it has been working with advocates to help Juan’s family.

“We cannot adequately express the deep sadness we feel over the accident that involved one of our employees. Our sympathy is with their family as we all mourn this loss. We are standing behind the family and extending resources to them,” the statement said.

Juan’s brother Alfredo said his thoughts often turn to the home in Mexico his brother was working so hard to try to build for his family.

“He wanted to build a house,” Alfredo said. “He was fighting for that dream and paying for it.”

This story is one of several featured in this month's Colorado Voices broadcast. It aired Thursday, September 2 on Rocky Mountain PBS.

Brittany Freeman is an executive producer at Rocky Mountain PBS. You can reach her at brittanyfreeman@rmpbs.org.