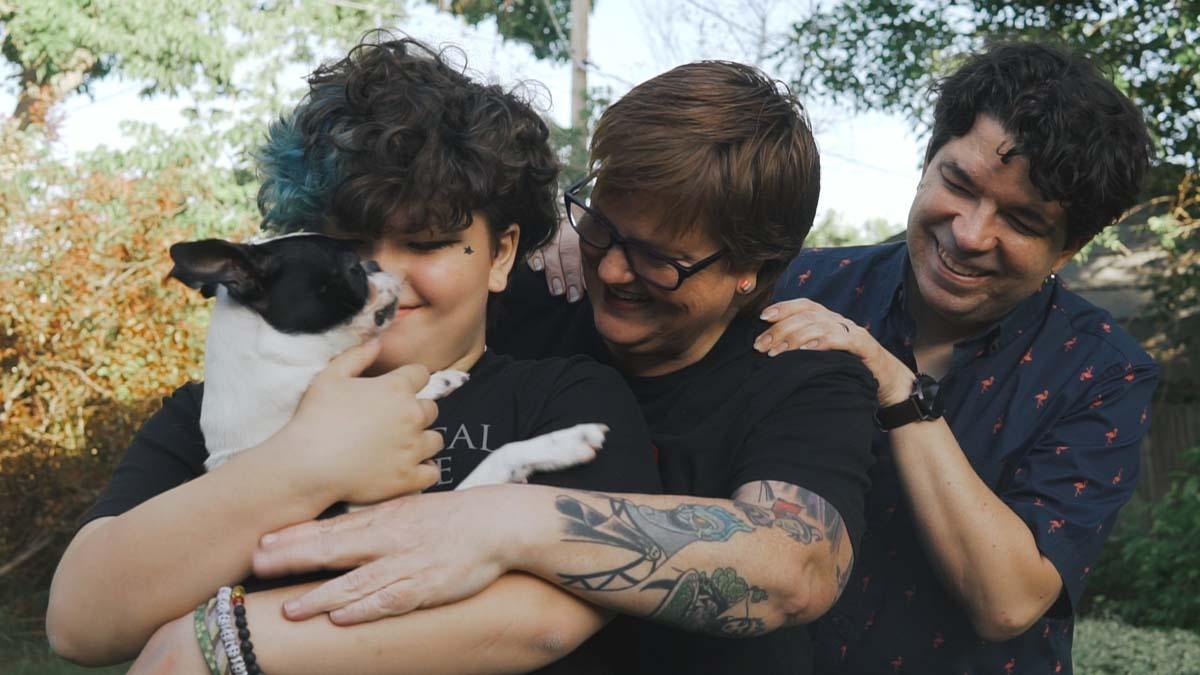 Kendra MacNicol lets out a big sigh. “Not everyone in our family understands. That’s been difficult. Not everyone around understands. It has been hard, but my typical go-to is saying, ‘Well, we’re a modern family.’ We are 2020 craziness, and I think we’re more typical than probably people realize.”

At first glance, the MacNicol family seems to fit into society’s version of “normal”. Kendra and Jeremy are parents to child Ani. Their home in Northglenn has a big backyard, where they play with their new Boston terrier puppy, Ollie. But the vibrant family has found a place in the LGBTQ+ community.

Kendra identifies as pansexual, her pronouns are she/her. Her partner Jeremy is gender fluid, and prefers they/them but also accepts he/him pronouns. Their 14-year-old Ani identifies as bisexual, and non-binary, and has also adopted they/them pronouns.

14-year-old Ani tells their story of self-discovery in the LGBTQ+ community.

“I realized that I was different when I was 10 years old,” says Ani. “I was raised in a household where it was constantly a factor of - there’s women who like women, and men who like men, and people who aren’t women or men.” Ani attributes their open household for why they felt comfortable coming out so young.

Ani is grateful for their upbringing, especially after hearing stories from other LGBTQ+ youth who had a much harder time coming out. “The fact that I was able to realize myself at such a young age, that wouldn’t have happened if I wasn’t in such a welcoming household.”

Ani wanted to use their confidence to help other people. They started a Gay-Straight Alliance (GSA) at their K-8 school. “A lot of my friends didn’t have a supportive place to go, and I wanted to give that opportunity for people who didn’t really have that.” Parent Kendra adds, “It wasn’t met whole-heartedly.” Another group of students started a “straight alliance” and would rip down GSA posters. “I wasn’t surprised,” says Ani. “Because they’re 14-year-olds. They just care about what they think and their mindset and so I tried changing that.” Ani would have conversations with the kids at school, and it worked. The bullying stopped through Ani’s patience and compassion.

Ani hopes to continue this work by volunteering at Rainbow Alley, once they’re old enough. For now, they are a member. “Rainbow Alley is a youth center where people of the LGBTQ community can come together and be themselves.” They’ve been going for two years. It’s located at The Center on Colfax, and adults are not allowed. “It just became a really good and kind place for people to appreciate each other and make friends.”

For closing thoughts, Ani adds, “there’s people who are different than you, and if everyone treats each other with respect maybe we would get to a place where everyone is prideful of themselves. If everyone accepted each other for who they are, even if they don’t agree… the world would be a much better place.”