DENVER— Halloween. 1880. Colorado had only been a state for 4 years when Denver had its first race riot. The anti-Chinese violence erupted on the eve of a U.S. presidential election – so its timing meant the event had an outsized impact on national policy in a racially-charged society. Sound familiar? But 1880 was not exactly 2020.

Denver’s population was less than 36,000 and, of that, only 238 were Chinese. Yet a mere ten years earlier, there had only been 4 Chinese people counted in the city. This exponential growth was noticed and feared by some who thought these 238 people were out to take “American jobs.”

“Journalists” also published articles pointing out that the Chinese were descended from the Mongol Empire and therefore they must want to take over the United States. Denver’s Chinese neighborhood was targeted as a den of many vices: prostitution, gambling, opium.

So, Denver’s Chinatown became a target – just as this anti-Chinese hysteria was racing through the West. And on the fateful afternoon of Halloween, 1880, a drunken saloon brawl between some intoxicated white customers and two Chinese men spiraled from the bar into the street. A mob formed and they beat every Chinese person in sight and destroyed every Chinese business in the area (for which there has never been any compensation).

The riot took the life of one Chinese man named Look Young – who was hanged. Many others were brutally beaten. An anti-Chinese panic was burning through the entire West – igniting 153 riots during the 1870s and 1880s. Many of these violent events ended with much higher numbers of dead and injured, but this riot took on added significance because it happened just two days before the presidential election of 1880.

Since the Civil War, Republicans had been seen as the anti-racism party – so they were reluctant to join the political swell rising against Chinese immigrants. But Denver’s Chinatown Riot – at this politically-charged moment – compelled Republicans to jump on the “Yellow Peril” bandwagon. If they wanted to hold power in the West, they decided they would have to join the effort to stop unrestricted Chinese immigration.

Legislation ensued. The Chinese Exclusion Act of 1882 was the first significant immigration regulation in the United States. It essentially banned Chinese laborers from entering the country. And Chinese migrants already here no longer had a path to citizenship. This legislation remained in place until 1943.

140 years after the Denver Chinatown Riot, on October 31, 2020, Mayor Michael B. Hancock offered a proclamation declaring the anniversary as “Denver’s Chinatown Commemoration Day.” 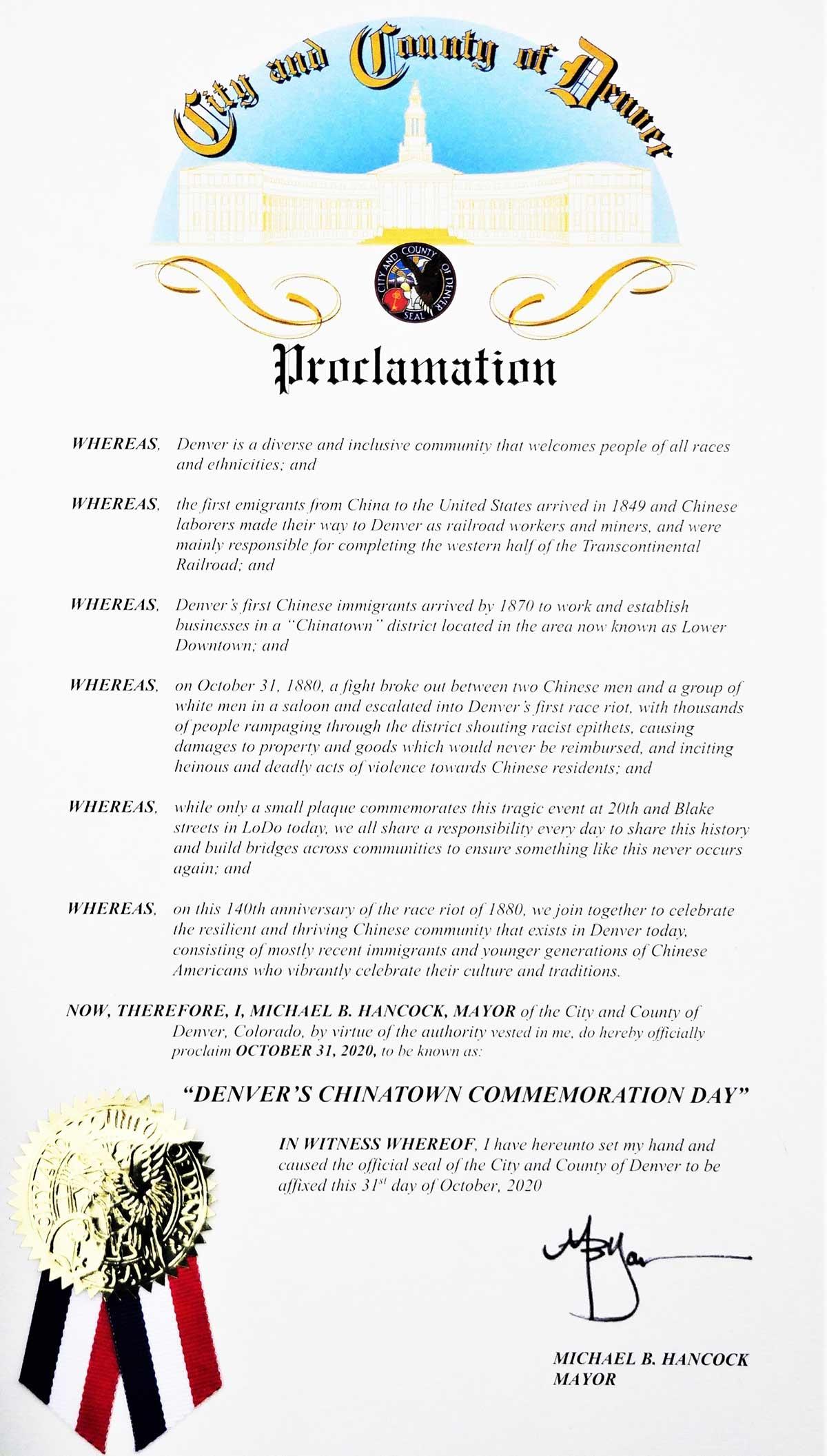