Update, May 13, 2022: Following the protest, Denver Public Schools officials confirmed that teacher Tim Hernández was placed on paid administrative leave for the rest of the school year. You can read our original story below.

DENVER — Students at Denver’s North High School walked out of class May 13 in support of Tim Hernández, a beloved Chicano teacher whose contract was not renewed for the next school year.

The walkout and ensuing march started around 8:30 a.m. Friday, with students walking from Viking Park, down the streets of 38th Avenue to La Raza Park. The park was an epicenter of Denver's Chicano-rights movement of the 1960s and '70s.

Hernández’s contract not being renewed was the catalyst for the walkout and march, but the protest — led by students of color — also focused on the changing demographics of their school and surrounding neighborhood.

During the march, students, North HS teachers and community members chanted “this is the Northside, not the Highlands” and “Brown people used to live here.”

“For me, personally, Mr. Hernández is more than just a teacher. He’s a mentor to me and so many other kids,” said Nayeli López, a freshman at North and one of the organizers of the protest. “I’m a Chicana student and I haven't had a Chicano teacher … for as long as I can remember. So to have someone there that represents me, that speaks like me, that looks like me and that knows the power that our people have is super important.”

For these students, Mr. Hernández is more than a teacher

Many students, including North HS junior Cebastian Gomez, wore t-shirts emblazoned with the phrase “Mr. Hernández is North.” Gomez told Rocky Mountain PBS that his anger is what brought him out to the march Friday.

“My anger that has been carried with me since middle school,” he explained. “This is the students leading the protest … in an effort to show that we need more Black, Indigenous, people of color teachers at North — period.”

Hernández, who teaches in North’s English department, told Rocky Mountain PBS in a May 12 phone interview he believes his contract was not renewed “for retaliatory reasons, for discriminatory reasons.”

But earlier this year, Hernández’s contract was not renewed, despite a letter of support from his department that touted his community involvement and connection with students.

“Tim has inspired his colleagues and students in ways that we have not seen at North in a long while,” the letter reads. “We cannot imagine our North community and English Department without him.”

Hernández told Rocky Mountain PBS that he was openly critical of the school’s COVID-19 protocols, which he deemed insufficient (students protested about those, too), as well as the dress code, which he felt targeted students of color.

“And because of that, I've clashed with my principal and my administrators multiple times,” Hernández said. “And over anything, I have done it in the service of what I know that my neighborhood needs — what kids that look like me, dress like me, talk like me, need.”

Carla Dams Ramos, an English language development teacher at North who was at the march, told Rocky Mountain PBS she and other teachers of color have faced many microaggressions in her eight years teaching at the school.

“I know Mr. Hernández. I’ve seen him teach; I have seen him interact with the students, form relationships, lead. And not only [is he] a wonderful, amazing teacher, but he’s also a teacher that our kids trust, need and have asked for for a long time,” Dams Ramos said. “Now that we finally have him and the kids follow him … the administration finds that dangerous, and finds that intimidating to the hierarchy of power.”

Denver Public Schools does not discuss specific personnel decisions out of respect to the privacy interests of the employees involved. In general, while many teaching positions within DPS are on automatically renewing contracts, some teacher positions - including associate teacher positions - are not. All teachers are provided advance notice as to whether their position is on an automatically renewing contract. When a teacher applies for a position within the same school, they submit application materials to a hiring committee composed of an administrator and other teachers from that school. The hiring committee conducts interviews, reviews applicant materials, and ultimately hires the candidate they believe is best suited to meet their students’ needs.

Hernández grew up two blocks from where he teaches. He said the northside of Denver is the most gentrified Latinx neighborhood in the country; recent data show the number of residents who identify as Hispanic and Latino in the area has rapidly declined.

“We are being pushed out of every other space in our neighborhood. We're now being pushed out of our school,” said Hernández, the English department’s only Latino male teacher in a school where roughly two-thirds of the student body identifies as Hispanic. Pribble sent Rocky Mountain PBS data showing 70% of North’s teaching staff is White.

The May 13 walk out follows protests from earlier in the week, when students staged a sit-in and chanted “Who do we want? Mr. Hernández! Where do we want him? North High!” 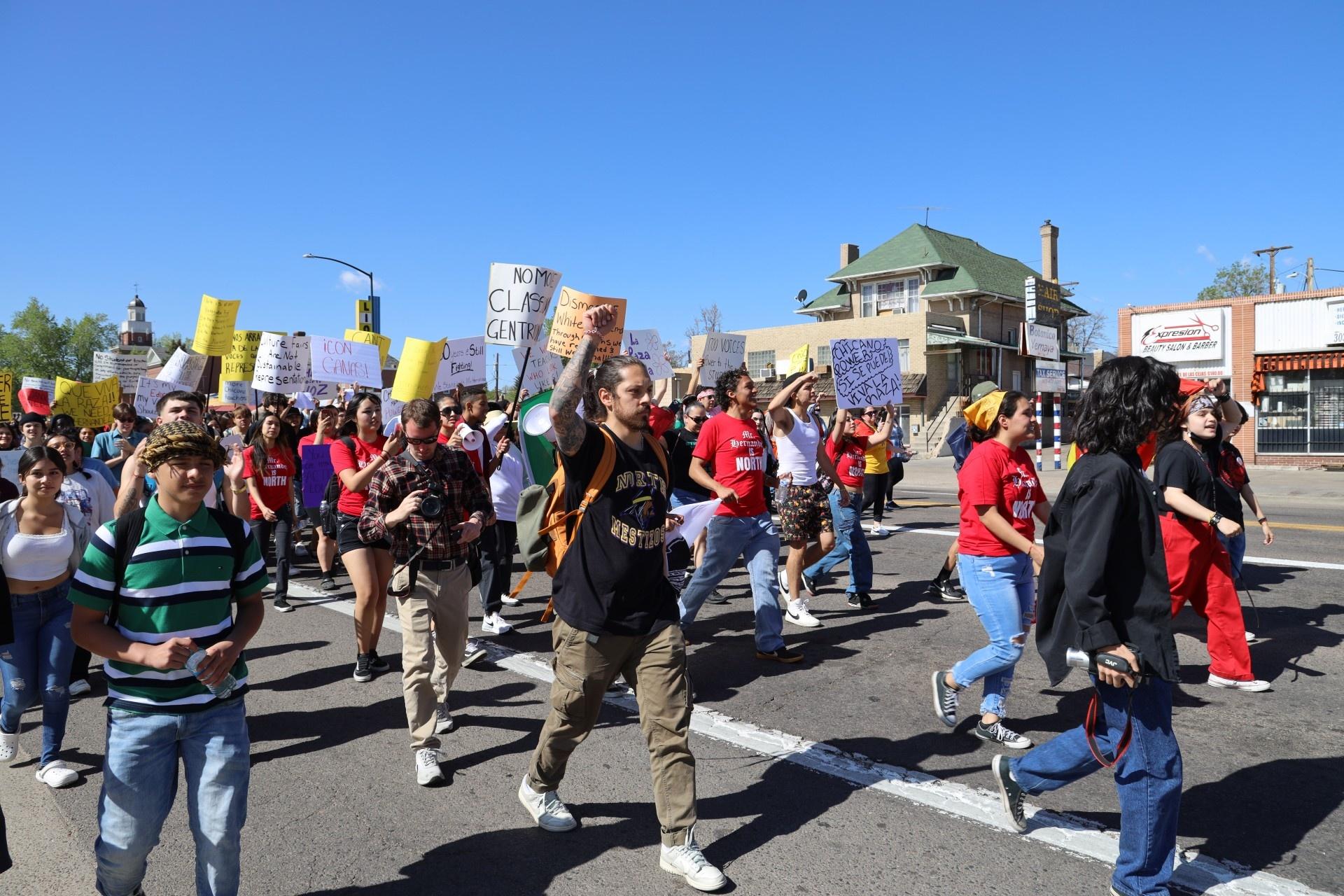 The support has been overwhelming for Hernández, who emphasized that he did not encourage the students who have planned the protests.

At the May 13 march, Hernández told Rocky Mountain PBS he initially didn’t plan on participating in the walkout. That changed when he entered an empty classroom Friday morning.

“And that was enough for me,” he said.

For kids that come from the northside of Denver, Hernández said, being a teacher was not something that was not communicated as a realistic career goal. “We're not given the opportunity to be courageous enough to be a doctor, a lawyer. We're told to be mechanics and gardeners and construction workers,” he said.

“The problem of what is happening in our school is that students are not being offered choices to be … something that they can't see,” Hernández continued. “I'm an opportunity to be courageous about what they believe they can see for themselves.”

For teachers of color, Hernandez concluded, “we have the responsibility to model what we do in situations of injustice when we are inevitably faced with white supremacy … because for our students, it's not an ‘if,’ it's a ‘when.’ And all I'm hoping to model to my students is they should never feel like they have to be silenced by it. If that's disruptive, then count me in.”