'Standing in the Gap' Screening Shows Re-Segregation in Denver Schools

Twenty years after the end of federal court mandated busing, Denver Public Schools are re-segregated, according to Standing in the Gap, a new four-part documentary series by Rocky Mountain PBS.

Today, the documentary shows, Latino students are arguably more segregated in predominantly Latino schools than black students were in the pre-busing days.

The return to neighborhood schools in a city where many neighborhoods are racially and socioeconomically segregated is the major cause of segregated schools, an analysis by Rocky Mountain PBS News found. Although achievement has improved for all students, staggering educational gaps still exist between white students and those of color, according to the analysis.

Last week, host Cynthia Hessin of Colorado State of Mind talked with the producers of  Standing in the Gap about their vision for the new documentary series. You can watch that discussion here: 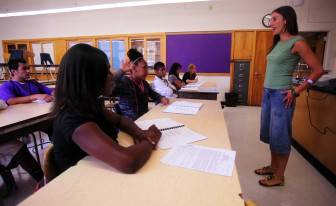