CLEAR CREEK COUNTY, Colo. — In Denver, visitors and residents alike can orient themselves by looking towards the Rocky Mountains sprawling to the west.

But when Fred Mosqueda of the Southern Arapaho visits Denver and looks west, he sees Mount Evans and, to him, “that mountain, that name brings sorrow and grief to the Cheyenne [and Arapaho].”

Mosqueda is the Arapaho Coordinator for the language and culture program within the Education Department of the Cheyenne-Arapaho Tribes in Oklahoma. Mosqueda and his counterpart for the Cheyenne, Chester Whiteman, who is Southern Cheyenne, put forth a proposal to change the Mount Evans name.

The rugged 14,130-foot-high mountain has been a landmark for centuries. Mosqueda recalled how both the Cheyenne, Arapaho, and other tribes also once used to look west to orient themselves from the plains.

“Our biggest band of Arapahos lived there on Cherry Creek,” he said.

But European colonization and settlement beginning in the 17th century would eventually claim landscapes and impose names on majestic landmarks. Even before Colorado became a state and its borders were sketched onto a map, the mountain was given the name Mount Rosa or Mount Rosalie by Albert Bierstadt, a famous painter of the West, after his wife-to-be. It was also a reference to Switzerland’s highest peak, Monte Rosa.

In 1895, the mountain was officially named Mount Evans after the second territorial governor of Colorado, John Evans.

But for Mosqueda, the name makes him think of “the loved ones who were slaughtered and killed there on the plain” in the Sand Creek Massacre.

The massacre was a result of Evans’ authorization to “kill and destroy, as enemies of the country … all hostile Indians” in a proclamation issued August 11, 1864. More than 200 Cheyenne and Arapaho people — mostly women, children, and elderly — were murdered under this authorization.

Evans was eventually forced to resign the governorship in 1865, despite an attempt to cover up his involvement.

However, his legacy of violence has persisted for over a century. Thirty years after his fall from office, Evans was honored with the naming of Mount Evans. His proclamation, meanwhile, was only officially rescinded in 2021 through an executive order by Governor Polis.

Mosqueda and Whiteman began talking about the mountain’s name a few years ago and started to brainstorm.

“I said, ‘If it was just me, then it would be easy,’” recalled Mosqueda. “I told him, ‘But there's two tribes here, so we have to have a name that can cover both tribes.’” He said that while the Cheyenne and Arapaho are two different federally recognized tribes, they always work together.

And they found the perfect overlap in the name Blue Sky. According to Mosqueda, Whiteman said, “the Cheyennes have a ceremony that’s a renewal life that they do every year … called Blue Sky … and your people (the Arapaho) are called Blue Sky.”

Whiteman and Mosqueda first brought the name to their Chiefs to approve. They then found support in Paul Spitler, the director of wilderness policy for the Wilderness Society. Spitler co-authored a petition and the name suggestion became widely supported by other conservation organizations, government officials and various tribal leaders.

Mosqueda said that tribes are very supportive of each other; they write letters of support whenever one is pushing a name change. “There are 48 tribes that have ties with Colorado … we’re all trying to work together,” he said.

This is the second time in just a few months that a Clear Creek County mountain will have its named change. In December of last year, what was once Squ*w Mountain officially became Mestaa’ėhehe Mountain. Squ*w, sometimes called the “S-word,” is a derogatory term for Native women.

Four other names were proposed through the Colorado Geographic Naming Advisory Board to replace Mount Evans: Mount Cheyenne-Arapaho, Mount Evans (to honor Evans’ daughter instead), Mount Rosalie, and Mount Soule. But the Clear Creek County Board of County Commissioners voted on March 15, 2022, to recommend Mount Blue Sky to the state and federal naming boards and Governor Polis.

The board's next meeting is April 10, but it is expected to dedicate most of the meeting time to discussing the nearly 30 Colorado landmarks that have indigenous slurs in their names. It is unclear at this time when a final vote will be taken to officially rename Mount Evans.

Mosqueda thinks Mount Blue Sky is a name for everyone.

“It's such a happy name. It’s for a beautiful ceremony. It's for beautiful people. This was our homeland here … so, when we come to Colorado, when we look west and we see Mount Blue Sky, [we will] feel happy. We [will] feel like we are at home.” 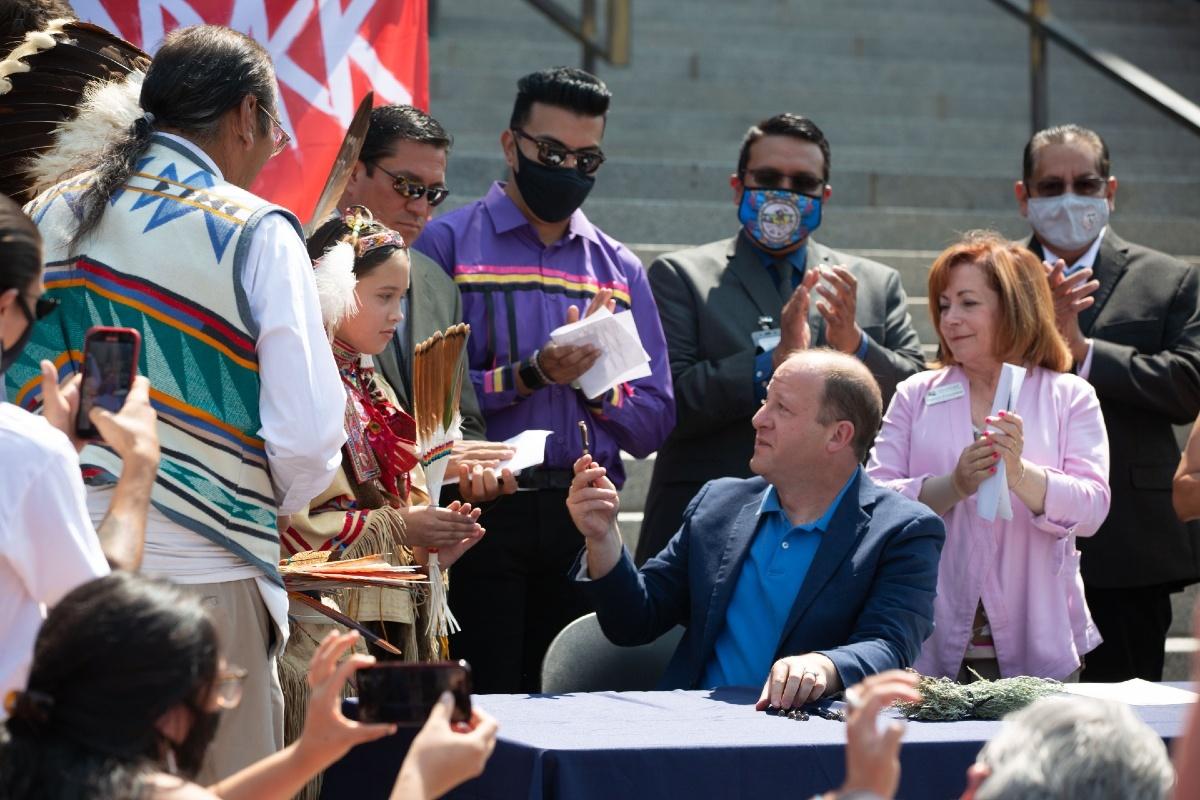