Capitol Hill is lined with illegal, anti-homeless fences. The city won’t remove them.

DENVER — In the Capitol Hill neighborhood, public sidewalks, tree lawns and patches of grass are blocked with orange, mesh safety fences typically used for construction. But Rocky Mountain PBS found several instances of these fences being used to keep tents and encampments out of public rights-of-way.

The practice is illegal, but there are at least 20 of these fences around the Capitol Hill neighborhood, spanning from Broadway Street to Downing Street, and Eighth Avenue to Colfax Avenue. Most fences are orange; some are green and some are chicken wire. Nevertheless, all can be purchased online for less than $40 per 50 feet.

The city’s code outlines several areas banning such structures. Most neighborhood residents who have raised concern over the issue cited, “encroachment placement shall not interfere with the safe and efficient passage of pedestrians and vehicles and shall not impede access to utilities, traffic control devices, or between the street and the Sidewalk,” from the city’s right-of-way rules and regulations.

Denver defines a right-of-way as “an area of land owned or controlled by the city for the purposes of constructing, operating and maintaining public facilities such as streets, alleys, sidewalks, bike paths for the needs of transportation for any reason.” Those wishing to block a right-of-way must obtain a permit from the Department of Transportation and Infrastructure (DOTI) to do so, but according to members of DOTI’s advisory board none of the fencing in the area has requested or obtained a permit. The city also publishes a map of where its permits have been granted, and none of the current fencing is on the map.

“There are very valid reasons for encroaching in the right-of-way and you can acquire a permit for those. All of them, though, require a permit,” Jonathan Pira, a DOTI advisory board member told Rocky Mountain PBS.  “Nearly all of those encroachment types are a temporary permit for one of a variety of reasons. And the prevention of lingering or loitering is not one of those reasons.”

The advisory board, which formed in June 2021 to be a liaison between DOTI staff and city residents, has heard numerous complaints from neighborhood members about the issue in the last few months, with many citing the illegality of the fences and claiming they are a safety hazard and an eye sore.

When a resident wants to report a right-of-way violation, they must call the 3-1-1 hotline — the city’s phone number for non-emergency issues that warrant a city response but are not a public safety crisis. Once a report is made, a DOTI inspector is assigned to evaluate for visible safety violations and address any immediate safety concerns.

Nancy Kuhn, a DOTI spokesperson, told Rocky Mountain PBS that inspectors only enforce the issue if they determine a safety concern.

“Our right of way services inspectors are primarily looking at sight lines; so, making sure things in the tree lawn area aren’t blocking views around corners and restricting a driver’s ability to see someone walking or biking by,” Kuhn told Rocky Mountain PBS in an email. “Also looking to see if anything is impeding a person’s ability to walk on the sidewalk or use the street.”

Records obtained by Rocky Mountain PBS show DOTI inspectors responded to 26 complaints related to fencing in Capitol Hill since June 2021, but did not issue any citations or cite any violations, which Kuhn said is because they found “no significant visible safety violations.”

The fences are still illegal, but because DOTI did not issue a citation, the fences stayed up. DOTI staff also closes cases after examining the complaint and determining they are not safety violations.

During the public comment period in a March 3 DOTI advisory board meeting, Capitol Hill resident Kim Morse voiced aesthetic and safety concerns regarding the fencing.

“Residents who drive average-size sedans find their visibility impaired in Cap Hill as it is because of the dense bank of parked cars at every intersection. Now add two layers of fencing,” Morse explained. “Remember this is wrapped around the entire tree lawn. And how well do you think you can see whether or not another car is coming when it's safe to proceed through the intersection?”

Another Capitol Hill resident, Katie Blakey, shared similar concerns about a fenced-off area at the intersection of 12th Avenue and Sherman Street.

“This fence has been up for several months. The metal fence is about six feet tall, and the orange fencing around it is four feet tall. It's wrapped around that stop sign next to it,” Blakey said. “It is a huge hazard from a visibility standpoint because of just how tall the fencing is.”

Additionally, if a resident reports a violation through 3-1-1, DOTI inspectors need a physical address to cite a violation. If inspectors are not provided a specific address, the case is automatically closed.

Shannon Hoffman, who also lives in District 10 and spoke during the advisory board’s public comment, reported two fences to 3-1-1 that “have been up for at least six months or more,” she said. “They were immediately closed by 3-1-1 and said that I didn't give a specific address. I gave pictures and I gave an intersection of where they're located.”

Cohen said the city’s inability to respond without a specific address is a headache for residents raising concern.

“So that person, you know, maybe spent 15 minutes filling that out. They have to start all over again,” Cohen said. “And it's basically kind of like a way of saying ‘no comment’ forever, and some people give up.” 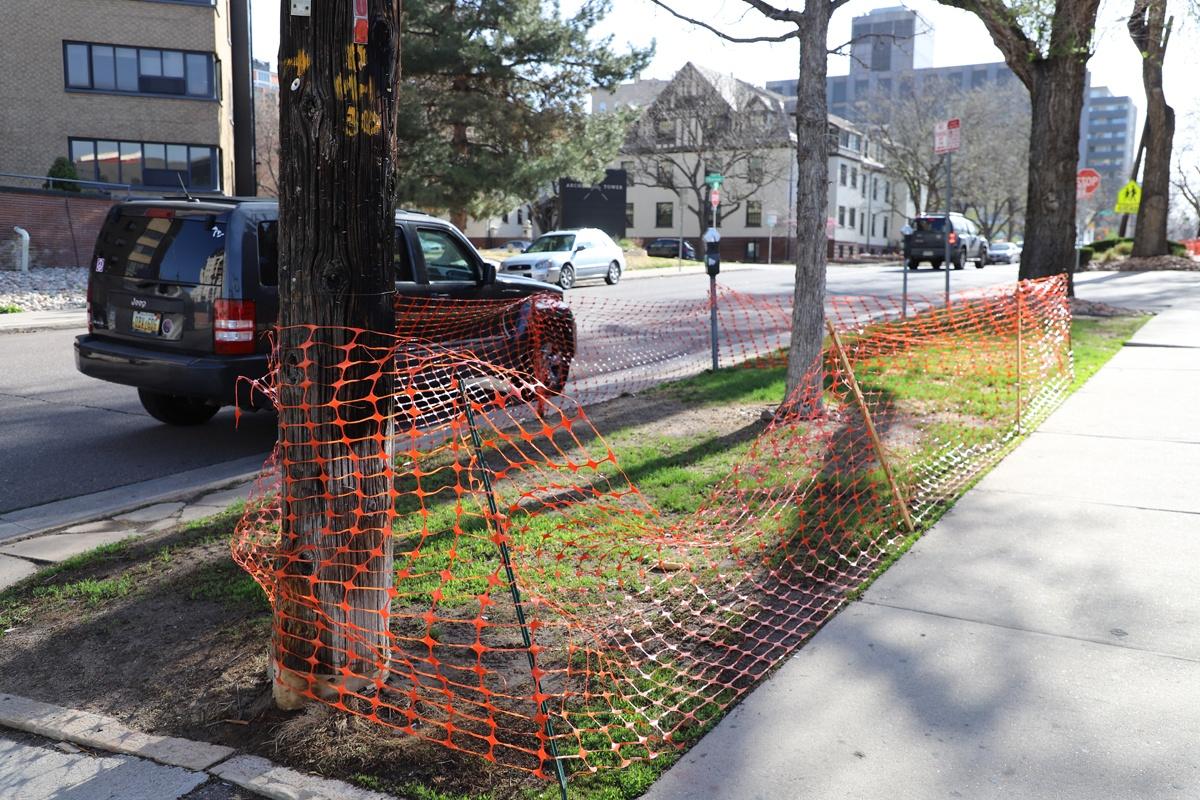 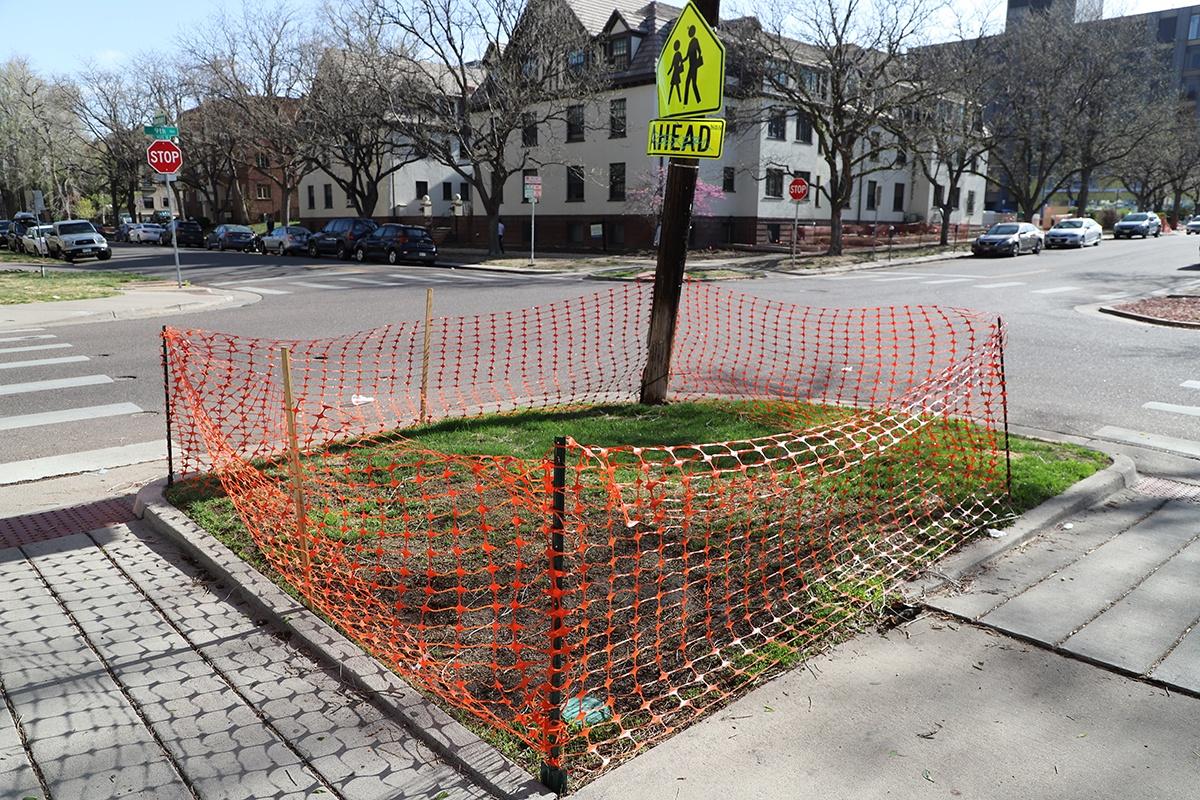 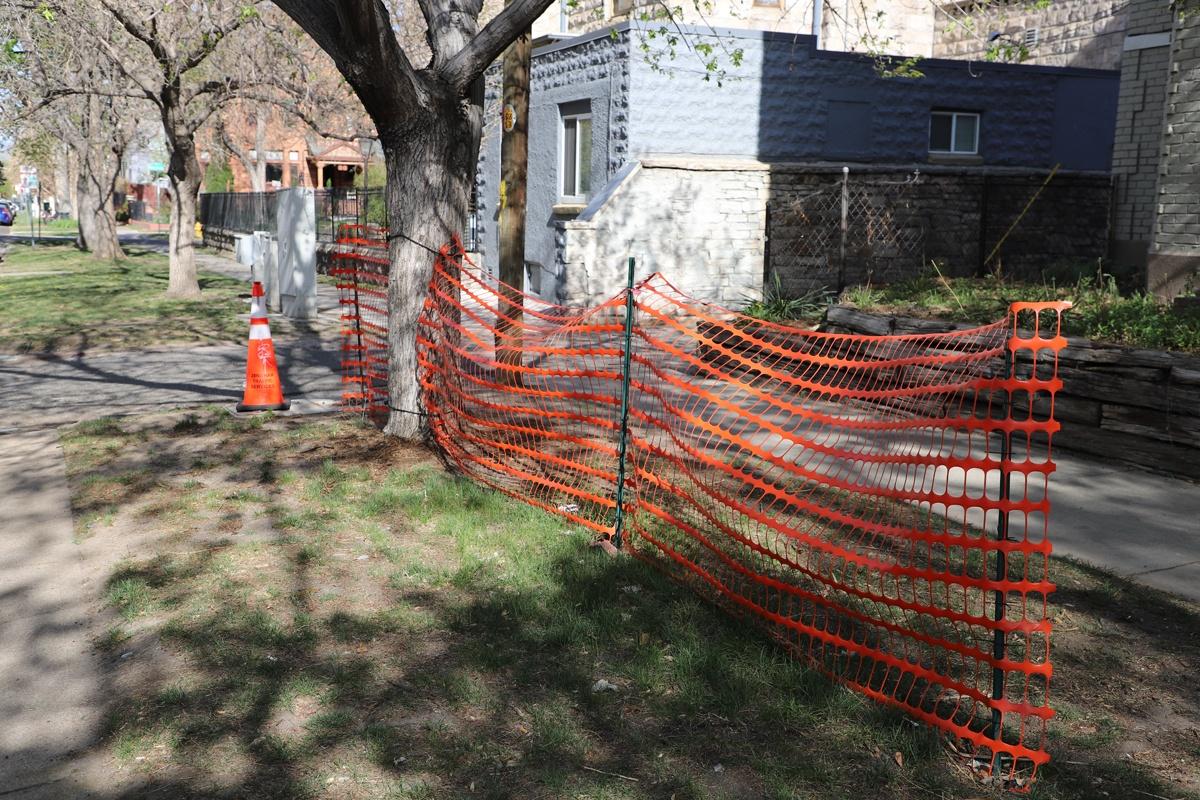 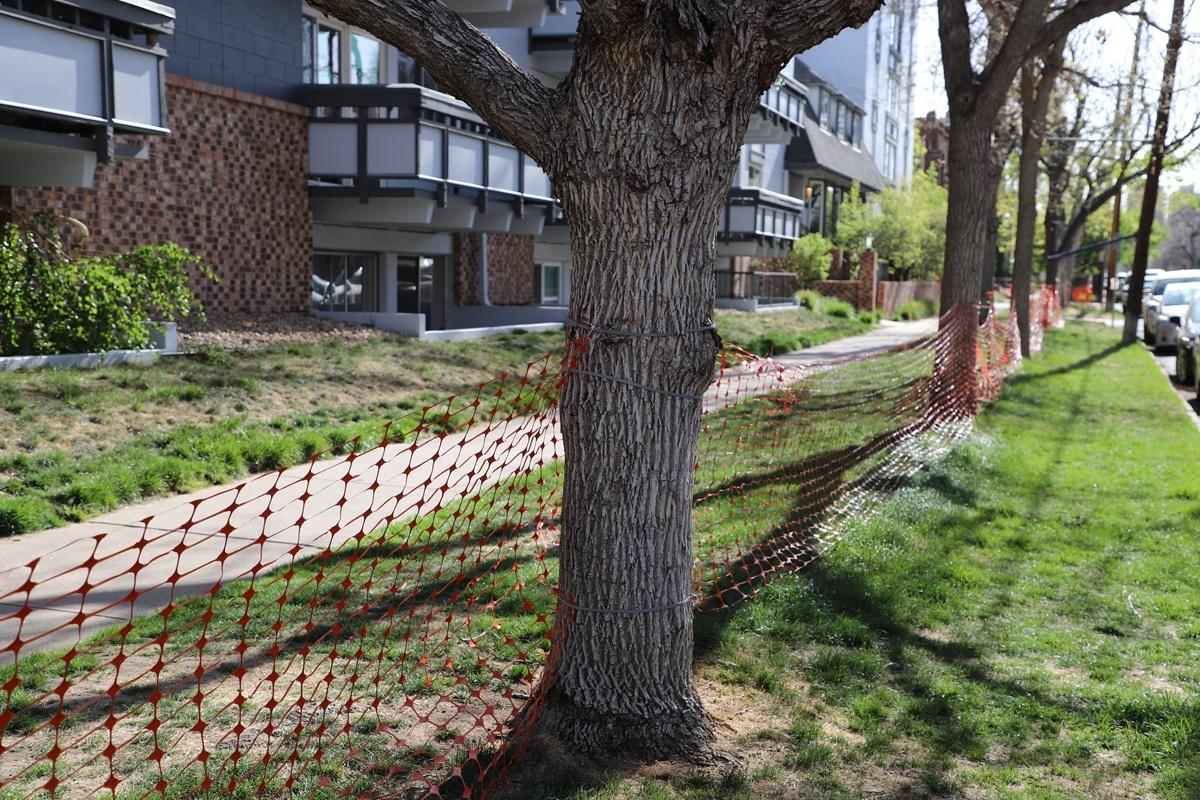 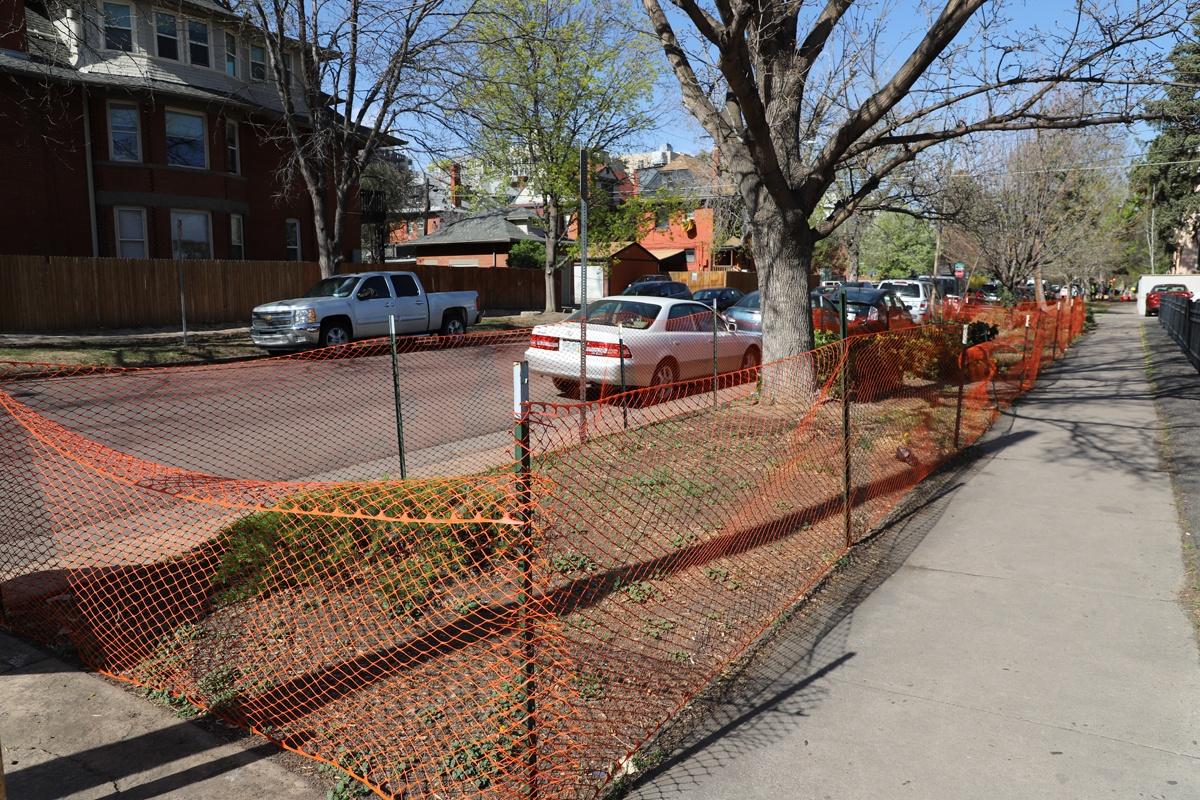 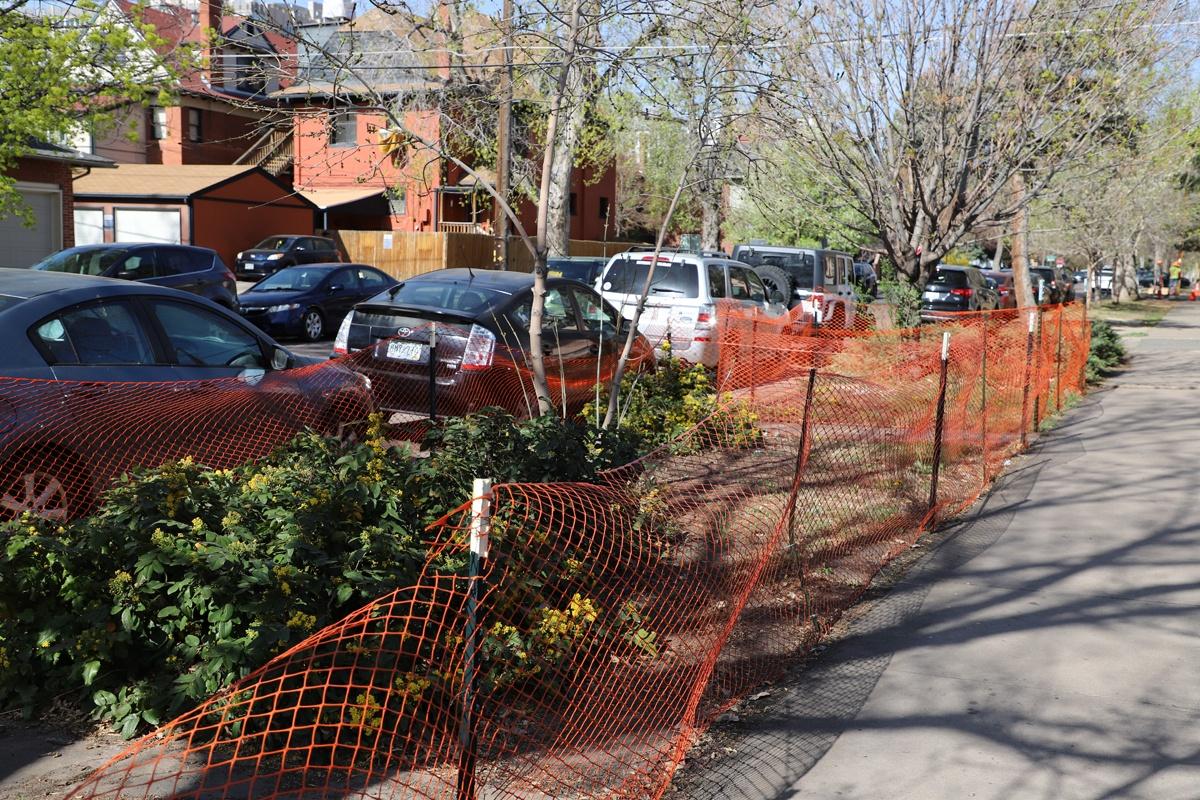 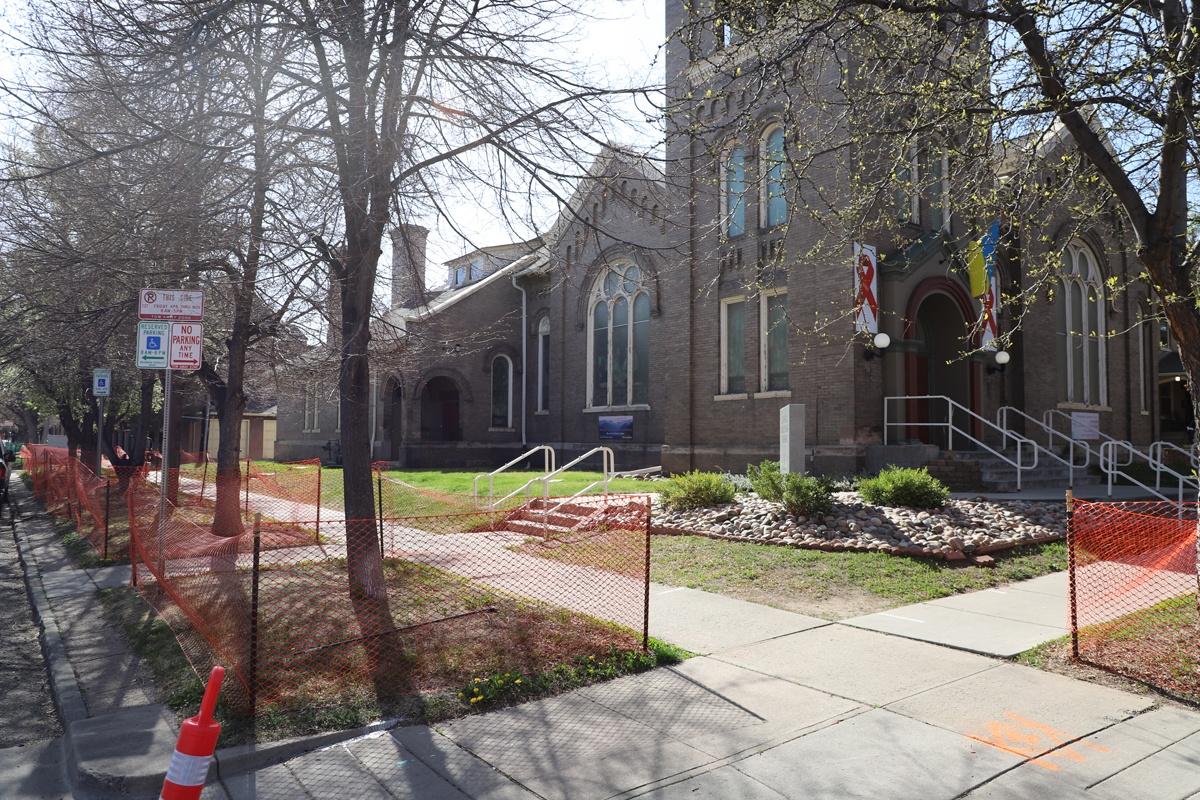 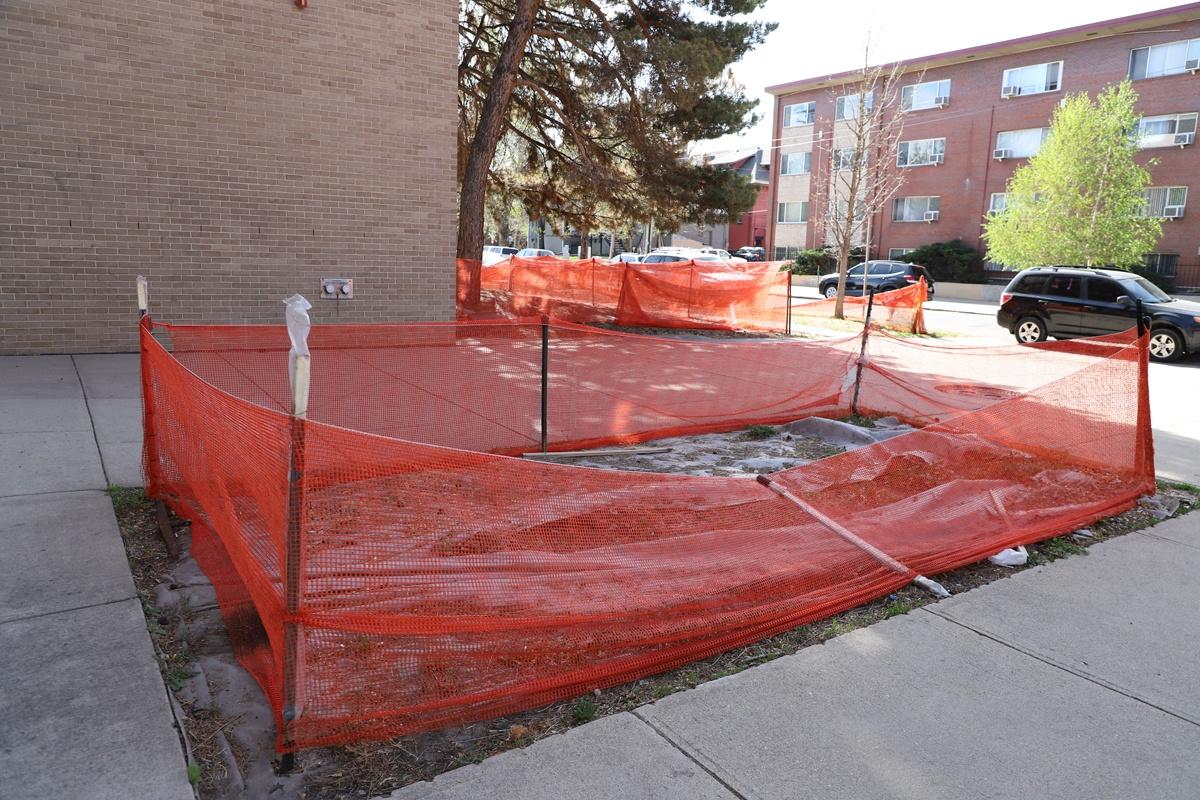 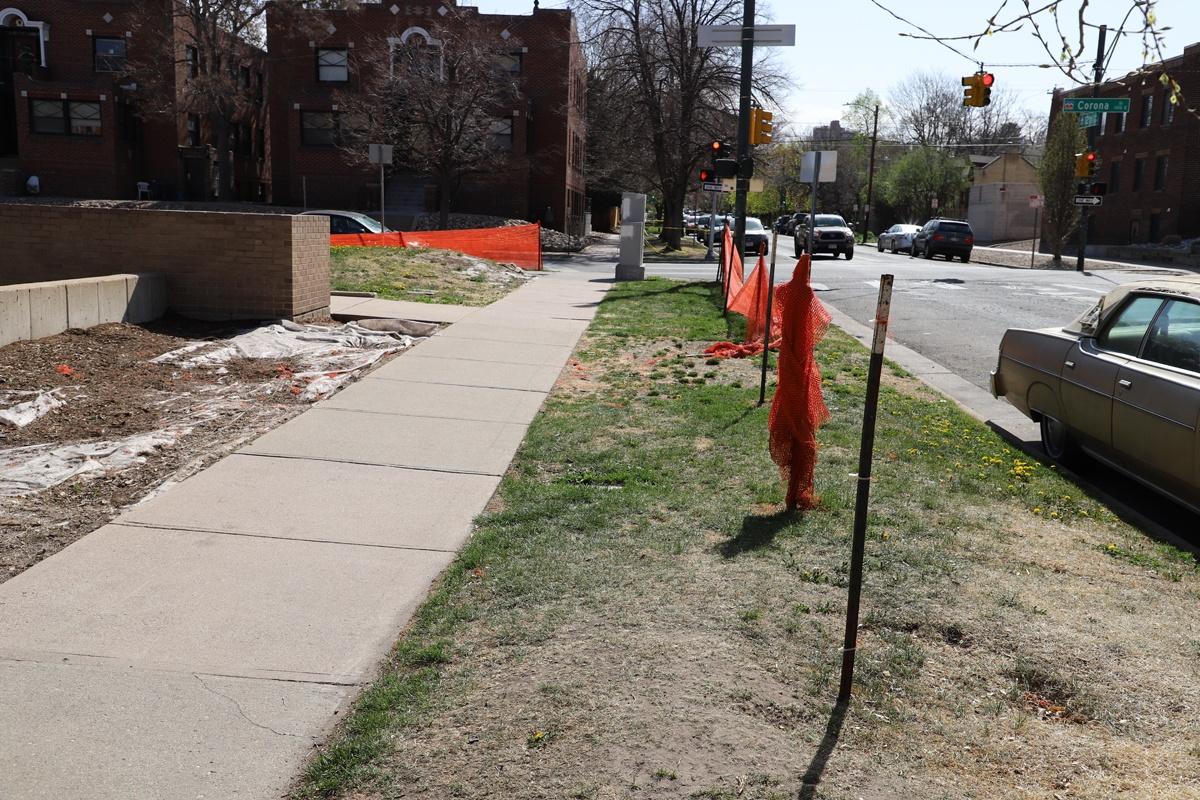 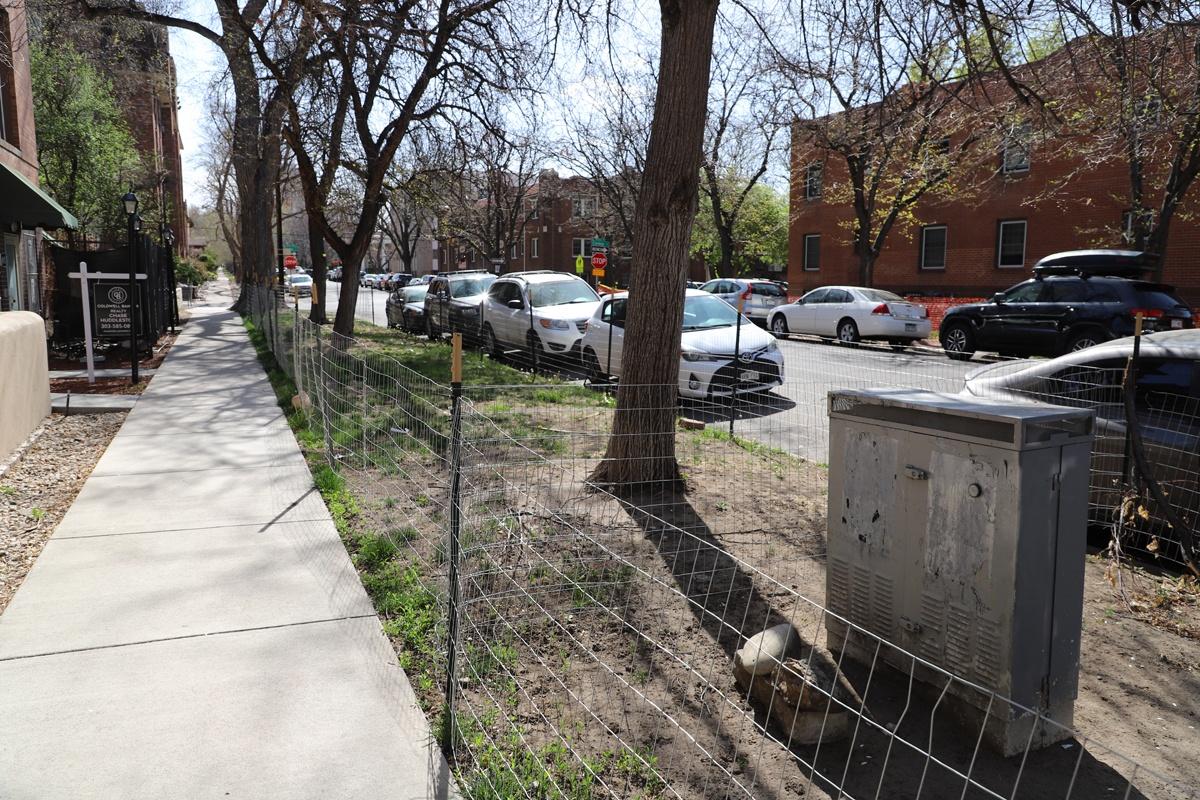 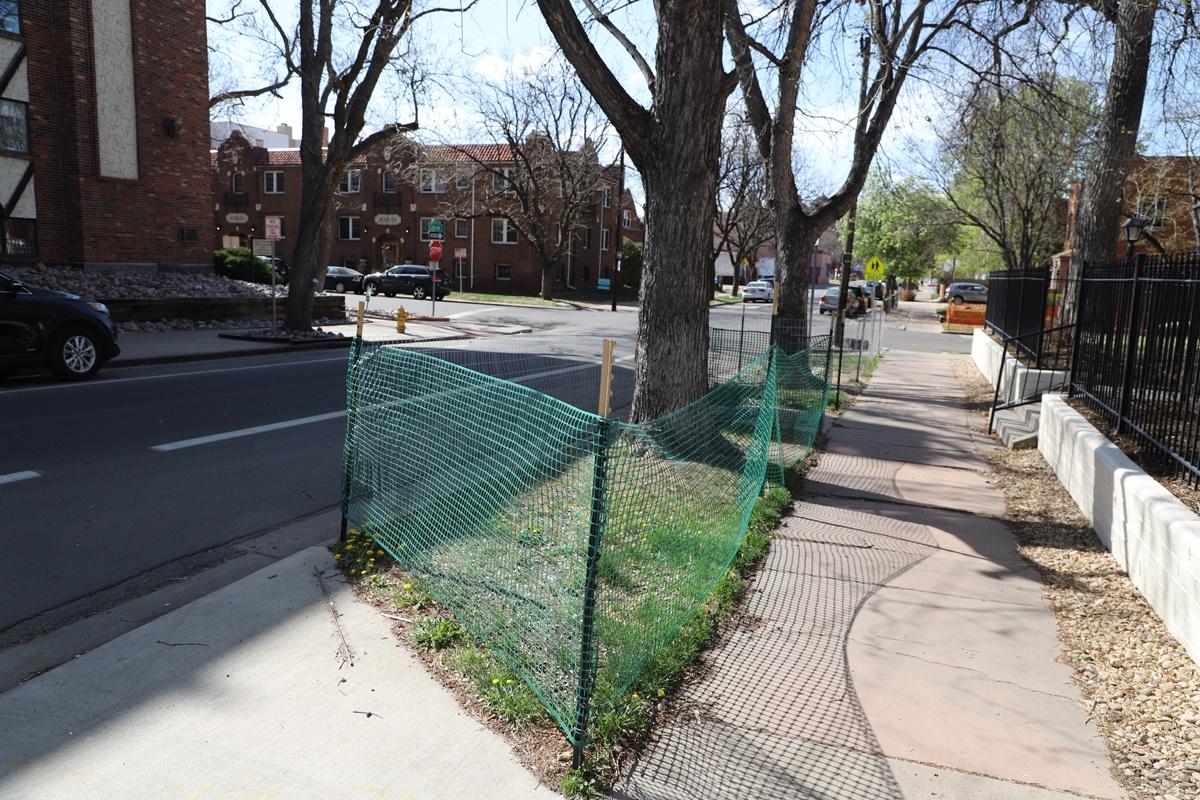 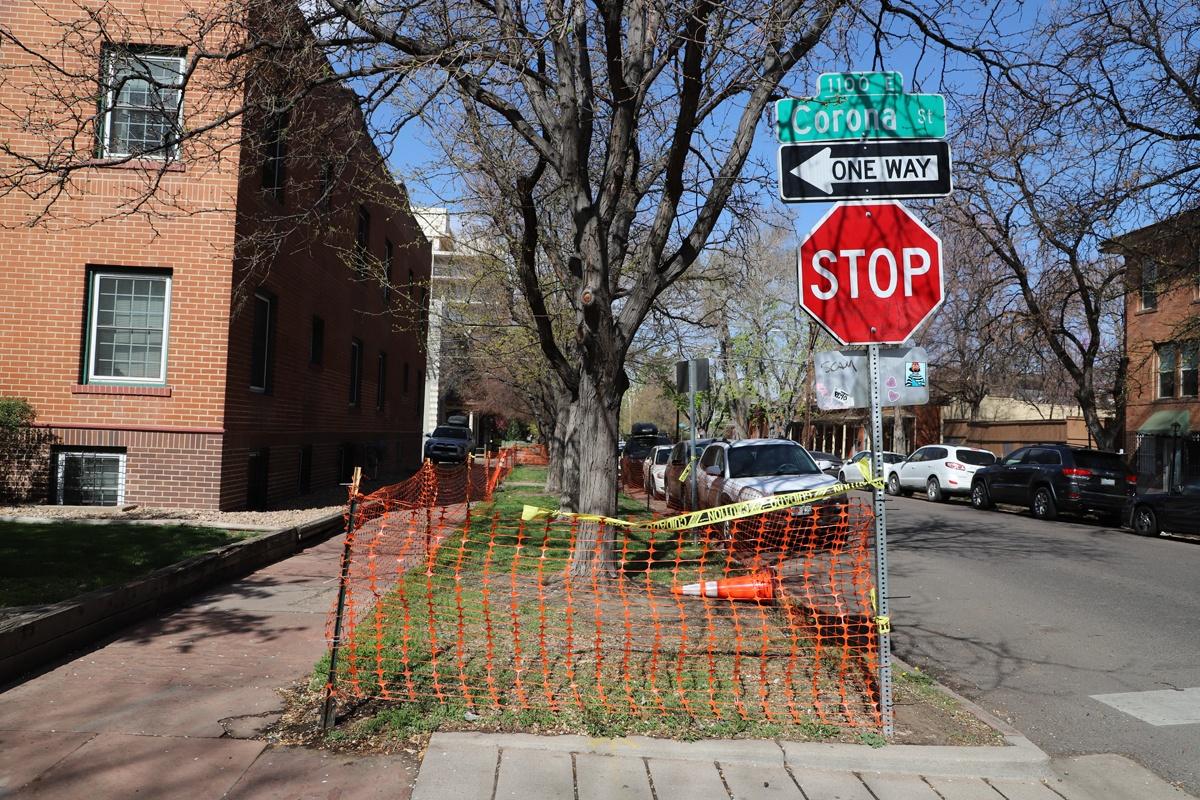 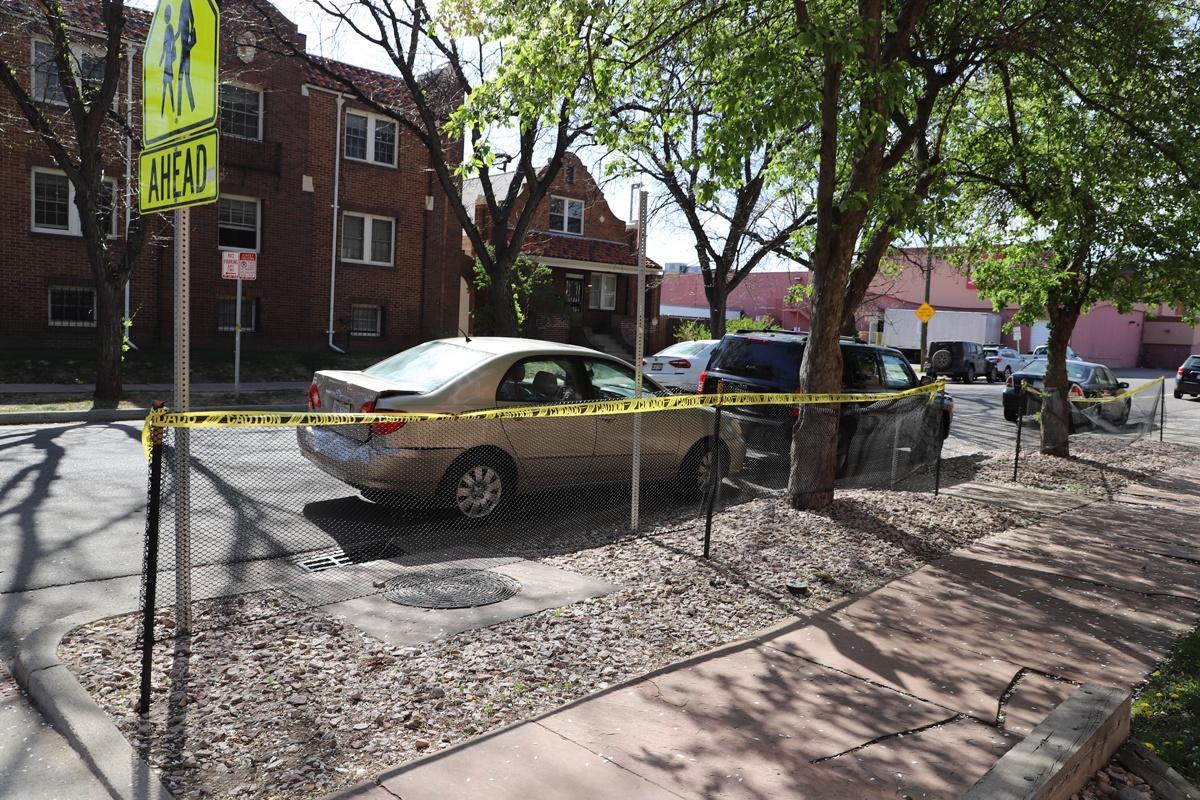 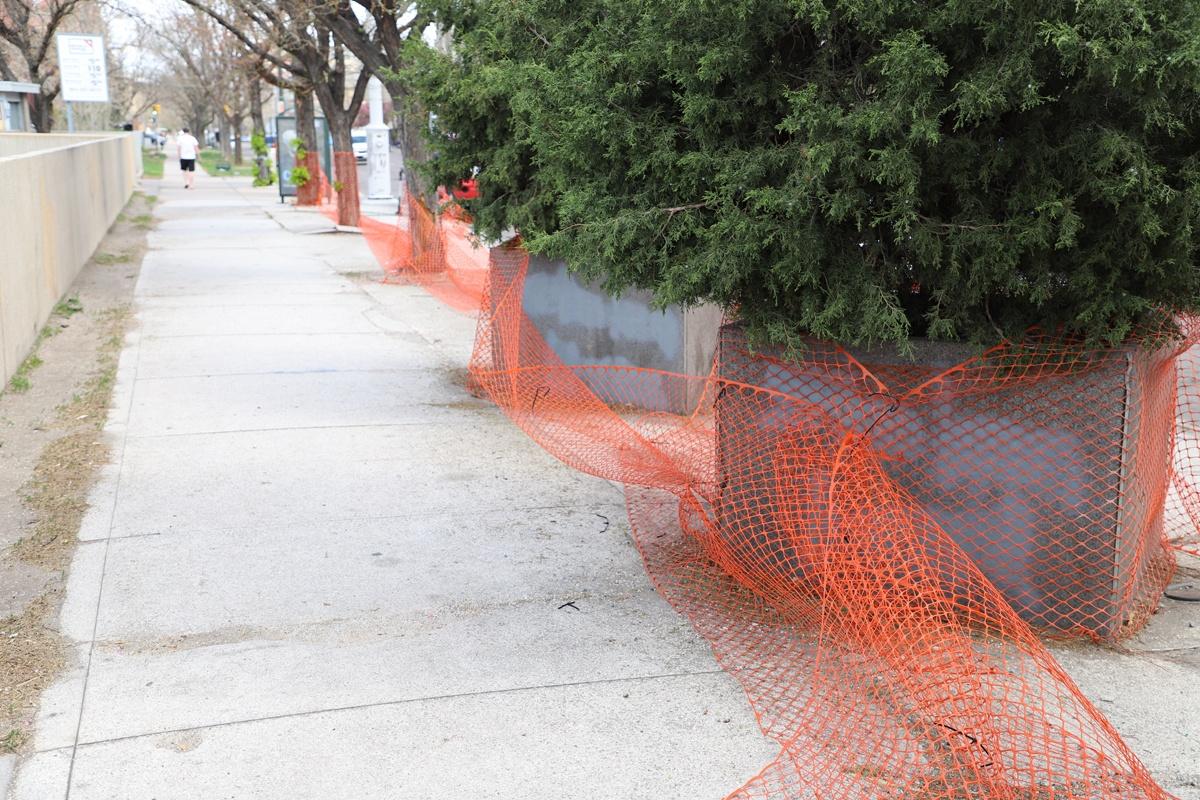 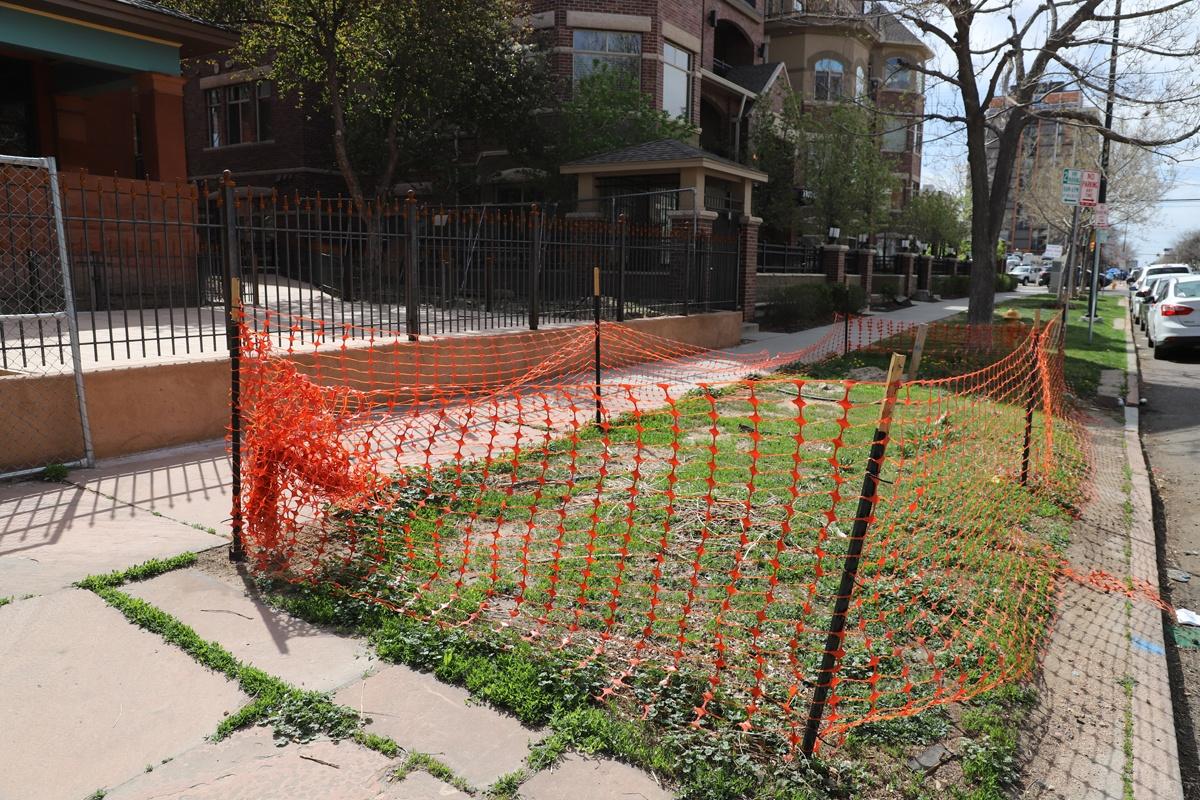 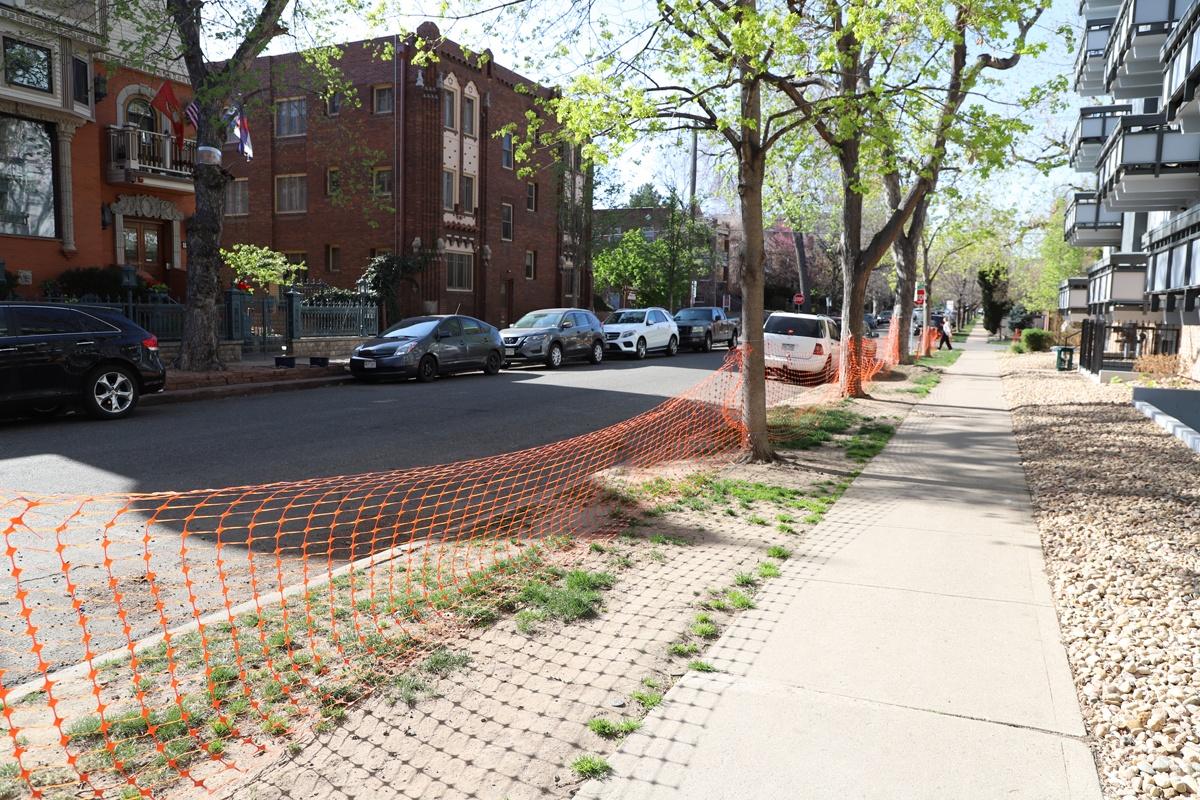 While it’s difficult to determine when the first fences started popping up throughout Capitol Hill, Jake Cohen, who represents the Capitol Hill district on DOTI’s advisory board and has lived in the neighborhood for seven years, remembers noticing more fences in June 2021.

When the city of Denver temporarily closed Civic Center Park in September 2021 in an effort to eliminate environmental and public health risks and “rehabilitate one of the centerpieces of Denver’s parks system,” many of the city’s unhoused population moved to Capitol Hill. As a result, more tents and small encampments appeared in the area.

“That's when a lot of people started moving from Civic Center up to Capitol Hill,” said Cohen. “And so I think that, you know, a few people started putting up the [fencing] initially, and part of it I think, was actually a lesson learned from DOTI, because when DOTI does engage in the sweeps, they actually put up temporary fencing, as well. But you know, that is a permitted DOTI operation … But that was kind of where that behavior was learned.”

Though the city prohibits fencing off public sidewalks and open space, DOTI does not seek out right-of-way barriers. Instead, they respond to complaints that are identified by DOTI as safety issues.

“At this time, DOTI is handling landscape fence complaints by focusing on whether there are any major safety issues present that need to be addressed,” Nancy Kuhn, a DOTI spokesperson, told Rocky Mountain PBS in an email. Rocky Mountain PBS made several attempts to speak over the phone with DOTI staff members but did not receive a response.

But despite no safety violation found, according to DOTI, the fences are still illegal because those who put the fences up did not obtain a permit to do so or the permit has expired.

“I think what we're kind of looking at as a long trend of the right-of-way not being enforced, and it's actually just really showcasing itself in this issue,” Cohen said.

Instead, DOTI’s right-of-way priority lies with parking enforcement, like parking lanes and street sweeping, Cohen said. “There's a much smaller crew that works on the enforcement for the rest of the right-of-way.”

The lack of enforcement, Cohen said, has given residents a false understanding that they have authority to take control of rights-of-way.

“We're kind of starting to see the consequences of when you let people have free rein over public spaces,” he explained.

After witnessing DOTI put up temporary fencing after a homeless sweep, Cohen said residents begin putting up fences of their own.Citizens for A Safe And Clean Denver, a neighborhood group that advocates against urban camping, promoted and encouraged these encumbrances, Cohen said.

“I think not giving warnings out is kind of enabling this activity to spread and become normalized and really accepted and allow organizations in town to create volunteer groups to do illegal activities together,” Cohen explained.

While some residents are putting the fences up, others are trying to take them down. Pira said some residents who have attempted to take down illegal fences have been harassed by nearby property managers.

“If they go out and say, ‘I'm gonna cut down all this fencing,’ people will come out and harass them, even though technically they're in their rights by removing an illegal obstruction,” Pira said.

Though the fencing is primarily used to block unsheltered people from camping, DOTI advisory board members and housing advocates said it’s part of a larger conversation about keeping public areas public.

“The fencing has arisen as a symptom of a problem people have with the unhoused, encampments, and things along these lines. That which in itself is a symptom of a housing crisis we have, Pira said. “If we are able to get the department to enforce the rules as defined, there's still going to be a huge problem with right-of-way; we're going to have people camping in it, which is also illegal. So it's like one illegal problem replaced with another illegal problem.”

Correction: When first published, this story incorrectly mentioned Denver Safe & Sound instead of Citizens for A Safe And Clean Denver.