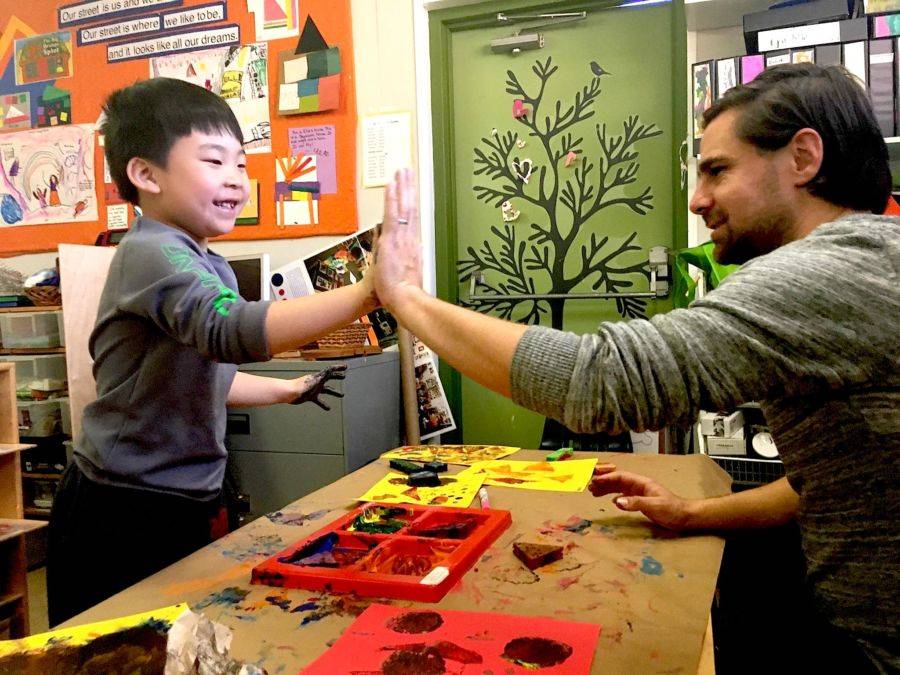 Graham Carson, a teacher at Denver Cooperative Preschool, finger paints with a student.

In their own words, the men described the journeys that led them to work in the early childhood field — as teachers, counselors, coaches and administrators.

One, a software salesman, helped his wife with a nannying job then decided to go back to school for an early childhood degree. Another discovered his passion for young children after visiting a friend’s Montessori school in Beijing. A third dreamed of being an actor, but switched gears after a volunteer stint at a campus child care center during college.

The stories are part of a new digital storytelling project focused on a tiny and often overlooked segment of the nation’s early childhood workforce: men. The idea is to provide inspiration in a field known for its low pay and high turnover — and create a support system of sorts to combat the isolation that can come from being the only man on the job.

“Depending on your personality, it can be kind of daunting, said Soren Gall, the former preschool teacher who spearheaded the project.

Men make up just 3 percent of preschool and kindergarten teachers, and 5 percent of child care workers, according to the U.S. Bureau of Labor Statistics.

Gall, an infant, toddler and family specialist at Denver’s Early Childhood Council, felt lucky to have worked with two male teachers when he taught preschool years ago at a University of Denver child care center. Still, he knew that most men in early childhood jobs lack male co-workers or even a network of male colleagues in the broader community.

He wanted to change that. For awhile, he organized coffee shop gatherings for Denver area men who worked in the field. He also launched a Facebook group called Men in Early Childhood Colorado.

Then, with two friends and $2,000 raised through an online fundraising campaign, he embarked on the storytelling project, which features interviews with nearly 50 men who work in early childhood around the country.

While there are other advocates who champion the cause of men in early childhood — such as Bryan Nelson who heads a MInneapolis-based information clearinghouse called MenTeach — Gall’s idea was to support men in the field through story-sharing.

For Graham Carson, a Denver preschool teacher who was interviewed for the project, it worked.

“It was super inspiring and cool to hear,” he said. “It’s good to get stories out there…maybe to encourage other men to give it a try.”

In the 10- to 30-minute audio clips, Gall’s subjects, including 18 from Colorado, describe the sometimes winding paths that brought them to early childhood education and the experiences that kept them there.

Several said they liked being able to shape kids during the critical early years when so much brain development is going on. Others said they appreciate the infectious energy and joy that come naturally to young children. 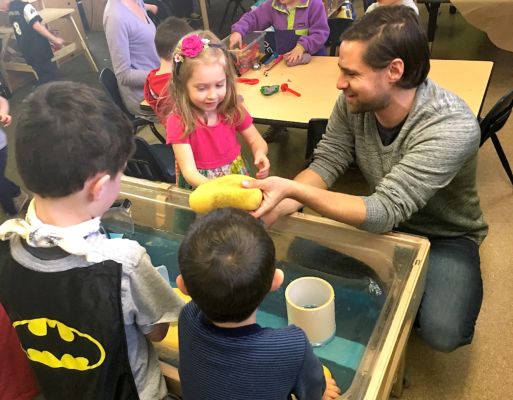 Tatenda Blessing, the interviewee who visited Beijing, said he discovered his passion for early childhood education when a little boy at the Montessori school approached him and said, “Hey, you’re my chocolate and I’m your cheese.”

Blessing, who is originally from Africa, was confused, but then the boy explained: “You are brown. I am yellow.”

“It was that moment that I just felt how these kids are beautiful,” Blessing said. “They’re so natural and pure in their approach to life … I said to myself I just want to be here.”

In addition to highlighting the fulfillment gleaned from early childhood work, many of Gall’s subjects touched on the benefits of men in the classroom — their different styles of play and communication, their ability to be positive male role models and the real-world gender diversity they bring.

“We’re a world full of men and women,” said Carson, who is “Mr. Graham” to the 4- and 5-year-olds he works with at Denver Cooperative Preschool. “I think it’s important to have a true reflection of our society helping teach kids.”

Travon Askew, a college student who’s worked in preschool classrooms, said, “All of us aren’t going to relate to a middle class caucasian woman … Just to have that male dynamic to relate to. To say I understand the functioning of boys and how they are because … I’ve been there before.”

Gall said such conversations about men in early childhood are particularly relevant now given the debate in Colorado and the nation about preschool suspensions and expulsions, which disproportionately affect boys of color.

He said bringing more men into the field could help reduce the use of such discipline tactics.

Perhaps a flip side to the benefits of having men in early childhood classrooms is the stigma that sometimes accompanies such a career choice. While some men say it’s gotten better, there’s still a sense that it’s not a masculine job. 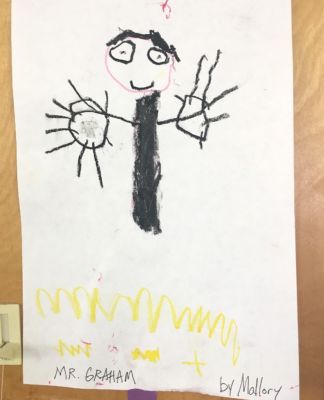 One of Gall’s interview subjects, Camron Morton, of Colorado, spoke about being careful to create acceptable physical boundaries between himself and his young students.

“I think it’s a little … more risky for men, I guess, to open themselves up to children,” he said. “If they want to sit on my lap, I find a way that they’re always sitting on something other than me, but I’m still able to be close to them.”

Not surprising in Gall’s interviews was the sentiment that low wages represent a major barrier to attracting more men to the field. (Poor pay is a key problem for women in the field, as well.)

“There’s a challenge for anyone going into the field to meaningful support themselves,” said Geof Byerly, an early childhood coach in Colorado.

Carson agreed. He believes he’s fairly paid, but said his wages pale in comparison to his wife’s salary as a technical writer.

For now, he said, financial sacrifice is part of life in the early childhood world. 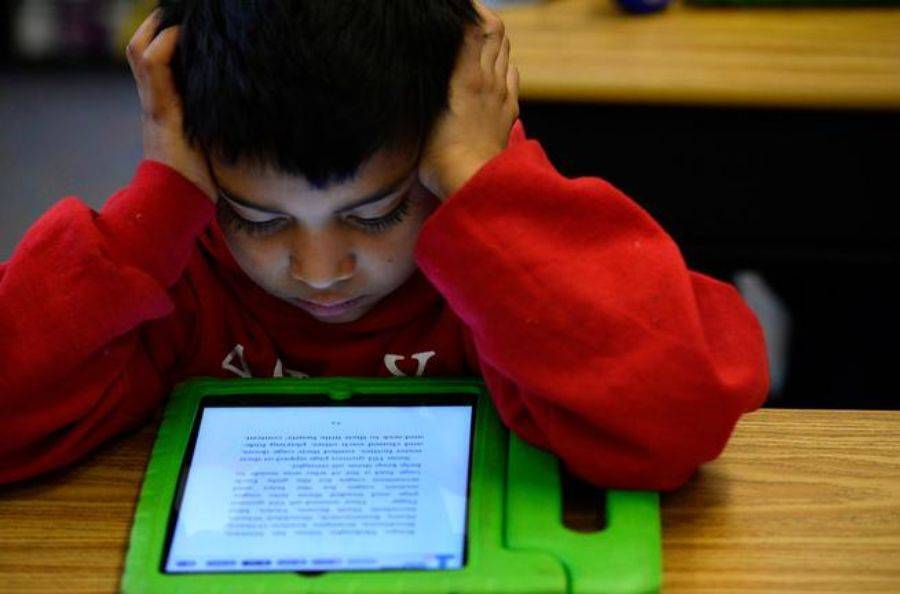 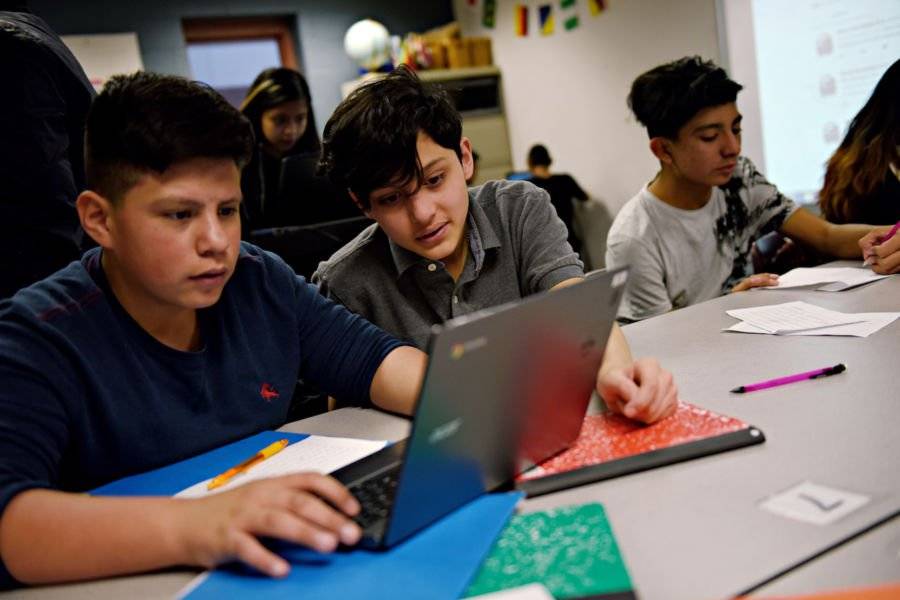