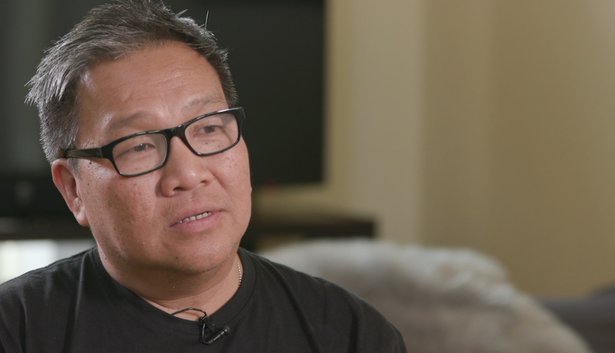 Micko Andereas during an interview with Rocky Mountain PBS

Micko Andereas was detained by ICE in August of 2018 along with his daughter after spending almost seven years waiting in line for his approved visa sponsorship to be finalized. His daughter was just a baby when the family left Indonesia amid religious violence, fearing they’d be persecuted because they are Christian.

Andereas said he spent the majority of his 71 days in the detention under quarantine because several men held in his dorm were sickened with chicken pox.

The quarantine meant he and the other men in his pod could not leave their living area for weeks. They missed recreation time, family visits, legal visits and court dates. He also said the facility shut off air conditioning to their pod and wouldn’t take their clothes and sheets to be laundered, so the smell quickly became unpleasant.

“We felt in there, like wow.. exhausted,” Andereas said. “No fresh air, no circulation.”

The Aurora facility is privately operated by the GEO Group.

Each quarantine period is 21 days, but Andereas said the clock restarted twice when two more cases of chickenpox were discovered. He said the detainees began to ask staff to find another solution.

“One time, we [did] not eat the dinner they tried to serve because we wanted to speak up together,” he said. “We are human in here! We need the same treatment as people outside.”

He said a few days after the mini-hunger strike, medical staff performed blood screening to determine which of the detainees already had immunity to chickenpox. Andereas said he was vaccinated years ago and was likely never at risk for getting sick.

He and his daughter were released from custody in October of 2018 and are working with an attorney to resolve their immigration case. But he said he still thinks of the people being held in the detention center, who continue to be quarantined.

“My heart’s still there,” he said. ”A couple of my friends [are] probably still there. These are humans, they have feelings same as me … they think of nothing else except [to be] released from that place.”

Andereas’s experience ended months before county health officials became aware of an “outbreak” of cases of chickenpox and mumps at the beginning of 2019.

Tri-County Health told RMPBS the detention center has reported 16 cases of chickenpox and 17 cases of mumps in 2019. Two of the people infected with mumps were staff members, as first reported by Sentinel Colorado.

Prior to that outbreak, facility staff were not regularly reporting cases of communicable diseases to Tri-County Health. Now that has changed, and Congressman Jason Crow’s office is also tracking disease cases and quarantines in its weekly oversight visits to the detention center.

ICE said detainees are now being offered MMR (measles, mumps and rubella) vaccines upon intake in Aurora, noting that there is a heightened risk of infections spreading in their facilities because detainees “can come from countries where communicable diseases are less controlled than in the U.S.”

“What really got me paying attention to what was going on is that we have police and fire who respond to the facility,” Hiltz said. “When our police and fire departments aren't notified of a communicable disease, they could then be leaving there and going to their next call, which could be a nursing home or a school or bringing that home to their families.”

The council voted in October to require notification, at a tense meeting that was disrupted by protestors. The demonstrators urged the city to do more to regulate ICE and GEO, the private company that operates the facility for the federal government.